Kharkiv: in anticipation of the battle for the monument to Lenin 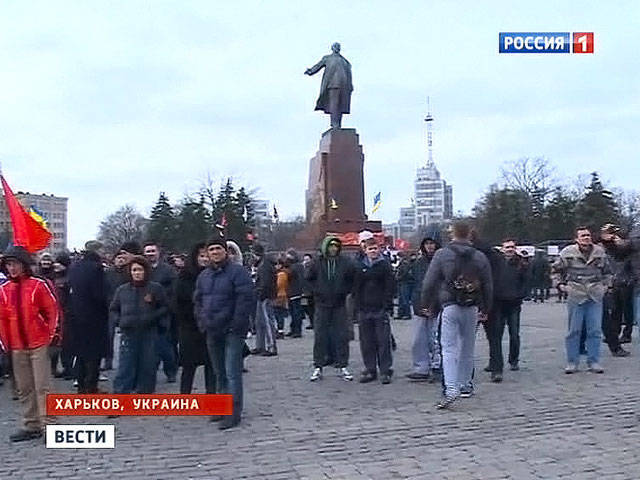 According to this hour, the governors of thirteen Ukrainian regions have resigned. Today, statements were written by heads of Kyiv and Sumy regions. At the turn of the confrontation of supporters and opponents of the Maidan is Kharkov now. Radicals with batons and fittings broke into the regional administration, breaking down the doors to the offices of officials.

And now a revolutionary assault force is moving to help them from Kiev. Kharkiv residents are also preparing for a fight - they organize self-defense units to meet extremists on the outskirts of the city. Story from the scene.

On the main square of Kharkov - the confrontation. Appearing maydanovtsy met resistance. Having seized the administration right off the baton - it’s just that the police didn’t touch them - revolutionaries demand that the governor and the mayor resign.

Managers are trying to somehow contain angry citizens. “They provoke you,” shouted the chairman of the Kharkiv regional administration, Mikhail Dobkin.

Everyone saw what happened at night. The coming radicals opened the offices of officials, fumbled around the safes and cabinets. In the office of the governor studied all the folders labeled "secret." And pictures - on cameras - showed that Yanukovych is no longer president.

The native Kharkiv citizens did not understand such impudence. "They are fascists, you see? They seized power! There are other people. Let them think about them, not about themselves. These are the people who stand behind the attendants brought to Kharkov to us!" - resents a man.

But the militants began with the seizure of the monument to Lenin. On the same Freedom Square. Weapon Kharkiv maydanovtsy extracted themselves. They just dismantled houses and fences built to celebrate the carnival on separate boards. Even sharpen did not have to.

In the morning, Vladimir Ilyich was released. Movement "Stronghold" and veterans of the Great Patriotic. By the way, the monument was also enclosed - the largest in Europe - twenty-one meters in height - with a fence. But according to their information, there are many thousands of revolutionary troops from Kiev. And on Tuesday, an indicative demolition is scheduled.

“I think no one needs to go here! If they come, then we will understand!” - says the mayor of Kharkov Gennady Kernes.

But the locals are not going to wait. Organize civilian patrols. And they intend to stop the rioters on the approaches.

So in fact, in Kharkiv now there is a dual power. The mayor and the governor continue to lead outside their buildings. Maydanovtsy not listen to them.

And Kharkovites are waiting for tomorrow. The battle for the monument to Lenin, here called the battle for Kharkov.

Ctrl Enter
Noticed oshЫbku Highlight text and press. Ctrl + Enter
We are
Riot dayKharkiv can not understand the actions of Kiev
Military Reviewin Yandex News
Military Reviewin Google News
106 comments
Information
Dear reader, to leave comments on the publication, you must sign in.