Someone talked years on high security 20, but in Ukraine it is not punishable 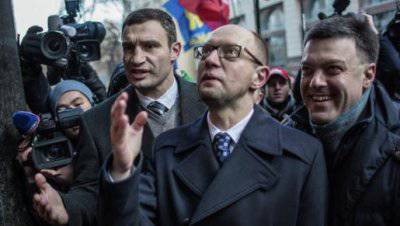 Today, the network is overflowing with laments and shouts of despair by representatives of those political forces who all this difficult time for the country destabilized the situation and carried to the masses the idea of ​​rebellion, revolution and other things thanks to which they should have come to power.


"All black crime authorities require a public investigation! And not only the facts of the use of excessive force in the destruction of peaceful protests, beatings or torture, but also the technology, methods, nature of these violence. Signs of atrocities ... Siloviki were prepared, had unhealthy excitement and cruel hatred towards people, regardless of their involvement in the protests ... "- beats hysterically Ruslana Lyzhichko, the one that 80 days calls the people to violence. Despite the bad rumors that she was warned on the night of 30 in November about the dispersal of the Maidan and disappeared, the stupid people of the Maidan continue to believe this incompetent careerist.

In general, everything is as usual - we will attack you, and you fight back and substitute the right cheek, then the left, while we complain to the USA, the EU, the UN, the Sex Reforms League, Greenpeace ... in short, wherever we can The fact that today recorded the use of firearms weapons Ruslana, of course, is unaware of the “peaceful” protesters other than their conventional “peaceful” weapons.

Our lady heavyweight (kilogram 90) of Ukrainian political Alexandra Kuzhel Also noted today: "Negotiations with Yanukovych gave nothing. Apparently, he decided to drown the country ",- she said. Negotiations, as the opposition understands them for themselves, are the approach of a five-year-old girl to meet their needs for sweets and toys. Give, but not that I will cry and ride in hysterics. Not a ride. Well - we will cry.

People's Deputy Lesya Orobets different rare mind and wild imagination. She issued today just a lot of such nonsense, that fit to call the vet.

“Yanukovych and his entourage organized purposeful provocation, a trap for the protesters. All the so-called peace negotiations were a clearly planned trap. They were aimed at delaying the time and preparing the military operation. Yanukovych was not going to make any concessions from the very beginning, not a single second, all the dances around the political process, backstage talks about changes to the Constitution - were only intended to lure the protesters into a trap ... "she writes on her page in the FB.

That is, today's “peaceful course” - an opposition MP clearly recognizes - was conceived from the very beginning as a provocation. And who brought the people there, it is interesting to know? They Yanukovych dragged under the walls of the Verkhovna Rada?

"In the center of Kiev, large reserves of police and internal troops were accumulated. Hired thugs drove up, they acted in unison with the golden eagle, throwing stones at the protesters and armed with armature. Tactically, the whole operation was planned to let the protesters into the government quarter and concentrated blows to cut them into isolated groups. If the task was not to miss the protesters to the Verkhovna Rada, there would have been a barrier in the old place - on Grushevsky Street ",- Ukrainian Napoleon and Hannibal in a skirt continue to think further.

Everyone knows that before that in Kiev there was no Berkut, no police, no internal troops. Today they brought from Jupiter. And, as Les is rightly complaining, why wasn’t the passage to Grushevsky not blocked? In a word - why did you let us go there?

The full impression of a complaint from the leading cow from the herd, which was brought to slaughter Human logic cannot explain the thoughts of Mrs. Orobets.

Just as it is not clear to me why these two clinical idiots are free Yury Lutsenko and Oleg Soskin. "KIEV, Stand up! Or a million will take to the streets for their freedom, or the dictatorship will drown thousands of insurgents in the blood of our future. Everything is decided right now", - This is a frank call for violence from a former top-level government official, who, except for the fight with the mayor of Kiev and the German policemen, was not noticed, should be finally noticed by the prosecutor’s office and the SBU of Ukraine.

But the second figure has spoken under US law for years already on 70. Let's listen to this wise (by the standards of marsupials) elder:

"Against the insurgent people, who defended the Constitution of Ukraine, the ruling regime of the gangster gave up heavy equipment and water cannons. Based on the experience of other revolutions, how can people act in this situation? We can assume that the insurgent people will take bulldozers and graders and lead them to these water cannons, while simultaneously setting them on fire with Molotov cocktails. People can also drive concrete trucks and tank trucks and send them to the Berkut fighters if they refuse to lay down their arms and stop killing and maiming the people of Ukraine. GUT "Berkut", where it may lead? Then all these fighters can simply pour the tanker and fuel and burn. Maybe it's time to stop defending the dictator and his golden toilet? "

A couple of thousand radicals, several thousand obviously mentally retarded, and the same number of simply homeless people who lived on Maidan all this time — the people of Ukraine? They came out to defend the Constitution of Ukraine, which for the most part no one read? Does sirir Soskin understand that he has already become an all-Ukrainian ridicule with his foolish analytics, which has no more relation to reality than the shaman’s tricks to determining the Nasdaq index?

If there are such economists and politicians in Ukraine, it is not difficult to understand why the country is permanently in such a deep hole. The level of ability to compromise, the silliest rhetoric and political, filled with lies, hatred and bile - calls, drown Ukraine and pull it to the very bottom of civil confrontation, from which the whirlpool exit may not be.