Waiting for a shock ("Polityka", Poland) 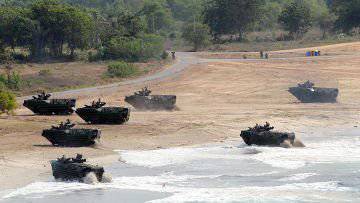 We live in an era of violent struggle for natural resources. The next stage will be the war?


It is said that armies and politicians always prepare for the war of the old type, and every new conflict catches them by their development. Therefore, in peacetime, military and political scientists devote a lot of time to forecasting, reflecting on what could trigger a new clash. However, they proceed from the assumption that knowing the cause, it will be possible to avoid conflict or, at least, to predict how it will unfold.

From the reports written by strategists and scientists for politicians, it follows that if bookmakers accepted bets on world threats (and perhaps someone already does this), the smallest gain would be on climate change or the shortage of minerals on which our civilization. The combination of these two phenomena would receive an even lower coefficient, since, in the words of the German social psychologist, the author of the essay “Climate Wars” Harald Welzer (Harald Welzer), would become the main social challenge of modern times.

Fortunately, there are still no global conflicts looming on the horizon, but governments and businesses are doing everything possible to insure themselves against (this concept has become very fashionable lately) of “raw material shocks” - analogues of “oil shocks”. They want to achieve this by protecting important trade routes for themselves, preserving privileges in international trade and sources of future supplies. It is difficult not to notice that with the end of the Cold War, we have entered the era of the struggle for resources, and the most worrying fact is that all new fronts are opening up in this war.

One of them takes place in the Arctic, along the peaks of the Lomonosov Ridge - an underwater mountain range that reaches the North Pole. Ice in the Arctic is melting faster, in summer, sea routes that cut the road between Europe, the Far East and North America by thousands of kilometers, become suitable for navigation without the use of icebreakers. Increasing the chances that in the coming 10 anniversary, despite all the difficulties that lie in these uncomfortable regions, it will be possible to have access to the still untouched deposits of oil, gas, gold, diamonds and other riches at the bottom. Therefore, the Arctic states are engaged in heated debates about the precise holding of the borders of their economic zones, and the key element here is the Lomonosov Ridge, for which Russia and Denmark make claims. In 2007, the Russian bathyscaphe studied it, hoisting the titanium flag of the Russian Federation under the pole and taking samples of rocks to prove that the ridge, and, accordingly, the zone under the pole is a continuation of the Russian continental shelf. In 2012, a similar expedition was organized by the Danes. Anyone who succeeds in convincing the UN Commission on the Limits of the Continental Shelf will receive a piece of the Arctic for exclusive use.

Although the Arctic countries occasionally exacerbate rhetoric and signify their presence in the far north, in general, the discussion around the Arctic is rather peaceful. Especially if you compare it with the moments of tension arising during territorial disputes with the raw material background in other regions of the world. Discussions are underway in the Mediterranean, where Turkey and Cyprus cannot reach agreements on newly discovered gas fields; The UK retains control of the Falkland Islands (Malvinas), where oil should be the reward for tough resistance to Argentina.

There are worries over the skirmishes of China, Taiwan, South Korea, Vietnam, Brunei, Malaysia and the Philippines over the nationality of several archipelagoes of small uninhabited islands, around which there may be valuable deposits. Because of this, in the Far East and Southeast Asia has not yet been able to deploy an integration project similar to the European Union. There is no at hand reconciliation model modeled on the Franco or Polish-German rapprochement, and the fighting spirit remains much hotter than in Europe. In addition, it is accompanied by intensifying anti-Japanese nationalism in China and resurgent imperial nationalism in Japan.

Since the Japanese government bought the private owners of Senkaku Island (in China, they are called Diaoyu) in September of 2012, a month has not passed without a demonstrative exit of the coastguard of one of the parties or flight (at least research aircraft). After the islands were bought, protests were made by residents of hundreds of Chinese cities, a wave of pogroms of Japanese shopping centers and restaurants, as well as arson of Japanese cars, including police officers, swept across China. Japanese automotive and economic giants have suspended production at factories in China, and Chinese tourists began to boycott Japan.

An armada of fishing boats and patrol ships headed for the islands fleet, ships arrived from Taiwan, which also considers the islands to be their own armada. The Tokyo stock exchange reacted with panic and fall, frightened analysts immediately said that a dispute with China could cost Japan more than the 2011 earthquake. So far, the predictions have not come true, since both countries avoid direct military conflict, but at every opportunity they resort to a rich arsenal of provocations and mutual accusations.

Because of the dispute around Senkaku / Diaoyu in 2010, Japan suspended the import of rare earth metals from China for two months and began to look for new suppliers, planning to open its mines in Australia, Mongolia and Vietnam. The imbalance between suppliers and customers is in many countries the same concern as territorial disputes. This phenomenon is familiar to Europe, which has experienced gas crises caused by Russia. In one 2009 year, 18 of European countries experienced their pain on their own experience when Moscow closed the valve to Ukraine. Both rare earth metals (due to the limited scale of their extraction) and natural gas (because it goes through pipelines) play an excellent role as an instrument of political pressure. In the case of gas - to transit countries. Therefore, they (like Poland in Swinoujscie) are trying to build gas terminals in order to use liquefied gas, which is transported by water. It costs more, but there is no risk that someone will block the pipe. The pipeline limits the choice of suppliers, and liquefied gas, like oil, can be brought from any place. Of course, subject to the functioning of ocean shipping. Now the guarantor of its safety is the American fleet, which monitors the passability of many bottlenecks of maritime trade, including the Strait of Hormuz, which is the fifth part of the oil produced in the world. Other states, especially those that depend on trade with China, are also developing their fleets.

One of the strategies that should help to insure against the shortage of resources or the cessation of supply is the transition to self-sufficiency (if you have your own deposits). It happens that the leadership of states where foreign companies are engaged in the exploitation of natural resources does not restrain nationalization impulses. In 2012, Argentina nationalized the country's largest oil company, since its former Spanish owner invested little in the development of the enterprise than doomed Argentines to import oil. The debate on the nationalization of the mines goes to South Africa, and Zambian President Michael Sata (Michael Sata) earned political points by criticizing the Chinese presence in the Zambian mining industry.

In the predictions of the political, economic, and military future of the world in an era of changing climate, bad predictions invariably sound about Africa. A new race is unfolding there, practically repeating the colonial struggle for who will stake out the most valuable deposits for itself, which nature hasn’t spared to bestow on Africa. The first violin is played in this area by the Chinese: as early as the 1990s, they were ahead of all the world's competitors, successfully winning over the position of African leaders and obtaining production licenses. However, the main problem of the continent is not associated with a decrease in reserves of natural resources. On the contrary: conflicts erupt in regions where there are many of them, as in the Congo. Dramas are associated with such resources, which usually do not act as a subject of interest of geologists.

Compared to what is happening in Sudanese states, the Arctic and the strife in the Far East look insignificant. “Sudan is the first time that one can say that climate change has become a direct cause of civil war and a wave of violence,” writes Harald Welzer. During 40 years, the desert in Sudan moved 100 kilometers to the south, and desertification is also felt in neighboring countries - Chad, the Central African Republic, parts of Kenya and Ethiopia. Their inhabitants struggle every day for their lives: they are practically all livestock-raising and painfully endure droughts that visit the region with merciless regularity, destroy herds and restrict access to water sources. The shepherds' tribes, competing for access to watering and good pastures, are taken for weapon, and from here - one step to the civil war, as in the case of the secession of South Sudan or the genocide in Darfur, and earlier - the massacre in Rwanda. Of all these places, millions of refugees fled, often referred to as "climate".

The changing climate and the classic commodity shock led to the largest political transformation of recent years. In the 2010 year, a wave of heat swept from Russia and Ukraine to Kazakhstan, yields were poor. As a result, Moscow began to look for suppliers of grain, and at the same time introduced duties for the export of wheat with Ukraine. The situation has interested speculators who have felt the coming price increase. It happened at the turn of 2010-2011's. Food in the world was more expensive than ever in the previous two decades, and this was true for cabbage in Korea, and chili pepper in Indonesia, and onions in India (the basics of local cuisines). The price increase was most pronounced in countries importing large amounts of grain, primarily in the states of northern Africa. Expensive food served as a catalyst for the so-called Arab Spring, which overthrew the leaders of several countries and brought civil war to Syria. Such a development was foreseen by the Food and Agriculture Organization of the United Nations (FAO). This is a good lesson to show that expert predictions sometimes come true.

In terms of future wars, fortune tellers see in their crystal balls not so much inter-state conflicts, but rather state coups, revolutions, civil wars, the rapid growth of a wave of refugees, which will lead to toughening of immigration legislation in countries that have been spared. However, the consequences of Hurricane Katrina in New Orleans showed that even the richest countries are not immune from future changes, because even the United States could not prevent the destruction of one of their cities.

“Can water scarcity cause the Third World War?” Professor Michael Klare from American Hampshire College recently asked. Unfortunately, Claire, who studies raw shocks, does not give an answer to this question, but points to the growing importance of water in world politics. Disputes over the principles of using large rivers have become a political leitmotif on the Nile, Mekong, Indus and the rivers of Central Asia, where due to the construction of dams, downstream countries are deprived of sufficient water. How serious a source of tension can be hydrological projects show UN calculations, according to which, by 2025, two thirds of the world's population will live in areas threatened by water scarcity. The most problematic regions in this sense are South America, Central Asia, as well as the two most populous states of the world - India and China. So maybe bookmakers should bet on the water?