February 15 2014
62
One of the reasons that the “cold” war never became “hot” was the undoubted strength of the Soviet Army, which made even the most violent heads in the West think about the consequences of a possible aggression. At the same time, they were not only afraid of the number of potential adversaries - even Suvorov implemented the principle of “fight with skill.” And with him - that is, taking into account modern realities, with the quality of weapons - the Soviet Union was all right ... 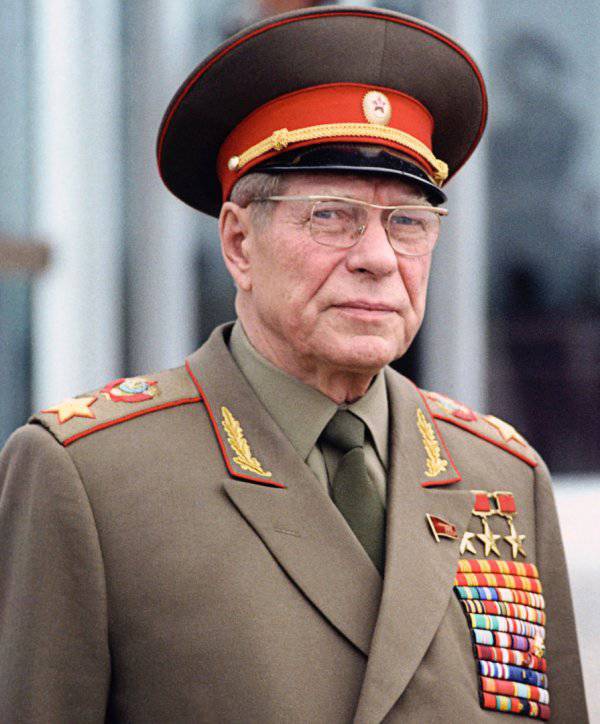 Of course, thanks for this we need a generation of military experts who for decades have been forging the combat power of the army. But nevertheless, it is impossible not to single out the special role that Dmitry Fedorovich Ustinov played in this difficult and intense work, and long before he became Minister of Defense - and one of the best in this post. Curiously, he was not a commander in the traditional sense of the word - he did not lead the regiments to attack, did not command large units, but coordinated the actions of the military-industrial complex. And, as it turned out, it was his management decisions that played a huge role.

However, Ustinov also managed to make war. He was born in the family of a worker who fled from hunger from his native Samara to Samarkand. There, in 14 years, the future marshal became a fighter of the special purpose unit, a Komsomol member, fought with the Basmachis in the ranks of the 12 th Turkestan Regiment of the Red Army. But there were enough skilled craftsmen to swing a sword and shoot a pistol - the young republic, which was in a hostile ring, no less required qualified military-technical specialists without the burden of the "old regime" past, but there were not enough of those then. Like many of the best Komsomol members, Ustinov, who was already in peacetime, on 1920, graduated from a vocational-technical school, the mechanical faculty of a polytechnic in Ivanovo-Voznesensk, the Baumanskoe School and the Leningrad Military Mechanical Institute, also strove to become an engineer. The young specialist received an excellent training, and she was useful to him more than once.

He began his “technocrat” way with the Leningrad Artillery Marine Research Institute, became the head of the department, gave a good account of himself and in 1938 was appointed director of the Bolshevik plant (the former Obukhovsky steel foundry), which supplied the army with guns. There, 30-year-old Ustinov showed himself as a tough, but competent leader, who was able not only to make effective decisions, but also to find new technological moves. His success in the very first year was marked by the Order of Lenin, and at the beginning of 1941, he was appointed Commissar of Arms and from that time began to play a leading role in the fate of not only the army, but also industry. It is worth noting that in the most difficult years, Ustinov not only provided the troops with the necessary amount of equipment, but, as the outcome of the war showed, achieved more tangible success than his German “colleague” Albert Speer, who also began to lead the military industry at a young age. As we see, the trust that Stalin felt in the first “purely Soviet” generation of managers turned out to be not in vain ...

In the post-war years, the development of the most advanced types of weapons, above all, missile weapons, which he supervised the creation of as the representative of the USSR Council of Ministers, was associated with the name of Ustinov. Ustinov determined the most promising projects with a gaze of an engineer, tried to get them to pass the test tests as soon as possible and enter the army. He was also behind the development of the first Soviet nuclear submarine, the C-75, C-125, C-200, C-300 air defense complexes, and in 1970 through its efforts the Navy became the most powerful history country.

The appointment of Ustinov to the post of minister in 1976 was perceived ambiguously as in the army, where they would like to see a fighting general on this post, and in the West, where they decided that the engineer-manager would not be particularly dangerous. But it was under Ustinov that significant changes occurred not only in the structure of the army, but also in the military doctrine. The new minister decisively broke with the traditional approach, which was to create an armored "fist" and increase readiness for a fierce, but non-nuclear war in Central Europe and the Far East.

Ustinov made a bet on tactical and operational-tactical nuclear weapons, and chose the European direction as strategic. It was with him that the medium-range monoblock missiles R-12 (SS-4) and R-14 (SS-5) were replaced by the latest development of the RSD-10 Pioneer (SS-20). In the early 80s, OTR-22 and OTR-23 Oka tactical complexes began to be deployed in Czechoslovakia and the German Democratic Republic, allowing them to “shoot through” the whole of Germany, which, in the event of the outbreak of war, would be the first to become a theater of military operations. Under the leadership of the minister, the Topol and Voivode intercontinental ballistic missiles were developed, the army received Tanks A T-80 with a gas turbine engine, BMP-2 and BMP-3 infantry fighting vehicles, Su-27, MiG-29, Tu-160 aircraft, an airborne combat vehicle capable of landing with the crew, aircraft-carrying cruisers ... Then in the USA and NATO began a real panic: they had to hastily change their plans and prepare not for an attack, but for a limited nuclear conflict in Europe, where they would be a defending side. Fortunately for the whole world, this never happened, but Ustinov spoiled a lot of nerves to his western opponents.

Eight years, during which he headed the Ministry of Defense, were marked by the most active use in military affairs of all the achievements of the scientific and technological revolution. Then, in fact, weapons were created, which remain relevant to this day and serve as the basis for further development. The Soviet military industrial complex, combining the most advanced scientific and technological approaches, became the best monument to Marshal Ustinov, and not his fault that later many of the things created under his leadership were simply destroyed ...

Ctrl Enter
Noticed oshЫbku Highlight text and press. Ctrl + Enter
We are
Congratulations on the 285 anniversary of the birth of the Great Russian commander Alexander Vasilyevich Suvorov!Minister of Defense Stalin hardening
Military Reviewin Yandex News
Military Reviewin Google News
62 comments
Information
Dear reader, to leave comments on the publication, you must sign in.