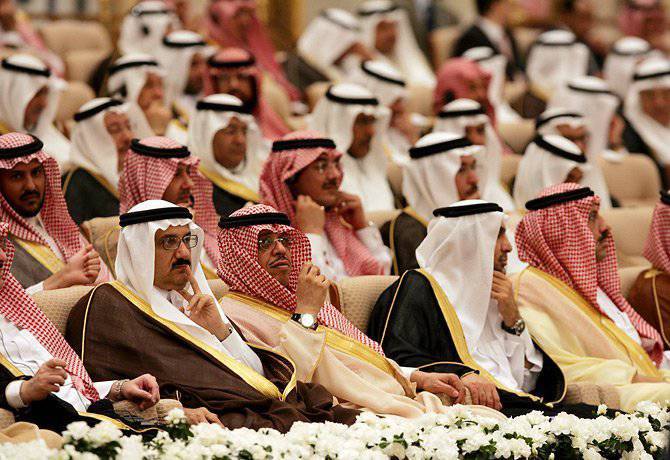 The actual failure of the international conference on Syria in Montreux and the ensuing negotiations of the delegation of the SAR government and the Syrian opposition once again showed Saudi Arabia’s insistent desire not to reconcile the conflicting parties, but to dismiss the B. Assad regime in any way. At the same time, KSA launched battles at once in three theaters of “combat operations” - in Syria, Iraq, and against Iran. The reasons for this are fairly commonplace - in Riyadh they were really afraid that these three countries with a predominant or significant Shiite population might unite against the bloc of Arabian monarchies led by the Saudi kingdom, which belonged to the GCC regional organization, with Jordan and Turkey that joined it. All this, according to the “strategists” of Riyadh, grouped around the head of the KSA special services, the secretary general of the national security council of the country Prince Bandar, can lead to a shaking of the foundations of conservative Arab monarchies of the Persian Gulf, weakening their role in the region, increasing mood towards democratic changes. Especially against the background of the fact that Iran is confidently following the path of normalizing relations with the United States and the West, while Saudi Arabia is increasingly associated with the radical Islamist movement, which often joins with terrorist organizations fighting in Syria and Iraq.

Only now the Saudis have forgotten that it was they themselves who triggered the processes in the Middle East, which many analysts interpret as the creation of a “Shiite arc” or a “Shiite crescent”. Starting from Egypt and Libya, where KSA, Qatar and several other GCC countries actively supported the Islamist opposition and extremist speeches, which led to a change of moderate regimes, Saudi then decided to take over Syria, but it broke down. In Riyadh, they did not calculate that Damascus would be actively supported by Moscow, Tehran, Baghdad, the Lebanese Hezbollah, as well as by the majority of the Syrian population, which does not want to live by the rules of Wahhabi sharia. Moreover, in Riyadh they still openly climbed into intra-Iraqi affairs, although the legitimate government of the Shiite majority ruled in Baghdad, and began to bully Tehran with calls for the United States and Israel to strike at Iran’s nuclear facilities. As a result, Syria, Iraq and Iran were forced to defend themselves against such brazen intervention, combining military and political resources. At the same time, this is not about creating some kind of formal alliance of these three countries, but rather about coordinating efforts in the face of the aggressive behavior of the Sunni axis formed by Saudi Arabia. It is not a secret that in the conditions of open intervention of the KSA in the armed conflict in the SAR, including the financing of the rebels and the supply of them weapons, Iran was forced to send its soldiers as instructors to the Syrian army, the IRGC officers guard President B. Assad, the Iraqis sent fighters and volunteers of the militia unit Mahdi Army to Shiite leader Mustafa Sadr to Syria, and Hezbollah repeatedly introduced its units into the Syrian territory for helping the Syrians to repel opposition attacks and mercenaries. In addition, Tehran regularly provides military-technical assistance to Damascus, but this fits well with the norms of international law, unlike those of Western and Arab countries that supply weapons to illegal military groups of militants of extremist organizations in the UAR.

Continuing such a short-sighted policy further, Saudi may receive a tougher response in the form of a military alliance of Iran, Iraq, Syria and Hezbollah. Moreover, such a prospect has already caused irritation of the United States, which recently decided to send unmanned aerial vehicles to Iraq to attack terrorist bases of the extremist organization Jabgat al-Nusra, which invaded the western regions of Iraq from Syria. This is a signal to the KSA not to cross certain “red lines”. Apparently, these issues will be on the agenda of the talks of President B. Obama, who has gathered on a trip to this region. Yes, and more moderate forces in Riyadh itself have already responded to a powerful wave of criticism of Saudi policies to support overly radical Islamists. On January 30, King Abdala passed a decree on the punishment of imprisonment up to 30 years of those citizens of the kingdom who were engaged in mercenarism abroad, and the Supreme Mufti KSA condemned radical Salafism.

In Riyadh, they should understand that further games with fire in the outside world can ricochet to return to Saudi, which is already experiencing a difficult period of its existence. King Abdale is already 89 years old and he's sick. The Crown Prince is a little younger, but also sick. And the next generation - the grandchildren of the king - the founder of the Saudi state is also already aged. Many of them are either closer to 70 years, or already for 60. And they are keenly competing with each other. Especially trying Prince Bandar, who has a serious drawback - he was born from a concubine, not his wife. And the Shia population of KSA, concentrated in the Eastern Province, where 85% of the country's oil is produced, is increasingly raising its head, dissatisfied with discrimination based on religion. In the south, in the province of Najran, inhabited by the Shiite Ismaili sect, the mood of discontent is also growing due to the imposition of Wahhabi living standards on them. In Al-Asir, adjacent to Yemen, Yemeni tribes, whose numbers are close to 3 million, are raising their heads. And in Hejaz - the western province of the kingdom - there is noticeable discontent of local businessmen who want equality in doing business with representatives of businessmen from the royal family.

So the region of the Persian Gulf is waiting for interesting and turbulent times. The main thing that will be decided is the fate of Saudi Arabia. Will it be able to remain a single state when the generation of rulers changes or will it fall apart into several parts? After all, the kingdom was created artificially 80 years ago on the fragments of the Ottoman Empire, with the active assistance of the British Empire. And here such powerful players as Iran and Iraq quickly come to the scene.