Sweden will be out of neutrality

March 31 2011
2
Looks like Stockholm decided to quit 200-year neutrality. Sweden at one time was a powerful military power, more than once smashing the European powers - Denmark, German states, Poland, Russia. Only after a series of defeats from Russia (after the last in 1808-1809, they had to yield to Finland) did Sweden become a neutral country and did not participate in the First and Second World Wars (only indirectly, for example, Germany supplied iron ore).

29 March, according to Agence France-Presse, citing a statement by Prime Minister Fredrik Reinfeldt, Sweden announced its intention to join the military operation against Libya.

Sweden is ready to provide NATO allies with eight Gripen fighters, a military transport ship Hercules and a reconnaissance aircraft to participate in maintaining a no-fly zone in Libya. In the near future voting on this issue will be held in the Swedish parliament. As noted by Reinfeldt, the leadership of the North Atlantic Alliance appealed for assistance to the Swedish government on Tuesday. 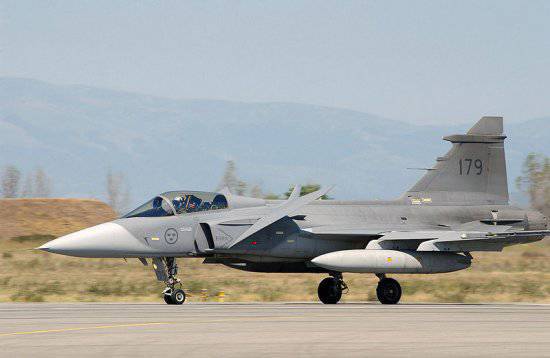 This “step” of Stockholm cannot but excite Moscow, given our centuries-old clashes in the past and the proximity of Sweden to our borders. Stockholm will become a direct ally of the military-political bloc of NATO, and then, possibly, will enter into it. And NATO is our direct possible adversary. This will worsen our position in the Baltic and the Arctic.

True, in recent years the neutrality of Sweden, like non-bloc Finland, has become very conditional. They are in the NATO Partnership for Peace program. NATO forces are increasingly conducting exercises on Swedish territory. Two years ago, Sweden and Finland agreed with alliances Norway, Denmark and Iceland to jointly patrol maritime borders in the Arctic, creating joint naval forces and a rapid reaction squadron.

At the beginning of 2011, a meeting was held in London with the participation of the British, the Baltic countries and representatives of all five Nordic countries. It was about strengthening military cooperation in the Arctic and the Baltic Sea. The organization has already received the name "Arctic mini-NATO". Apparently, NATO’s Secretary General and former Danish Prime Minister Rasmussen and the head of the Swedish government Reinfeldt will discuss its future contours.

Unlike a number of countries that joined NATO after the collapse of the USSR and became a “wagon train,” Sweden will become a valuable combat unit. Sweden has a strong military-industrial complex and an army. In recent years, it has risen to 7-place for sale weapons. The buyers of Swedish military-industrial complex products are the Netherlands, India, Pakistan, South Africa, Latin America, South Korea and even the United States and the United Kingdom.

JAS 39 Gripen fighters (the ones that are ready to fly to Libya bombing), the CV90 infantry fighting vehicle and the ARTHUR artillery radars have gained special fame. The Swedish military-industrial complex also produces helicopters, submarines, surface ships and radars for them, early warning systems, Tanksself-propelled howitzers, man-portable air defense systems (MANPADS). The Swedish submarines are considered the best in the world, in the "conditional battle" they defeated the multi-purpose submarines of France and the United States.

The number of Swedish army is 25 thousand people, but the local General Staff has developed a plan to quickly double it. Armed with the Scandinavian military machine consists of 165 combat and 102 auxiliary aircraft, over 50 surface ships and five submarines. It is noteworthy that the decisions to increase the combat power of Sweden and enhance cooperation were taken after the war in South Ossetia.

By itself, of course, Sweden is not an adversary of Russia; it is currently incapable of large-scale war, but as part of NATO, it is a powerful and valuable unit that really strengthens the bloc. Yes, and its entry into NATO, or at least support for NATO's actions, means that the US strategy on encircling and "strangling" Russia is close to completion. And in this sense, the end of the era of Swedish neutrality is very unpleasant for us.

So, according to Anatoly Gypsy, the head of the Center for Military Forecasting of the Institute for Political and Military Analysis:

“If Sweden enters the North Atlantic alliance, this will create many problems for Russia both in the Baltic and in the Arctic. Thus, in the north, near our borders, a joint Swedish-Norwegian strike force will appear, theoretically capable of opposing our Baltic and Northern fleets. Today, NATO is increasing its presence in the Arctic. And the addition of Sweden to the alliance in this regard is a very unpleasant signal for us. ”