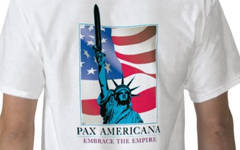 And whoever the United States found guilty, it is impossible to stop the process

The operation to protect civilians in Libya as it develops more and more clearly becomes an attack directly on Gaddafi. Today it is almost obvious that the goal of NATO is precisely the overthrow of the legal Libyan leader, and this causes sincere astonishment. Yes, he is a difficult person to communicate, but in recent years he has shown enough loyalty to consider him an adequate leader. And today, who overthrows him? A group of people, among them - such a number of criminals and terrorists that captures the spirit. The same NATO gives them weapon, clears the way - and as a result, it strengthens the positions of fundamentalist Muslims, and openly terrorist organizations, and shatters the situation in Europe, where a new shaft of refugees has already poured, and ... Yes, a lot more. And, I ask, why? Qui, so to speak, prodest?

I partially tried to answer this question in the previous text dedicated to Libya, but something remained “behind the scenes”, something became clear recently ... And now it makes sense to talk about it. First of all, it should be noted that geopolitical processes are extremely slow, and what is happening now was laid out a couple of years, or even more years ago. And what is happening now will not appear soon. So remember what happened then.

A new president came to power in the United States, from the new party, which decided to change the force as the main argument of world politics to create local coalitions. Accordingly, he began to put together these coalitions, based on the resources that he then had, and a clear understanding that these resources are not going anywhere. This was the main mistake, as it quickly became clear that resources were becoming less and less. Familiar with our theory of crisis, it would become immediately clear, but in Washington they do not read books (more precisely, they read only “their” books).

As a result, Washington’s foreign policy began to receive blow after blow, and most importantly, its regional competitors began to grow: China, India, and Turkey. No, for the most part, they did not at all strive for active confrontation; they simply, one by one, intercepted the levers of control over regional processes. At the same time, the foreign policy machine of Washington continued to spin and missed more and more often.

The funny thing is that at the same time it destroyed what Bush and the Republicans managed to create (since the methods by which these results were achieved contradicted those used by the new owners of the White House), and the new created little, due to the obvious inadequacy of resources and situations of desire and ambition. And at some point, namely after the elections, as a result of which the Republicans began to regain their participation in US foreign policy, it became clear that something had to be done with this.

In particular, it was found that Obama had a strong quarrel with Israel, which, in turn (and what to do?), Began to "be friends" with China. And at the same time, both of them more and more controlled North Africa with its oil and gas reserves. There is enough oil and gas in the United States, but Europe ... With it, too, serious problems arose, since the European Union largely lives on exports to the United States, and the latter began to "block the vent." So far only a little bit, but the process will intensify as the crisis develops, and this means that the US monopoly in the region may come to an end. And in this situation, the one who gives Europe raw materials can take control in the EU as a whole or in individual countries. China has already begun to do this (through the redemption of debts of problem countries), Russia also participates in the process through the construction of gas pipelines. In such a situation, the excessive friendship of China and Israel with the countries of North Africa becomes critical for the United States.

Historically, these regimes were close to the United States, but, firstly, this proximity went through Republicans, and therefore could not be supported by Obama with his foreign policy tools. Secondly, Obama has greatly reduced his authority over the past two years, promising a lot of things, but fulfilling almost nothing. Regimes thought - and made their choice, which means whether they like it or not, they realized in Washington that they should go "for demolition", because their new orientation could not suit not only the current, but also any leaders of the United States.

The question of whether the United States could return the levers of control remains open. Maybe they could, but for this you need to wait for the elections, when the Republicans finally take control of foreign policy into their own hands. In the meantime, Obama was powerless to resist the expansion of China (with the help of Israel) in the region, and he could no longer wait. Then the technology was already beginning: there - to push a little, there - to throw weapons, here - to organize a couple of provocations. ... And that’s because the objective problems in the region were in sufficient numbers. Another thing is what to do next.

Stable regimes have already been partially destroyed, some will be demolished in the near future, because otherwise they will certainly come under the control of China as the only security guarantor. Albeit formally pro-American, but much weaker regimes came to power, which inevitably would destabilize the situation and further undermine the stability control system. When the Republicans come to power, they will find that the only chance to do something is to send troops, but the United States will not pull another Afghanistan or Iraq. And who will be to blame?

You can certainly say that Obama. But in fact, the objective process of the collapse of Pax Americana is underway, and whoever the United States later finds guilty, it will not be possible to stop him.