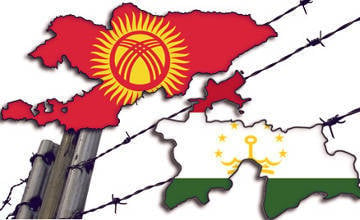 The conflict on the Tajik-Kyrgyz border, like a snowball, is overgrown with new details. And the essence is no longer in the problem of delimitation and demarcation of the border, but in who started the bloody skirmish first. The charges throw each other heads of state, diplomatic officials, military ranks.


The Ministry of Foreign Affairs of Tajikistan placed all responsibility for the incident on Kyrgyzstan, which, in turn, accused Tajik border guards of provoking the conflict. “Tajikistan is attempting to stop Kyrgyzstan’s activities to ensure independence,” said parliament deputy from Ata-Zhurt faction Ulukbek Kochkorov, and Kyrgyz Deputy Prime Minister Tokon Mamytov officially stated: “For the time being, I regard the incident as a border incident. But as a citizen of Kyrgyzstan, I regard this as a gross violation of the border of Kyrgyzstan, penetration of our territory, illegal use weapons and endangering the safety of Kyrgyz citizens. A major came - the head of the special division of the Tajik border guards and put a gun to the head of our border guard, demanding the termination of the construction of the road. He shoots a border guard who reminded him of the illegality of his actions; moreover, the Tajiks are still firing on our territory with mortars ... ”.

The Tajik authorities and the media, in turn, claim that the first shot was made by the Kyrgyz side, and they are doing their best to make Kyrgyz border guards bandit. The Ministry of Foreign Affairs of Tajikistan, trying to get ahead of the Ministry of Foreign Affairs of Kyrgyzstan, spread the information that the Kyrgyz border guards were the first to shoot. It seems to be from the Tajik side killed two, injured 17 people. There were also such journalists who recalled that the same Tokon Mamytov himself was capable of provocation, it was he who last year warned that the government does not exclude the possibility of using weapons to restore order in the Issyk-Kul region. “... We do not intend to protect the population with a newspaper or a branch,” the official said then from the authorities.

And then there were rumors that the Tajik authorities were trying to declare land purchased by the Tajik peasants in Kyrgyzstan. According to a resident of the village of Ak-Tatyr, Batken District, Baktybek Dubanaev, in a place where an armed conflict occurred between the border guards of January 11, along the Isfara River more than 70 acres of land were bought by citizens of Tajikistan. At the same time, the land is still considered the territory of the Kyrgyz Republic, but the Tajik side has plotted this land on itself. Sources from the regional administration of the Batken region reported that one person owns the sections along the river and develops them through intermediaries - Deputy Chairman of the Sughd region Zhumabai Sandinov. And this is not the first case of the purchase of Kyrgyz land by Tajik civil servants. The construction of the Kulundu-Maksat road was previously suspended in Leylek district, bypassing Tajikistan, the route of which passes through two hectares of land owned by the deputy prosecutor-general of Tajikistan.

Passions, as they say, run high. It comes to the fact that the perpetrators are looking on the side. Khudoyberdi Kholiknazarov, director of the Center for Strategic Studies (SRC) under the President of Tajikistan, did not rule out that in this conflict there is the influence of third forces that are beneficial to sow distrust between two friendly countries. “This problem has not arisen today. Of course, there are third forces that fueled his [conflict]. This is all clear, ”said the head of the Center.

Looking at what is happening, many skeptics say that this conflict was expected. And before that, clashes took place in the border areas, but the authorities usually considered them to be conflicts of local importance, for the most part domestic and domestic. Negotiations were conducted with a diplomatic delight: some courtesy and no responsibility. It is no coincidence that Deputy Prime Minister of Kyrgyzstan Tokon Mamytov said that in seven years of negotiations, progress on the border issue is zero.

“To blame the mirror if it’s crooked”, these words of the Russian fabulist fit well with this moment. Both sides are to blame for what is happening in the border area. But no one wants to admit it.

Ctrl Enter
Noticed oshЫbku Highlight text and press. Ctrl + Enter
We are
Territorial claims: who wants how much from Russia
Military Reviewin Yandex News
Military Reviewin Google News
35 comments
Information
Dear reader, to leave comments on the publication, you must sign in.