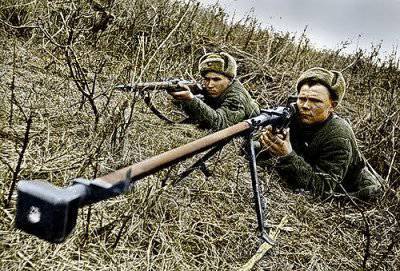 German General R. von Mellenthin in his memoirs about the Eastern Front wrote: “It seemed that every infantryman had an anti-tank rifle or anti-tank gun. The Russians skillfully disposed of these funds, and it seems that there was no place where they did not exist. ”

Of course, only artillery could fight the enemy tanks most effectively. However, in this article we would like to consider more simple, "manual" means of dealing with steel monsters, those that were in service with our infantry.

Try to jam the tower and weapon tank. The engine of the tank is cooled by air that flows through special slots. All movable joints and hatches also have gaps and leaks. If a flammable liquid is poured through these slots, the tank will catch fire. For observation from the tank there are viewing slots and devices with hatches. Cover these gaps with mud, shoot at them with any weapon to jam the hatches. Try to kill the tank caterpillar. As soon as the servant seems, beat her with more help: a bullet, a grenade, a bayonet. To reduce the mobility of the tank, arrange anti-tank obstacles, put mines, land mines ".

What did the infantry have?

Soviet soldiers acted in accordance with the instructions of this small and simple textbook, and achieved notable success. For the destruction of enemy armored vehicles, our fighters widely used incendiary bottles, mines, hand grenades, anti-tank grenades, anti-tank guns. However, in the first months of the war, only mines and grenades were the only means of fighting infantry against enemy tanks. With anti-tank rifles - a powerful and reliable weapon in the capable hands of a tank destroyer, the cover plate was originally released, but more on that below.

Initially, anti-tank grenades were simply given out to those soldiers who were capable of accurately and, most importantly, throwing them far, after which the soldiers, armed with grenades, were evenly distributed along the line of defense. In the future, the actions of tank destroyers became more active and organized. They were united in groups for which special training was conducted. During the battle, the group of tank destroyers no longer expected a direct attack in their trenches, but moved directly to the place where the danger of a tank breakout occurred.

Such actions justified themselves in the battle of Kursk. When 5 July 1943, the German steel avalanche tanks began to attack, they were met by pre-formed detachments of tank destroyers, armed with grenades and anti-tank mines. Sometimes mines were brought under tanks from the trenches with the help of long poles. On the night after the battle, the uninhabited enemy tanks, which were near the front edge of the defense, were detonated by our sappers with explosives.

In the winter of 1944, sabotage groups were created, specifically designed to destroy enemy vehicles. There were selected the most powerful and fearless fighters. A group of three or four people underwent special training, after which they were sent to the enemy’s rear for several days to carry out a combat mission.

Armed with machine guns, anti-tank mines and grenades, the saboteurs destroyed enemy tanks in the most unexpected places for the Germans: in parking lots, at gas stations, in repair zones. There is a case when our sappers managed to mine a tank stopped at a German inn, while its crew quenched their thirst with beer. The German tankers did not notice anything, ten minutes later they started the car, but did not have time to start off, as a powerful explosion was heard ...

This form of fighting with tanks was quite effective, but it required close contact. For the destruction of tanks at a distance in addition to grenades in the infantry, anti-tank guns were widely used. But, as already mentioned, anti-tank rifles in the USSR at the beginning of the war turned out to be a hitch.

It turned out that by the year 1941 there were no anti-tank guns in the Red Army. There were only developments, in particular, there existed in the prototype an anti-tank gun 14,5 mm of the Rukavishnikov system. The fact was that Marshal G. I. Kulik, who was at that time the head of the Main Artillery Directorate, was confident that the Germans were armed with tanks equipped with powerful anti-bullet armor. As a result, the marshal managed to convince Stalin not to start producing anti-tank guns, and even to stop producing light guns of 45-76 mm caliber "out of use." From the very first days of the Great Patriotic War, it turned out that German tanks had rather weak armor, but there was simply nothing to break through.

The Rukavishnikov anti-tank rifle in all respects was superior to the samples that existed at that time in the world, but it had one major drawback — it was extremely difficult to manufacture. Stalin demanded such a weapon, which can be produced as soon as possible. As a result, two Soviet gunsmith designers V. A. Degtyarev and S. G. Simonov were assigned the task of urgently developing an easy to manufacture and maintain, but at the same time effective anti-tank gun. After a couple of weeks, samples of anti-tank rifles, developed and manufactured on sleepless nights, began to be tested at the test site, then engineers received an invitation to the Kremlin. Degtyarev recalled: “On a large table, around which the members of the government gathered, next to my gun lay a Simonov anti-tank gun. Gun Simonov turned out to be ten kilograms heavier than mine, and that was his disadvantage, but it also had serious advantages over mine - it was five-shot. Both guns showed good fighting qualities and were adopted. "

Degtyarev's anti-tank gun (PTDD) turned out to be easier to manufacture and immediately went into mass production. The situation at the front left much to be desired, and all made guns were sent near Moscow, to the front line directly from the shops. Somewhat later, the production of a Simonov rifle (PTRS) was widely developed. Both of these models have proven themselves in battles.

The calculation of the anti-tank gun (PTR) included two fighters: the shooter and the loader. Both of them had to have good physical training, since the guns had a length of about two meters, had considerable weight, and it was quite difficult to carry them. Yes, and shoot from them was not easy: guns had a very powerful impact, and a physically weak shooter could easily break his collarbone with his butt.

In addition, after several shots, it was necessary to urgently change the position, quickly taking both the gun and ammunition with them, as the German tankers were very afraid of anti-tank guns, and if they detected combat crew, armed with the AV, then they tried to destroy it with all their might.

With the appearance of enemy tanks on the front, protected by more powerful armor, the value of anti-tank guns declined, but they continued to be used until the end of the war, and were successfully used not only against armored vehicles, but also against aircraft. For example, in 1943, the fighter-armored soldier Denisov 14 and 15 July near Orel shot down two German bomber from the PTR.

Our anti-tank guns from the Germans themselves were highly appreciated. Neither the German nor the Hungarian anti-tank guns, which were in service with Nazi Germany, could not be compared with the works of Degtyarev and Simonov.