With a revolver, but without a kind word

February 7 2014
73
American police have, we can say, unlimited rights. These rights are so broad that they have almost become responsibilities. The cops on the streets of New York or Washington should poke their nose in any business, shoot passers-by who were just on the way, kill “on suspicion,” including people who are unarmed. The judiciary usually covers the executive who has blundered power: the hand washes the hand. American cops feel complete impunity. Of course, these warriors of the streets quickly decompose morally. 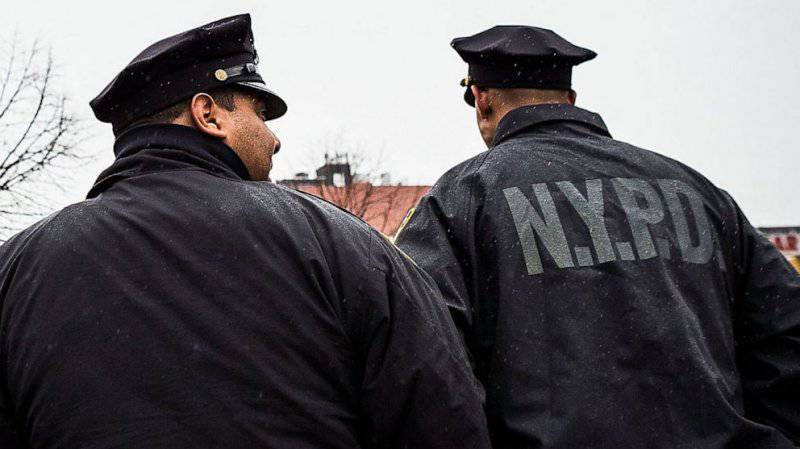 At the beginning of 2014, the media appeared confirmed information about the police scammers who deftly turned over the “business” with social benefits meant for those who suffered from the 9 / 11 attacks. In the New York case, 106 enterprising Misters are now undergoing, of whom 80 has been arrested. Of these eighty, 72 are ex-cops. They are all charged with fraud. The estimated total damage from the activities of these policemen, firefighters and rescuers who have joined them is estimated at 400 million dollars!

All these brave guys are simulators, but not the ones described by Hasek in Schweik. The cops quite successfully pretended to be psychos that they supposedly became after participating in rescue operations at the scene of the tragedy. Each of them, with the assistance of four experienced and qualified intermediaries who trained the police in the necessary simulation, received real certificates of full labor incapacity - with real seals. And since these people have suffered so much, the budget transferred thousands of dollars to them on 30-50 - annually.

For many years, the “psychos” led a turbulent life: they boasted through social networks about how they happily live in retirement, travel, fish and even work in decent positions (although it would be better for some neurological disorders to live in a felt room). One of the loonies was a pilot, and the other taught people martial arts.

I remember a shot from the movie "Deadly weapon":" He pretends to be. He wants to get a pension. ” Mel Gibson's character did not pretend, but the real cops pretended.

And these types in the United States are called law enforcement officers!

As for the moral component, the cops really have it at zero. Not because the capitalist system corrupts a person, but because cops are accustomed to shoot first and then think. And the second paragraph is not required. Thus, the behavior of a policeman is simplified to the ultimate psychological model: he suspected - fired. As a result, the police in America themselves have become a source of threat and danger. Especially when you consider that we are talking about the police, who on the streets are practically unlimited.

14 September 2013 in New York, on Times Square, the “guards of order” saw a strange man, then running out to the roadway, then running away from her. Just in case they started shooting at him. Not hit But seriously injured two women. Having cleared the way for them with bullets, the policemen understood that the Mr. pursued by them was unarmed. Therefore, they did not kill him, but struck him with a stun gun. Subsequently, the doctor explained to them that this person was just mentally unbalanced.

In the same month, valiant policemen in Charlotte, North Carolina, shot an unarmed man who ... asked for help.

Some local resident called the law enforcement officers by phone: an unknown person seemed to be bursting into her house. This "unknown", seeing a police car, immediately rushed from the door, which knocked, to the policemen. Of course, he had no weapons.

Without hesitation, the “guardian of order” pulled out a stun gun. But the machine for some reason did not work. Then the second policeman opened fire with a pistol. What else to do if the shocker does not work? Young Jonathan Fairrell (24 of the year, only began to live) died on the spot.

Not far from the “battlefield,” police found a damaged car that belonged to Mr. Fairrell. It turned out that this man had an accident and knocked on the nearest house to ask for help. Instead of helping her neighbor, the hostess called the police. And since the police in the United States prefer to shoot all suspicious, the bell played a fatal role in the fate of a stranger.

The site fbii.org recently talked about the “roof” that Mayor Michael Bloomberg offered to the New York cops, whose term expired on December 31 of 2013. It was with him that the police received unlimited powers, including permission to use weapons in crowded places, and the use of stop-interrogation-search tactics.

Under Mr Bloomberg, the New York Police Department was involved in several major corruption scandals. For example, the "Ticket-Fixing" case. In the US, motorists who violate traffic rules receive a penalty ticket, and may also lose the right to drive a vehicle for a long time. Dissenters go to court, which almost always supports the prosecution. As a result, you have to pay both a fine and legal fees. But if the policeman who issued the fine ignores the trial, the case is decided in favor of the offender. Having received a bribe, on the appointed day the cops did not appear in court. This is the “Ticket-Fixing” case.

Within its framework, three hundred fraudulent episodes were investigated, involving hundreds of police officers. Financial losses of the city amounted to about 2 million. But the prosecutor's office "became interested" only in the main actors.

“Alas, the punishment of a dozen policemen is nothing compared to the number of those who could be prosecuted by the prosecutor’s office,” a source in law enforcement agencies quoted the New York Daily News.

In August, 2011, according to the same fbii.org, about thirty policemen were under investigation for perjury in a number of criminal cases. These cops invented the circumstances in which the arrests were made and fabricated evidence.

“Some policemen lied about the fact that the suspect got rid of drugs at the time of his arrest. This was done to register the arrest and put a tick in the plan, ”sources in law enforcement agencies said.

"Similar stories have one thing in common. At first, the leadership of the New York police is trying to diminish their significance, and if the matter has received a loud resonance, several bad guys blame it all. This approach, it would seem, is intended to polish the image of the New York Police Department, but it also has insidious flaws. Instead of showing openness to criticism and finding his mission to expose the wrongdoing, he sends the opposite signal: the police in New York are a closed society that protects their own interests. ”

Let's clarify: is the state. The state system does not surrender. And yes, it is a closed society. Between him and the people always looms barricade. Approximately described one of the states of coexistence of the people and the state, Comrade Marx.

Nowadays, American police have become ordinary killers. Ksenia Fokina ("Voice of Russia") cites data that since 2012 in the United States, more than 5 thousands of deaths have been caused by police officers. Among the victims are not only mental unbalanced, but also people who have hoped for the service of 911, and old people who crossed the road in the wrong place.

Kang Wong, 84 of the year, was injured by New York City police: this old man tried to cross the road in the wrong place.

As the journalist notes, most of the police stations in the US 17000 do not disclose information about the use of force by employees, and the federal government is not making efforts to get them.

In this case, the police rights - more than enough. If three men stop on a city street, a police car will immediately drive up to them, and armed cops will ask unpleasant questions about the “meeting”. That is, we add to this, the wrong side of democracy. Obama welcomes riots and rallies in Ukraine or processions in Russia, but he does not want to have them at home.

The willingness of police to kill at first suspicion, and the state - to hush up such killings, will lead to serious consequences, says Irish journalist and columnist for the Euro Weekly News newspaper Michael Walsh. He is confident that the trend towards suppression of civil protests will increase, and the police will play a decisive role in this. Teaching society to the idea that anyone can be shot on suspicion of a policeman is, in fact, a scare tactic, says Comrade Walsh. He develops his thought:

“FEMA camps are well known and are created throughout the country with a specific purpose. Relevant authorities are well armed and must temper civil unrest. Thus, this strategy is very well developed. I think that the United States is now in the position in which the Soviet Union was in 1985: the collapse has matured, and they are preparing for it. All that we can hope for is that America’s collapse will be softer than it was in the Soviet Union. ”

No, comrade Walsh. The collapse of the United States can not be "softer." Unlike the Soviet people, the American people are armed to the teeth - the trunks in the United States are almost as many as there are people. And with illegal weapons, which the gangs have, the number of “firearm” in the hands of citizens is difficult to even imagine. In the confusion of the police, ordinary Americans who are very fond of their Second Amendment will defend their constitutional rights with pistols, shotguns and rifles in their hands. They say Americans are very fond of Russian "Saigi" ... And they do not like it when their weapons are lying in vaults. A spontaneous revolution in the US - it will be something. Yes, Jack London, yes: the time of the Iron Heel is here!