February 5 2014
341
Within a few days, clashes between the parties to the protracted conflict took place at a whole range of border areas between Armenia and Azerbaijan. According to a number of news agencies, not only the border forces of Armenia and Azerbaijan, but also police units were involved in the armed conflict. Accurate data on the dead and wounded is not reported. According to preliminary information, about four dozen people were killed, the majority of whom were soldiers of the Nagorno-Karabakh Defense Army (as these units are called in Armenia and Nagorno-Karabakh), several dozen more people were injured. This is reported by the Turkish edition. "Yeni Safak". According to several Western news agencies, even armored vehicles have been brought to the places of the most acute conflicts.


If the conflict is not settled in the near future, then we can confidently say that through the losses from the one and the other side will go to the hundreds. 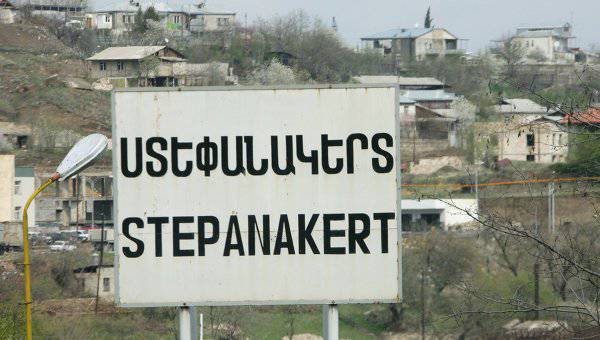 This is the first very large-scale conflict between Yerevan and Baku since the middle of last year. In November, 2013 held a meeting between the leaders of the two countries - Serzh Sargsyan and Ilham Aliyev, which ended, according to the estimates of one and the other, quite positively. But, apparently, at that level, the situation around Nagorno-Karabakh heated up the peaceful potential of a personal meeting of the two presidents dried up in less than three months, and the shots at the border again force us to talk about the fact that the Armenian-Azerbaijani conflict is far from a full-fledged settlement.
The conflict is armed, with firing of automatic weapons and sniper rifles in positions of each other, superimposed on the most real information war, in which the parties are trying to outdo each other. As a result, a very bizarre mix is ​​born that fills the information geopolitical space and tries to break free, let's say, into new open spaces.

To understand that the information war in the region is in full swing, let us cite several quotes from the Azerbaijani and Armenian print and electronic media.

AZE.az (Azerbaijan):
During the day, the Armenians violated the cease-fire in all directions 66 times.

Radio Azatutyun (Armenia):
During the night, the enemy in different parts of the border of small arms, gunners and machine guns about 300 once violated the cease-fire.

APA (Azerbaijan):
Yesterday and this night, Armenian armed units from positions in the village of Mosesgerkh of the Berdsky District of Armenia, fired upon the positions of the Azerbaijani Armed Forces located on the nameless heights of the Tovuz region. Positions of the Azerbaijani army were also fired from positions located near the villages of Ashagi Abdurrahmanli, Garakhanbeyli of the Fizuli region and on the nameless heights of the Goranboy region.

AMI "News-Armenia":
The Azerbaijani Armed Forces made unsuccessful attempts to penetrate the territory of the Nagorno-Karabakh Republic by sabotage groups, but were thrown back to their original positions, suffering losses. In a shootout, the junior sergeant of the NKR Defense Army Armen Hovhannisyan was killed. And on Tuesday, a Karabakh serviceman Karen Galstyan was shot dead by an Azerbaijani sniper. Last week, information was received about the shelling by Azerbaijani soldiers of a number of Armenian villages in the Tavush region, a sixteen-year-old resident of the border village Aygepar was injured.

Who provoked the “new” conflict? To answer this question objectively, apparently, it is not possible for one simple reason: in a territory that has been in a state of permanent hostilities for about two and a half decades (sometimes with truces and handshakes by the leader of the two countries, then with spontaneous military actions by armies in relation to each other), any spark is enough for the situation to literally explode. The Armenian side blames Azerbaijanis exclusively on all the sparking "sparks", the Azerbaijani side exclusively Armenians. Inside this vicious circle, the temperature begins to rise, the accumulating steam is still “set off” in the form of the very frontier skirmishes and a series of mutual pretensions, however, it may well go so far that the Nagorno-Karabakh boiler will simply take off into the air. What will happen to the region? I don’t even want to talk about these scenarios ... Of course, neither the Armenian nor the Azerbaijani side, nor anyone sober, wants to realize these scenarios, however, there are many who want to plunge the Caucasian region into the chaos in this world, and therefore skirmishes in the Transcaucasus is hardly worth treating, let's say, with coolness.

In this regard, it is worth paying attention to the words that were recently expressed by US Secretary of State John Kerry at the Munich Security Conference. Kerry literally stated the following:

You do not hear about this, but we are working to resolve the Nagorno-Karabakh conflict in the Caucasus.

Why not hear? We hear. Apparently, those shots are the work of the US State Department to resolve the Armenian-Azerbaijani conflict? ..

Of course, one can reasonably talk about the “effectiveness” of the settlement of the conflict by American diplomats, but in this situation the peacekeeping efforts on the part of Russia look rather dubious. But without the participation of a major regional player, Russia’s objectively today is to put the parties at the negotiating table and, as they say, to bring them to the conclusion of really working agreements on peaceful partnership, it will definitely not work. It will not work for the simple reason that both Baku and Yerevan will stand firmly on their own. The position of some: our territory is occupied or something like that; the position of others: our territory is annexed or again something like that ... With such approaches, and even without real (precisely real, not blurred in time and not left in the background - for a pile of non-working documents) diplomatic assistance, not only smolder, but eventually turn into the same, ready for the explosion, the cauldron (and, perhaps, is already turning).

But diplomatic assistance from Russia today may come across a peculiar nuance, and, by and large, is already coming. The nuance is that Armenia is a full member of the Collective Security Treaty Organization (CSTO). Azerbaijan, we recall, is not. That is, diplomacy here must be so flexible and correct that its administration with respect to the issues of resolving the Transcaucasian conflict does not lead to even more negative consequences. CSTO here becomes a kind of stumbling block. Azerbaijan blames Armenia for joining the organization precisely in order to “grab” Nagorno-Karabakh; Armenia is trying to refute these accusations of opponents, however, it is clearly not very enthusiastic about the fact that the CSTO in the conflict is silent.

But here it remains only to say thanks to the CSTO for being silent ... Otherwise, the bloody scenario would be provided. After all, the military or even “okolovoennaya” support of one of the parties is a disaster scenario. Does the CSTO suit this position with official Yerevan? Well, here it is: if in Yerevan they don’t want a lot of blood, then they will have to put up with the position. If they don’t want a lot of blood in Baku, then they should react with more restraint, because the problem cannot be solved solely on accusations of occupation and other “charms”.