February 10 2014
31
February 1 Magazine "Frontpage Mag" Daniel Greenfield's article was published on the topic of some misunderstandings between Russia and Turkey. The author reports that the support of Hamas by Erdogan, Mursi and the al-Qaeda militants in Syria did not seem to upset the administration of B. H. Obama, but made the Russians worry. And the Kremlin has cause for concern: after all, the Chechen community in Turkey supports separatists and Islamic terrorists in the Russian Caucasus. 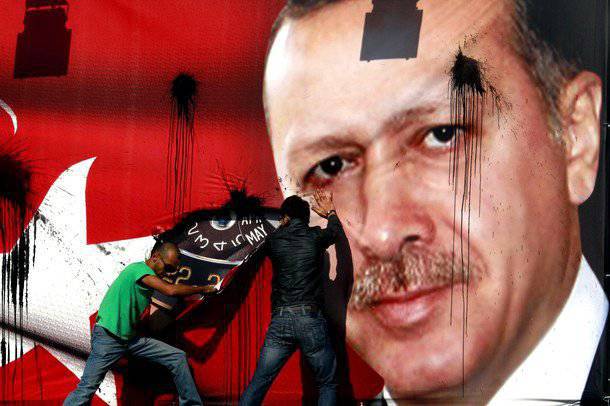 The tensions between Moscow and Ankara, and at the same time Erdogan’s crisis of power, originated back in 2011, the journalist believes. The conflict of interests is also related to the "money laundering", namely, the income from the trade in Afghan opium and illegal operations with gold carried out by Russian Chechens together with their Turkish "colleagues". The threads led to the sons of the Turkish Minister and 34 to other suspects who were arrested on December 17 of the year 2013. In Turkey, protests began against the Erdogan government.

The journalist notes that the scandal, in fact, turned around between the corners of the Turkey-Syria-Iran triangle: Erdogan’s winding policy is such that he cooperates with Iran bypassing Western sanctions, but opposes Iran supporting Bashar Al-Assad in Syria. Such a policy was in doubt when in Russia and Iran they learned something about Ankara’s dirty work, the journalist writes.

A certain Zerrab, arrested last week during a police investigation, allegedly distributed 137.000.000 Turkish liras (66 million dollars) in bribes to three ministers and their sons. The bribe takers were supposed to cover up false export transactions and money laundering (these transactions were reportedly largely related to Iran). Someone Ş.D. complained about the activities of Mr. Zerrab where to follow.

The Russian Federal Customs Service became interested in a suitcase with cash in December 2011: millions of dollars belonged to a private person who was returning to Russia from Turkey. The investigation revealed that there is money laundering involving Russian and Turkish citizens.

14 December 2011. Russian law enforcement officers found a total of 18,5 million in a suitcase at Vnukovo Airport. Four suspects detained in Russia were involved in money laundering and transportation. In total, they made 37 trips. In total, these individuals transported between Russia and Turkey 40 million and 10 million euros.

According to the journalist, Russian officials would have let everything off, especially since we are talking about large-scale transactions. In such cases, anyone who launders that much money has already paid the appropriate bribes. This would be as true in Turkey as in Russia, the author believes.

However, after Erdogan’s attack on Syria, the Russians may have decided that the game of alienating Turkey from NATO should not be played anymore.

As for Iran, we’ll add on our own, today, when sanctions are lifted from it, Ankara shows a growing interest in negotiations with Tehran - at the same time not forgetting its regional influence: Erdogan does not agree to the second roles.

Recently R.T. Erdogan visited Iran on a top-level visit. The main problem of effective and fruitful cooperation between Iran and Turkey is the Syrian issue. The second significant problem is Turkey’s membership in NATO (some NATO-based Patriots in Turkey are worth something) and in general Turkey’s membership in the EU. For Iran, the NATO countries are an almost unequivocal enemy. Nevertheless, Ankara wants to buy Iranian oil (and previously bought it despite Western sanctions, which was not approved in Washington) and Iranian gas and in general become almost a full-fledged economic partner of Tehran. Turkey’s policy is indeed “tortuous”.

And the next "gyrus" - a recent strike by Turkey on the positions of Islamist militants in Syria.

On January 29, Turkish troops crossed the Syrian border yesterday and fired on positions of the Islamic State of Iraq and Sham (ISIS) group. Turkish infantry supported by tanks and artillery attacked jihadists after they opened fire on Turkish border guards. This was written by Sergey Manukov ("Expert Online"), referring to the Turkish media, having sources in the Ministry of Defense of Turkey, and the British newspaper «Times».

Took part in the attack and aviation, that is, we can talk about conducting a major combined-arms operation.

An ISIS member named Abu Light via Twitter announced that jihadists, under the orders of their leader Abu Bakr al-Baghdadi, will not conduct retaliation operations in Turkey. Probably, ISIS does not want to once again annoy Ankara and hopes that it was a single operation, and not the beginning of the war of Turkey against the radical opposition.

Ankara’s attitude towards the radical opposition, and especially towards ISIS, notes Sergey Manukov, has begun to change since the end of last year. Two weeks ago, Foreign Minister Ahmet Davitoglu accused ISIS of secretly flirting with Damascus. 20 January The Turkish authorities have warned that ISIS is planning a series of terrorist attacks in Turkey, the targets of which should be activists of the moderate Syrian opposition. Erdogan could not like either the terrorist attacks on the territory of Turkey or the “secret flirting with Damascus”. So the military operation using aviation is quite understandable.

But besides this, tanks and airplanes, we note, is a good move that can be used in improving relations with Iran.

A “tortuous” attitude to the Syrian conflict recently outlined Ahmet Davutoglu. He said that the Assad regime can be called a "lesser evil" compared with the methods of the actions of radical groups in Syria. According to him, the radicals must leave the country.

Accordingly, a powerful blow to the ISIS is a transition from words to action.

Turkish rulers finally realized that al-Qaida is waging war against all who are not for al-Qaida, and that further support of all those who are fighting against Assad is fraught with not just problems, but big problems. The goal of national security came to the fore, pushing all others. After all, where there is no national security, projects on regional leadership are dying. And Turkey has such projects.

Senior Researcher, Institute of Slavic Studies, Russian Academy of Sciences, Ph.D. historical Sci. Pyotr Iskenderov in an article on the resource "Fund of Strategic Culture" notes that Turkey, based on the doctrine of neo-Ottomanism, seeks to play a more significant role in Eurasia, which implies the development of Ankara’s relations not only with the Balkan and Middle Eastern countries, but also with the Central Asian states. As US Assistant Secretary of State Robert Blake once remarked, “Central Asia lies at a critical strategic crossroad connecting Afghanistan, China, Russia and Iran ...”

Here you have a "winding" policy, add from yourself.

Ahmet Davutoglu, the columnist notes, insists that Turkey should become the “central country” of the new Eurasian order. The West does not like this geopolitical activity of Turkey. “Freedom House” describes what is happening in Turkey as a soft version of the “surge of new authoritarianism,” and “The American Interest” generally claims that Erdogan “is trying to establish the regime of the sultanate in the country, with the support of a conservative majority.”

Peter Iskenderov believes that in the near future, Turkey’s presence in the central European markets may be strengthened, including through cooperation with the Shanghai Cooperation Organization. Despite the opposing views on the Syrian issue, Turkey in 2012, with the support of Russia, received the status of a "partner in dialogue" of the SCO.

At the same time speaking against Assad, Erdogan moves closer to Russia and China and is nervous about the EU, NATO and the United States. Your allies! Very much "winding" ...

In addition, Turkey strengthens and expands economic cooperation with Kazakhstan (Turkish investments in the economy of this republic amount to 2 billion dollars, and if in 2005, Turkey accounted for 1,2% of Kazakhstan's foreign trade, then in subsequent years the volumes grew by more than 10 % in year).

Next - Kyrgyzstan. At least one third of the goods entering Kyrgyzstan through imports are of Turkish origin.

The Tajik direction is less developed, the expert notes.

According to P. Iskenderov, today it is quite possible to predict the further strengthening of Turkey’s positions in the Central Asian region. The deadlock in Ankara and Brussels relations also contributes to this.

To this we must add that, despite the friction between Russia and Turkey due to the Syrian conflict, Ankara is doing everything so that the economy does not suffer from politics.

After all, today Gazprom is the largest supplier of gas to Turkey (16% of European Russian gas exports go to this country). Deliveries of natural gas from Russia today cover 56% of Turkey’s needs. In November 2013, Recep Tayyip Erdogan held talks with Vladimir Putin, after which he said that by 2020, Russia and Turkey intend to bring bilateral trade to 100 billion. Putin, in turn, said that the share of Russian gas in the fuel balance Turkey is 60% and that in the 2014, the construction of another South Stream energy route through Turkey’s exclusive economic zone will begin. Putin also recalled that Rosatom is building the Akkuyu nuclear power plant.

By the way, in his speech, Erdogan touched the international situation in the world. Iraq flashed, Syria flashed, and Erdogan said that there are "common steps that we must take ..."

Well, obviously, Erdogan and Davutoglu have already begun to “take” steps. These two are experienced managers, and they understand that economics is primary, not politics. And the scenarios of "neo-Ottomanism" or "Pan-Turkism" are good where the economy is good. And nothing else. But the impending failure of the opposition in Syria, I suppose, Erdogan will suffer hard.

Observed and commented on Oleg Chuvakin
- especially for topwar.ru
Ctrl Enter
Noticed oshЫbku Highlight text and press. Ctrl + Enter
We are
The attack on the Russian aircraft and the political situation in TurkeyWhy overthrown Mursi, or the collapse of a failed jihadist
Military Reviewin Yandex News
Military Reviewin Google News
31 comment
Information
Dear reader, to leave comments on the publication, you must sign in.