Pistols and revolvers to the people

February 5 2014
306
Self defense with weapons in the hands - the right of a citizen, not the average


The right to personal weapons remains one of the burning problems of Russian society. Interest in it periodically increases with high-profile crimes, then subsides, but, unlike ordinary citizens, who are only concerned with everyday affairs, the Right to Arms social movement consistently and steadily leads this topic. Representatives of almost all political forces of the country - deputies of various levels: from United Russia, the Communist Party of the Russian Federation and the Liberal Democratic Party, nationalists and liberals, former minister in the government of Gaidar Andrei Nechayev and the famous communist Alexander Prokhanov participated in the 2 congress of the movement last fall. It is curious that even the leader of the CP, Sergey Mironov, recently a tough opponent of our organization, sent a greeting to the delegates to the congress.

Delegates to the congress gave many arguments in favor of the need for citizens to have a weapon of self-defense, spoke about the irrationality of the ban on it in Russia, were outraged by the norms of current legislation. After all, the ban on armed self-defense makes a citizen a man in the street and an eternal victim, insults human dignity.

The most common argument of our opponents is this: the inhabitants of the country are largely uncultured, prone to drunkenness, rudeness, incontinence, and it’s dangerous to trust them. The fact that these humiliating characteristics are repeated by ordinary people who seemed to have a vested interest in personal safety and the protection of their rights, in my opinion, is a serious fault of the current government. In my deep conviction, this is not a “rational”, “reasonable”, “sober” and other view of the Russians, it is a manifestation of deep disrespect not only for compatriots, but primarily for themselves. And the power of this marmelade self-deprecation in every way cultivates through its media. 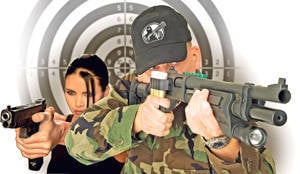 In the 60 of the last century, a wave of youth street criminality swept through the Soviet Union. The militia was then armed with batons, all workers were obliged to be on duty in the people's guards, but nothing helped. In the evening, the city streets turned into a jungle, teeming with brazen impudent punks. Here is what Alexander Solzhenitsyn wrote under the impression of the situation at that time: “There is the most absurd article of 1926 in the Criminal Code (Criminal Code of the Year 139)“ On the Limit of Necessary Defense ”, and you have the right to bare the knife not before the criminal has brought a knife over you, and stab him no sooner than he spews you. Otherwise they will judge you! And the articles about the fact that the biggest criminal is an attacker on the weak, are not in our legislation! .. This fear of surpassing the measure of necessary defense leads to complete relaxation of the national character.

Red Army soldier Alexander Zakharov began to beat a hooligan near the club. Zakharov took out a folding penknife and killed the hooligan. Received ten years for it as for pure murder. “What should I have done?” He wondered. Prosecutor Artsishevsky answered him: “I should have escaped!”. So who grows up bullies?

The state under the Criminal Code prohibits citizens to have firearms or edged weapons, but does not take over their defense! The state surrenders its citizens to the power of bandits and through the press dares to call for “public resistance” to these bandits! Resistance to what? ”(“ The Gulag Archipelago ”, that is, 2).

Half a century has passed since then, generations of politicians and citizens have changed, totalitarianism has been branded and exposed, but the law on personal self-defense in the spirit of 1926 has been preserved so carefully and efficiently, as if the basis of its slightest change in Russia is capable of collapsing the foundations of the state. At all times in all countries warriors are considered the foundation of the people and the state. These are not always people in uniform and with weapons, but always those who protect, help, are incapable of meanness, are ready to give their lives in the name of duty. That is, people of honor, salt of the earth. And in today's Russia, these are the people most defenseless. They do not have the means to protect and help, and the honor does not allow to stand aside or save their own skin when armed bastards create lawlessness. So we see constantly how helpless and useless the best die. When the psychopath Vinogradov shot at people, one of them rushed at him with his bare hands and was immediately killed. Would have had a weapon - he would have survived himself, would have neutralized the scum and would have saved others.

For the sake of justice, let me remind you of a well-known case in the USA, where a similar psychopath shot schoolchildren. The director rushed at him without weapons and died - this school was an area where weapons were forbidden even to guards. But in America there are not too many gun free zones, and Russia is so complete. The stubborn ban on weapons and the protection of human dignity makes popular the conspiracy thesis that the country's leadership, reliably protected by the Federal Guard Service, uses criminals and punks as a tool to control people. The frightened people - the eternal “tolerant” - are in dire need of law enforcement agencies, ready to go for any violations of their freedoms and rights in the hope of personal security.

For me, such a conspiracy theory looks too simple and crude, if only because there are already quite a few influential figures in power who openly advocate for the return of the rights to a normal civilian short term and a corresponding change in the Law on Self-Defense. Things are much thinner. The question of the right to weapons is one of the visible tips of the iceberg, which can be called the philosophy of the relationship of power with the people. The system has been established for a long time and is very durable; it is painful to change it, but it is necessary. For periods of national storieswhen the state ruled literally all aspects of life, the majority got used to paternalism, having lost important skills of personal responsibility and ability to make decisions. The time of lack of freedom violated the natural proportions between real citizens - internally free, self-reliant and willing to take risks, and the philistines - those who are inclined to mindless submission in exchange for wealth and protection. Citizens died or were driven out on the sidelines of life, and the townsfolk multiplied under the strict supervision of the state. The negative selection system went bankrupt and disappeared, and its imbalances remained. In this regard, I recall the statement of the great Niccolò Machiavelli: "Disarming the people, the government thus offends them with distrust, and this speaks of the cowardice and suspiciousness of the government."

The inhabitants feel the spinal cord that in equal conditions always give in to the citizens, but this is not desirable. Ready to recognize the superiority of the authorities, but not the neighbor. So they bother to reduce their opportunities so that they do not stand out and grow in life. After all, if legalized pistols, to give the opportunity to defend and defend without the risk of prosecution, then the strong in spirit will be able to stand on equal terms to criminals and jugglers, to quickly occupy the best places in the social hierarchy, will receive legal recognition in society.

This is a positive selection, an alternative to it is the degradation of the nation, where "silence is blissful in the world." The desire to strangle on the vine the potential success of strong and decisive remains one of the most vile methods of the psychology of degeneration. When you say to such people that with legal pistols you can again, at the moment of danger, shout “Guard!” With the expectation of effective help from others, they declare that the police should be forced to improve their work. And it is useless to say that in Russia there is actually the largest percentage of police in the world among the population, but there’s no point in it.

The top leadership of our country makes various efforts to get Russia on the path of innovative development. Many such projects have already been announced and financed, among them Skolkovo, designed to attract the best scientific and engineering personnel in the country and the world. A lot of money has been invested, built, residents have been attracted, embezzlements have been revealed, corruption scandals have gone, and recoil has gone unnoticed. But the best cadres mostly seek the United States, Switzerland, Canada, Germany, France, Israel, the Scandinavian countries, and Skolkovo does not, although the material conditions are offered no worse than abroad. Hence, there is no single reason for bread. All these countries have a high scientific and technical reputation and the most liberal legislation on weapons and self-defense.

The government of Russia is against civilian short-haul allegedly together with the majority of the people, but it’s precisely in this part of the inhabitants that the slavish desire to obey dominates for being fed and protected. A slave from the owner is waiting for handouts, he takes time off from work, steals that he is lying badly, he has no sense of duty, no shame, no gratitude. Who trusts so, behind them the eye and the eye, every trusted penny has to be controlled repeatedly. This population of any serious responsibility and does not need to be trusted with money for creative economic self-realization and a weapon for personal self-defense. Such people go to the polls not to choose the first among equals, and in order to put the breadwinner over him and the country, who will always be scolded, they will never help him, and if he fails and feeds poorly, he is ready to overthrow him joyfully and cruelly.

Our entire state apparatus is sharpened to control such a contingent, applying the methods developed for it to the whole people. And the people are changing, the creative class with civil consciousness is growing rapidly. The methods and philosophy of the current state administration can only insult citizens so far, cause complete disbelief and unwillingness to cooperate in all innovative initiatives. Because there is a feeling, as in the subtext of all relations of power and society, there is a suspicion that every person is a possible swindler, a traitor or a klutz. Without respect of the state for the true freedom of the individual, no breakthroughs will succeed.

Ctrl Enter
Noticed oshЫbku Highlight text and press. Ctrl + Enter
We are
"Who are you," Shooter "?"A.A. Prokhanov on Echo about Berezovsky, Navalny, the hero of labor, about Bashar Assad, about Syria, Libya, Korea
Military Reviewin Yandex News
Military Reviewin Google News
306 comments
Information
Dear reader, to leave comments on the publication, you must sign in.