February 4 2014
86
In the framework of the Munich Conference, the Ukrainian opposition and the United States actually agreed on a plan to force Viktor Yanukovich to surrender. This action plan was developed with the direct participation of Western representatives after a meeting with US Secretary of State John Kerry and EU officials Arseniy Yatsenyuk. While "euromaidan" strengthens the tents, showing that he has stood for a long time, the State Department outlined the time for the completion of the regime change operation in Ukraine - March 24. This is the way to interpret the message that appeared on the official website of the US State Department 24 in January: 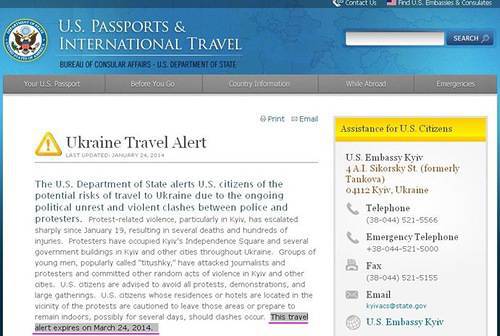 “Warning of the danger of traveling to Ukraine. The State Department is warning US citizens about the potential risks of traveling to Ukraine due to ongoing political unrest and violent clashes between police and demonstrators. The protest related to violence, in particular, in Kiev, sharply escalated since January 19, as a result of which several people were killed and hundreds were injured. Protesters occupied Independence Square and several government buildings in Kiev and other cities. Groups of young people, referred to in everyday life as “titushki,” attacked journalists and protesters. US citizens are advised to avoid all demonstrations of protest and large crowds of people. For US citizens whose homes or hotels are located near crowds of protesters, it is advisable to leave these places or be prepared not to leave the premises, perhaps for several days in case of collisions. This warning expires on 24 March 2014 of the year. ”

The start of the implementation of the regime change plan is likely to coincide with February 7. This is the date on which there are two significant events - the beginning of the Olympics in Sochi and the end of the next time limit for raising the US government debt limit agreed by the president and Congress.

Today, just like six months ago, when the situation in Syria dramatically worsened, everyone was waiting for the military campaign against this country, the owners of the Fed and the US government once again face the same suicidal dilemma: if they recognize the default, declare America bankrupt or Once the ceiling of the national debt, to further tighten the budget saving regime. On the international stage, this dilemma is directly related to the need to revise the status and role of the US currency.

To solve the problem, aggravating the life of America, the owners of the dollar is not able to. In recent years, they have only delayed the decision, being satisfied with the initiation of disasters that distract attention from the dramatic position of the American currency. Now a new problem escalation is delayed until February, after last fall something similar happened against the backdrop of dramatic events that attracted the attention of the whole world to Syria (the drama was provoked by the allies of the Islamist Americans, who falsified the "chemical attack" in August 2013). A similar shift in world media attention is taking place today, only now the main “distraction factor is played by riots and pogroms on the streets of Kiev and other cities of Ukraine. 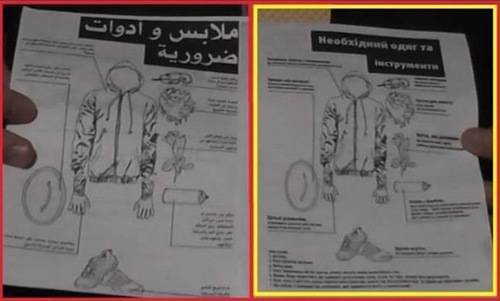 Compare the two pictures, they are identical. The figure in the red box shows the instruction in Arabic, developed by American experts at the first stage of “popular protest” in Syria (2011 year). In the yellow frame - instructions for activists of the Kiev Maidan in the Ukrainian language.

For the first time, the problem of default by the United States sharply actualized in the 2008 year, soon after Moscow declared that Russia was headed for the economic integration of the countries of Eurasia. Then the Americans managed to divert the world's attention, switching it to the slaughter in South Ossetia, unleashed by their Georgian puppets on the day of the opening of the Olympics in Beijing, and what the world media called "the beginning of the global economic crisis."

The global “global superpower” default, the collapse of the current monetary system and the dollar, most likely will not come immediately after February 7 - despite the most acute financial and economic crisis since the Great Depression and the astronomical amount of the total debt of the United States. The masters of the American currency initiated a number of crises that could give the dollar another respite.

The most "promising" crisis has been created around Ukraine, to the shores of which the United States, under the pretext of the Olympics in Sochi, is already ready to send its warships. Thanks to the hype around the unrest in Ukraine, the key facts in the world media remain almost unnoticed, indicating the severity of the problems faced by the Americans. Like information about the size of the fall in real income (real disposable income, RDI) of the US population since 1974 of the year (the dynamics is reflected in the attached chart): 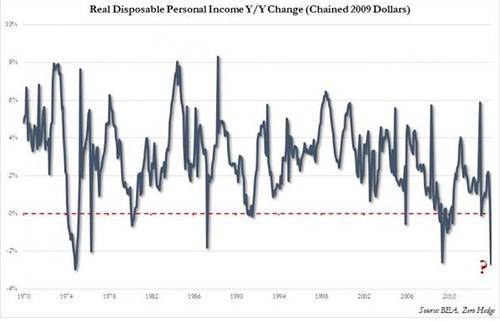 What is happening is hitting Europe. Even Polish politicians with a pro-American orientation like former Polish President A. Kwasniewski, who represents the European Parliament in Ukraine in the case of Tymoshenko, speak with alarm about this. “The situation in Ukraine,” says A. Kwasniewski, “can completely get out of the control of the authorities and the opposition and have extremely tragic consequences not only for Ukrainians, but also for the European Union ... Because innocent people are dying in Ukraine , a wave of migration and economic problems are possible ... We are actually facing a big tragedy. I think that European diplomats, diplomats from neighboring countries and Poland should be very sensitive to these matters. We may find ourselves in such a spiral of events, which can no longer be stopped ... "

In addition to the crisis in Ukraine, distracting the world community from the approaching struggle for the future of the dollar on Capitol Hill, three more crises, “doublers” - unleash in Thailand, Egypt and Syria. On the eve of the Olympics, Damascus should report on the elimination of chemical weapons. Adopted in November, the plan provides for its final export by February 5. However, Syria clearly does not have time to meet the deadline. But both the fulfillment (disarmament before a potential aggressor) and the non-fulfillment by Damascus of chemical weapons commitments gives Washington an excuse to step up actions against Syria - Russia's last Middle East frontier. No wonder the United States at the Munich Conference tried again to speak with Syria the language of ultimatums, and the radical Islamists from the "Emirate of the Caucasus", fighting on the side of the Syrian militants, are ready to act in Ukraine, after they called upon their like-minded people to "go to jihad" and Syria, and in the North Caucasus.