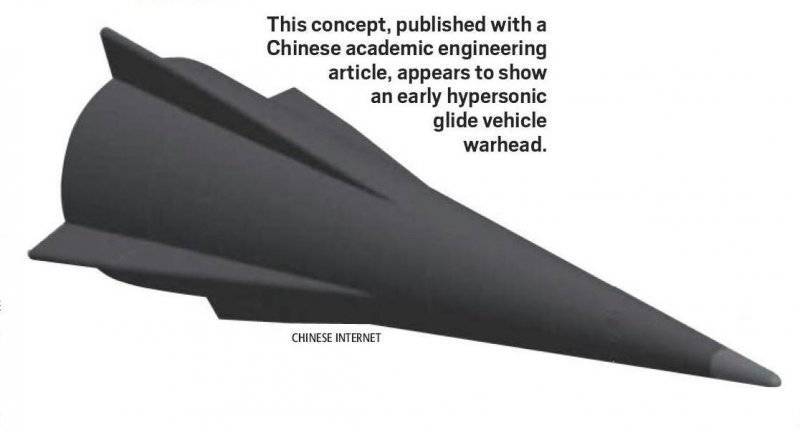 "Military Parity" from 01.02.2014 reports: In the US magazine “Aviation Technology and Space Weekly” from 27 January (corrected by VO editors, Aviation Week & Space Technology - January, 27, 2014) An article titled "The US Navy views the Chinese hypersonic apparatus as a major military threat from China" has been published. Tiananmen's Tremendous Achievements with reference to huanqiu.com.

The US Navy believes that the 9 held January by China hypersonic test with speed 10M reflect China's preparation for a future war. After China masters this technology, it will have weapon, which will overcome all existing missile defense systems and increase the range of its ballistic missiles. It will take several years to work out the complex issues of control systems and to set up the release of weapons of high-precision strike.

The article says that testing of this hypersonic device eloquently confirms the fact of China's further work on the creation of anti-ship ballistic missiles. And, probably, indicate the imminent appearance of the next generation of Chinese anti-ship missiles. According to US military expert on China Richard Fisher, this is a DF-26 rocket, which may be equipped with a hypersonic warhead and will have a range increased to 3000 km, rather than a DF-21 with a range of 2000 km. If China equips the DF-31 MBR with the same warhead, then its range may increase from 8000 to 12000 km.

The article states that the United States must deploy work in the field of creating weapons based on new physical principles, such as directed energy flow, to counter such missiles, since the existing anti-missile defense systems cannot intercept missiles at speeds above 5M.

The article in “Aviation Technology and Space Weekly” by the authors Bradley Perrett, Bill Sweetman and Michael Fabey is more extensive and tells about significant and serious things. 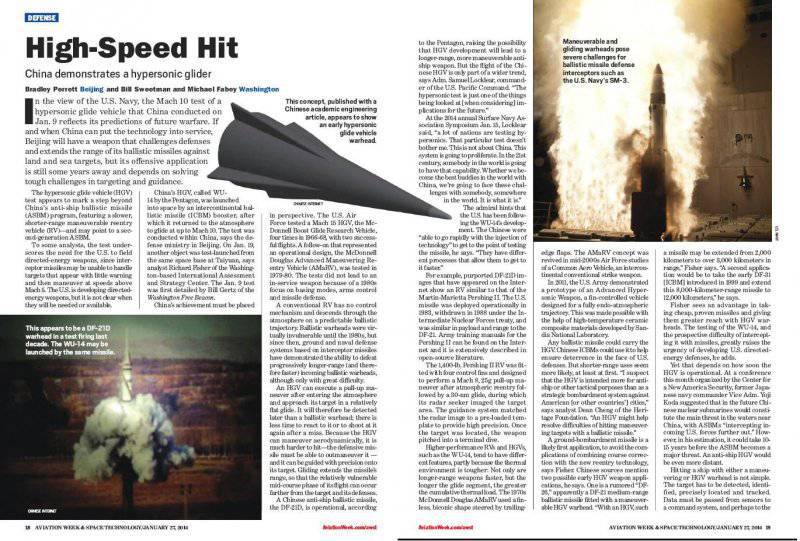 For example, in the article it is believed that the DF-21 ballistic anti-ship missile (BKPR), possibly close to adoption, is less dangerous than a DF-26 with hypersonic BB. The authors believe that the BFCR DF-21, created on the basis of the RSD, flies along a ballistic trajectory at a speed of less than 5 thousands of meters per second and for intercepting it on the AUG there are means such as anti-missiles SM-3.

We are in our discussions on the page "Military Review" have repeatedly pointed out that the trajectory of the flight of such missiles is quasi-ballistic, since the head part on the highway is actively maneuvering, looking for a target and aiming at it. Therefore, in order to intercept such targets, it is necessary to have time to detect them in a very limited time reserve, to track the changing parameters of a nonballistic trajectory with high accuracy, to accurately calculate the start time and the interceptor missile intercept route. At the same time, the energy resources and reserves of the interceptor maneuver may not be enough to test the "calculation errors" and the resulting values ​​of the "slip" values.

In addition, the use of a set of means to overcome (PCB) in the form of "false targets" and EW repeatedly and significantly complicate the task of interception, making it almost impossible ... 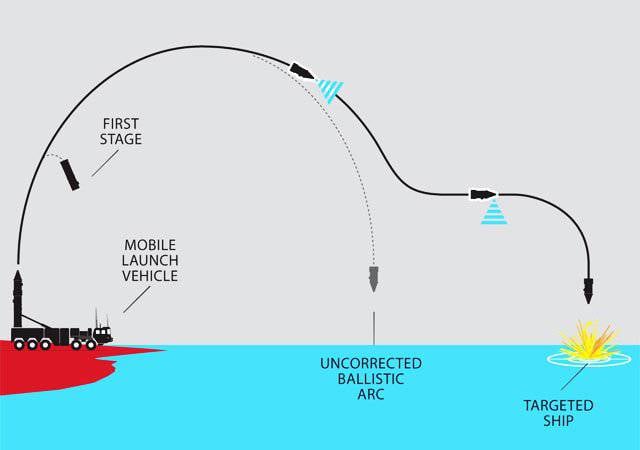 The article focuses on the complexity of interception due to the late detection of a hypersonic attack device such as DF-26. It is concluded that the interception of such aircraft, having a speed in the detection of 5 and more mach, is currently impossible due to the lack of weapon systems. Although the hypersonic device itself (the head of the DF-26 rocket) does not stand out in any particular way: the warhead maneuvering in the high atmosphere layers. Probably outputted to the target by the so-called quasi-styled high-energy-intensive trajectory. From here and later, the detection by radar means: the usual head of the RSD at launch can gain altitude in 500 or more kilometers, quasi-styling - near 200.

It is necessary in this connection to recall that all the new and currently developed Russian long-range missiles - the Bulava-30, Topol-M, Yars-24, Rubezh, Sarmat and even operational - Iskander ", - have a multidisciplinary trajectory for the elimination of head parts, including quasi-styling.

Much of the material in the journal echoes the information previously provided in the "VO" article by Oleg Kaptsov.Chinese penalty. Anti-ship ballistic missile "Dongfeng-21D" "In particular, about the possible use of the UBB (guided combat unit) ideas embodied in the Pershing 21 RSD in the design of the BFSR DF-2. Discusses and problems that need to be solved on the way to the creation of BCRC:
- questions of target designation, its accuracy, speed of reaction;
- the need for special structural materials when creating hypersonic devices ...

There are a lot of skepticism. Nevertheless, a conclusion can be made: competent specialists and officials in the United States closely follow the theme of creating long-range BCRCs, seeing in them a fatal danger to AUG in the near future.

The article also hints at the possible cooperation of Chinese and Russian specialists in solving the problems of creating ballistic anti-ship long-range anti-ship missiles and space-based means of detection and pre-targeting, including due to the similarity of the programs for creating components of these means.