"Berkut" allowed to use force, special means and firearms against citizens 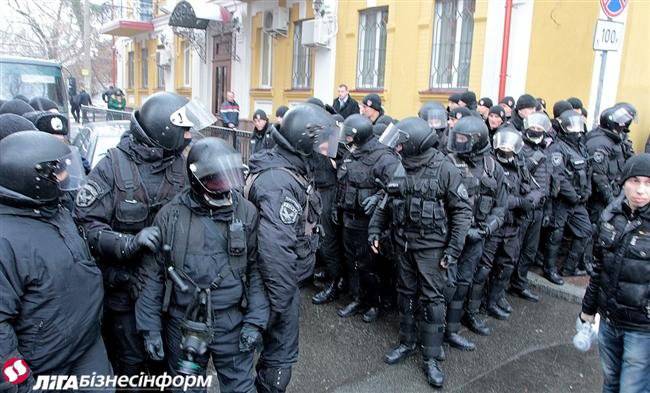 28 January 2014 of the year, the order of the Ministry of Internal Affairs of 24 of October 2013 of the year No. 1011 “On approval of the Regulations on the special unit of the public security militia Berkut, signed by the Minister of the Interior Vitaly Zakharchenko, came into force.

In accordance with the document, employees of the unit in order to perform the tasks assigned to them have the right to apply physical measures, including hand-to-hand fighting, special means and firearms. weapon in the cases and in the manner determined by the Articles 12 - 15-1 of the Law "On Police".

It should be noted that according to the law, police officers have the right to use handcuffs, rubber truncheons, binding devices, tear agents, light-sounding devices of distracting action, devices for opening rooms and forcibly stopping vehicles, water cannons, armored vehicles and other special vehicles. dogs in particular.

As noted in the order, the tasks of the division are: "ensuring public order at facilities and territories that have special national economic importance; ensuring the personal safety of citizens, protecting their rights and freedoms, legitimate interests; preventing offenses and terminating them; protecting and ensuring public order; detection of criminal offenses; participation in carrying out activities aimed at the search and detention of persons suspected of committing criminal offenses, armed and other crimes tupnikov, which is a public danger, hostage rescue, suppression of terrorist acts. "

In accordance with paragraph 27 part 1 Art. 10 of the law on the militia "Berkut" is obliged to ensure public order during public events of a commercial nature "at the expense of the organizations or persons who conduct them."

In pursuance of paragraph 20 of part 1 Art. 11 of the Law "Berkut", in accordance with its competence, provides for a temporary restriction or prohibition of access of citizens to certain parts of the territory or objects in order to ensure public order, public safety, protect the life and health of people.

It is also the duty of the unit to ensure the protection of public order in the places of temporary stay of officials in respect of whom state protection is carried out, and in the territory adjacent to them.

The unit participates with the services, ATS units, internal troops of the Ministry of Internal Affairs, central executive authorities in carrying out activities aimed at the search and detention of persons suspected of committing criminal offenses, armed and other criminals who constitute a public danger, the release of hostages, the suppression of terrorist acts .

The order also states that, by decision of the Minister of the Interior or his deputies, the unit is temporarily relocated to another administrative-territorial unit to participate in urgent measures to ensure public order, suppress group violations of public order and riots, to hold events aimed at search and detention of persons suspected of committing criminal offenses, armed and other criminals who constitute a public danger, holding hostages, suppressing terrorist acts.

We will note that earlier lawyers insisted on the illegality of the operation of the "Berkut", since the division is a militarized formation that does not have proper registration of the legal basis for its existence.

At the same time, as lawyer Igor Tcherezov explained earlier, the "Golden Eagle" functions on the basis of the order of the Ministry of Interior from 28 July 1994 of the year No. 404, which approved the Charter of the patrol and inspection service of the police of Ukraine.

Paragraph 11 of the statute provides that “to stop antisocial manifestations, riots, use measures to combat organized crime, search for and detain highly dangerous and armed criminals, ensure the protection of public order during mass events, large industrial accidents, disasters, natural disasters and other extraordinary circumstances, special divisions "Berkut" are being created.

Recall, MP Anatoly Gritsenko appealed to the District Administrative Court of the city of Kiev with the requirement to recognize the order of the Ministry of Internal Affairs No. 1011 as illegal and invalid. In addition, the Verkhovna Rada registered bills providing for the elimination of special police units (№ 3720, № 3733).