Achilles heel of aviation. How to create a modern flight safety system 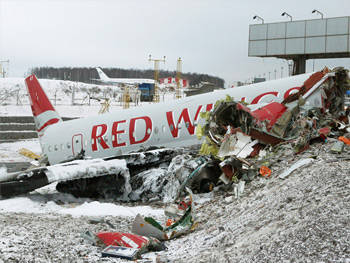 One of the most acute problems aviation from its inception to today, there has been and, unfortunately, remains the problem of ensuring flight safety. This problem is common to all types of aviation: civil, state (military and special), experimental. For each of these types of aviation, the need to solve the problem of ensuring flight safety is actualized by various factors. In civilian cases - first of all, the deaths of several tens or even hundreds of people in one accident; in the state - the loss of expensive equipment and no less expensive (in terms of training) flight personnel; in experimental aviation - sometimes with the closure of promising projects and always with the loss of unique models of equipment and no less unique test pilots.


This problem has not reduced its severity even today, with the current level of knowledge and technology, since it does not have a final solution. This is due to the fact that it is impossible to create an absolutely reliable aircraft (then it should not fly) and there is no unmistakable person, and aviation is composed mainly of these two components - aircraft, that is, aircraft, and the people who serve them. and exploit. Therefore, the flight on any aircraft is always associated with the risk of an accident, with the threat of loss of the aircraft and the death of people on board.

It is this circumstance - the constant existence of a threat to the life of the crew and passengers of the aircraft, as well as the safety of the aircraft itself and creates primarily the problem of ensuring flight safety.

The second component of the problem is the search for the necessary measures to reduce the threat (risk) of an accident to an “acceptable level”, as interpreted by the documents of ICAO - the International Civil Aviation Organization. Solving a problem is reduced to identifying possible risk factors and taking measures to eliminate, localize or significantly reduce the influence of such factors on the aviation system.

The current system of ensuring the safety of flights in the State Aviation was created in the 60-s of the last century. During its existence, it has undergone a number of significant changes aimed at improving its effectiveness and efficiency. These steps have allowed in recent years to achieve a reduction in the level of accidents with state aircraft and bring safety indicators in aviation to the world level closer. However, in general, the effectiveness of the existing system of ensuring the safety of flights in the state aviation remains unacceptably low. In terms of rates of decline in accident rates, we are significantly behind the developed aviation powers. Currently, the accident rate (representing the number of accidents per 100 thousand hours of flight time) in aviation of the advanced countries of the world is about one. Over the past 50 years, it has dropped more than five times. In fact, the value of this indicator decreased by one for each decade.

In domestic aviation (civil and state), the value of this indicator (on 100 thousand hours of flight time) for the same period decreased slightly more than twice. The best achievement in the state aviation will be the indicators of this year, when the value of the accident rate does not exceed two units. Every year we continue to lose expensive aviation equipment, and sometimes flight personnel. This situation can not be tolerated.

The lack of effectiveness of the existing flight safety system is due to many factors: this is the low level of material and technical equipment, the imperfection of the regulatory framework, the lack of constant scientific support, and the limited functions of the flight safety authorities, and often the lack of competence of aviation personnel, including the management team. composition. The main drawback of the State Aviation Aviation Safety System is its fundamental inability to switch to modern, active methods of managing risk factors.

FROM PREVENTION TO PROTECTION

The existing system is built and operates according to the principle of prevention of hazardous factors (risk factors), revealed mainly as a result of investigating accidents or incidents, that is, according to the principle of parrying what has already taken place in practice. Parry is carried out simultaneously everywhere, which leads to the expenditure of all available forces and means without a noticeable effect. This is because the intuition of the aircraft commander remains the main predictive tool for identifying hazards. 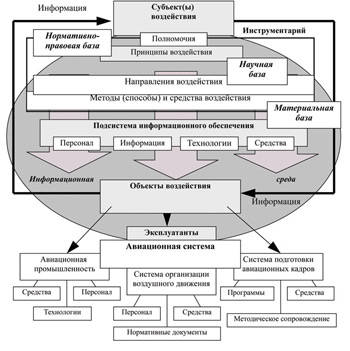 Today, the prediction of dangerous factors, even such as aircraft failures, violations or erroneous actions of flight personnel, has become quite possible with the use of modern scientific approaches and information technologies. The point was only for their implementation in practice. Moreover, the introduction of new approaches and technologies should be systemic in nature, with a clear distribution of funds and tasks at various levels of instances. All this testifies to the need to create a new flight safety system in the state aviation of the Russian Federation. Its main functional elements should be:

as a subject of impact, flight safety authorities are built according to a hierarchical structure with a clear distribution of functions, rights and duties at each level;

as an object of impact - all components of the aviation system, namely, the enterprise of the developers, manufacturers and repair of aircraft; all air formations (from individual units to associations); all training institutions (including initial training) or retraining of aviation personnel; the system of air traffic management in the totality of their components (personnel, facilities, technology, etc.).

The most important element of a modern safety management system that plays the role of a rigid control wiring should be a subsystem of information and analytical support, including means of collecting, transmitting, receiving (receiving), processing and distributing (replicating) information on flight safety issues; personnel involved in the collection, reception, processing and transmission of information; the means and technologies that it uses for these purposes, as well as the information itself, that is, the totality of information about the state of safety of flights in the aviation system and factors affecting its operation.

Instruments (tools) of the subject's impact on the objects of the system should be the authority of the management and flight safety authorities, as well as the methods and means that they will use in their work.

- development of technical means and technologies for monitoring elements of the aviation system;

- development of methods and creation of software-modeling systems for decision-making support by the authorities of the state aviation authorities;

- development of new technologies and systems for objective monitoring of the functioning parameters of the aviation system;

- Adjustment of the regulatory framework for the safety of state aircraft.

The first step towards building such a system should be the creation in the structure of flight safety agencies, including the Aviation Safety Service of the Armed Forces of the Russian Federation, information and analytical centers equipped with modern software-modeling complexes and staffed by highly qualified specialists. To do this, it is already necessary to decide what tasks, what scale they will solve and, accordingly, what software-modeling complexes should be equipped with.

It is obvious that the creation of such centers, determining the appearance of software products, information and analytical procedures in various instances, updating the regulatory framework for flight safety will require additional proactive scientific study of these issues, making appropriate decisions and, of course, certain material costs. But, as practice and world experience shows, it is impossible to change the situation on flight safety issues without substantial material costs. At the same time, the costs of creating a new, promising flight safety system in state aviation should be viewed not as losses, but as investments in the matter of a significant reduction in accident rates. And these are billions of rubles annually saved by the state and, most importantly, tens and hundreds of saved lives.

The construction of such a system should fully comply with the “Concept of Aviation Safety of the Armed Forces of the Russian Federation” approved by the Minister of Defense of the Russian Federation in 2012, which implies the adoption of radical measures to improve flight safety in military aviation. The creation and active functioning of such a system in the State Aviation will allow in the shortest possible time to raise the level of flight safety to the accident rates achieved today in advanced aviation powers, and most importantly, to reduce in the coming years aviation incidents with the aircraft of the State Aviation of the Russian Federation to the rarest events in practice.