There is no army without the General Staff 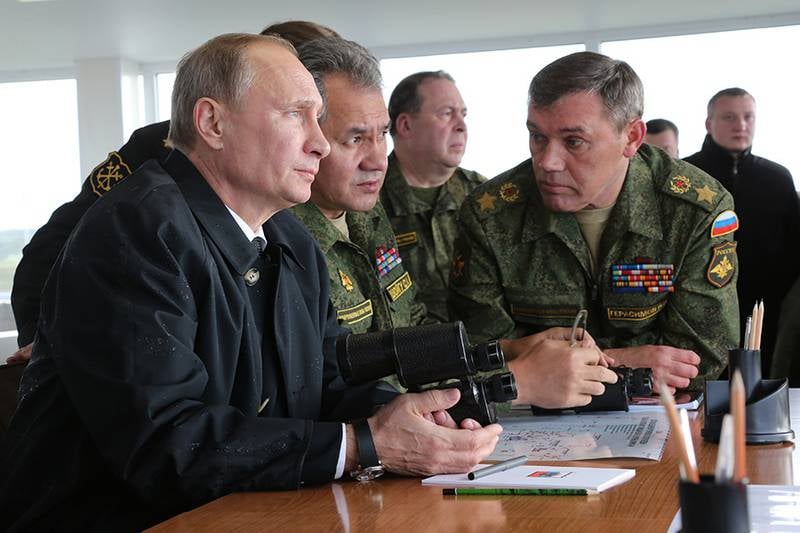 25 January marks 251 the year since the creation of the General Staff of the Armed Forces of Russia. On the eve of this date, the head of the General Staff, Army General Valery GERASIMOV, gave an exclusive interview to Viktor LITOVKIN, editor-in-chief of the Independent Military Review.


- Before the beginning of our conversation, Valery Vasilyevich, I can not fail to mention the holiday - the Day of the General Staff of the Armed Forces of the Russian Federation. This year, without exaggeration, our leading organ of military control, as defined by Marshal of the Soviet Union, Boris Shaposhnikov, “the brain of the army”, marks the 251 year.

- Yes. With the birth of the General Staff service in the Russian Empire, this essential element of the state’s military organization immediately began to play a noticeable and, over time, a crucial role in the life of the army. The General Staff officers have always been together with the troops in the days of defeats and victories, laying down and strengthening the traditions that allow the current generation of our officers to adequately perform all the tasks assigned to ensure the military security of our country.

- And what is the General Staff today? What are its main functions?

Today, along with the management of the daily activities of the Armed Forces, the daily resolution of military construction issues, the main functions of the General Staff also include: the organization of the defense planning of the Russian Federation; development of strategic operations plans; leadership of military intelligence agencies; organization of planning mobilization preparation and mobilization in the Russian Federation within the authority of the Ministry of Defense of Russia; coordination of the activities of other troops, military formations and bodies in the field of defense.

In addition, the General Staff organizes the development of proposals for the formulation and implementation of state defense policy and takes part in its implementation. As the Supreme Commander-in-Chief of the Armed Forces of the Russian Federation said at an expanded meeting of the collegium of the Ministry of Defense, held in December 2013, to approach her creatively, always think about how to take the next step towards the improvement of our big military machine. Of great importance in the performance of this task are the headquarters at various levels, and above all the General Staff. These are not just people who consider pieces of paper, shift and sew in affairs, but above all the analytical center. Today it is more important than ever ... "

Obviously, there is no better answer to the question of what result the leadership of the country expects from us.

- And how are military experts selected for service in the General Staff, where they are trained? What qualities should they have?

Analytical thinking, broad outlook, inner need and habit to improve their professional level - these are just some of the features that a candidate should have for serving in the General Staff.

All officers in the process of selection are interviewed and checked for the level of professional training directly in the structural units of the General Staff. First of all, the ability of officers to be creative and non-standard approach to the solution of any task is evaluated. The flexibility of thinking on a wide range of issues of ensuring the military security of the state is appreciated. General Staff officer, by example stories Russia should have an idea about the place and role of the army in the state and society, about the role of Russia in the past, present and future world, owning issues of geopolitics, geoeconomics, globalization of society.

An effective tool for the qualitative recruitment of military posts in the General Staff is the federal and departmental personnel reserve of the Armed Forces. In 2013, at the meetings of the Central Attestation Commission of the Ministry of Defense, the method of considering candidates for military posts on an alternative basis was introduced - at least three candidates are presented for one vacant military position.

The main and basic institution for training officers of the General Staff is the Military Academy of the General Staff, which for over 180 years has been training military personnel for strategic management. It is the successor of the Imperial Military Academy, founded in 1832 on the initiative of Russian Emperor Nicholas I. December 8, the Academy celebrated its 2013 anniversary.

On the basis of the General Staff Academy, officers are trained for a two-year program of higher military education, as well as professional retraining and advanced training programs for continuing professional education. In specialized specialties and areas of activity, officers undergo training in military academies of types and types of troops of the Armed Forces.

Military thought does not stand still. Weapons are being improved, forms and methods of conducting military actions are changing. All this needs to be known and taken into account daily in the course of fulfilling tasks and making management decisions. The broad horizons of the General Staff officer should cover the sphere of political and economic relations both within the country and abroad. It is necessary to possess daily full information about everything that is happening in Russia and abroad in the field of military construction and development of the armed forces, military and government control, in the field of training and use of troops and forces.

But, of course, the training programs of military academies do not cover all the spectrum of the activities of the Armed Forces. Therefore, the training of any officer in the Armed Forces is a daily and continuous process. Generals and officers of the General Staff is no exception. In addition to all the above, the officer of the General Staff must be an unconditional patriot of Russia, a spiritual and moral and in all respects a healthy citizen of the Fatherland.

- A National Center for Defense State Management is being established. What functions will it perform, including with respect to the Armed Forces? What will be the role of the General Staff? What will change?

- At the suggestion of the Minister of Defense Sergei Kuzhugetovich Shoigu, the Supreme Commander-in-Chief of the Armed Forces of the Russian Federation decided to establish the National Defense Management Center of the Russian Federation within the structure of the Ministry of Defense. 20 January 2014, as you know, laid the first stone in the building of the Center on the Frunze Embankment.

The created National Center will cover all levels of the leadership of the Armed Forces, and will also allow the efforts of the ministries and departments involved in the implementation of the country's Defense Plan to be coordinated by 49. For the first time, a vertically integrated multi-level automated control system will be created in the Ministry of Defense of Russia and a single information and control space will be created, ensuring the combined actions of heterogeneous forces and means. In addition, the National Center will become the main management tool for mobilizing the country.

In implementing this project, only breakthrough technologies will be used, the most advanced software solutions. Equipping them will allow you to quickly display the situation from any region, as well as the area of ​​operations of troops (forces), including those located at considerable distances from the points of permanent deployment.

- A plan for the construction of the Armed Forces of our country has been published. Can it be made to it if necessary adjustments or is it firm?

The Plan for the construction and development of the Armed Forces reflects the issues of manning the types and types of troops that belong to them, arming military and special equipment, modernizing its existing designs and developing advanced ones, developing military infrastructure, and all types of support. In addition, for the implementation of the tasks set by the president, the synchronization of all activities, programs and plans for the construction of the Armed Forces, a detailed Action Plan of the Ministry of Defense for the period up to 2020 was developed.

It covers all the activities of the Armed Forces - from maintaining the combat readiness of the troops to increasing the attractiveness of military service. All events are monthly detailed in plans and schedules that are developed from the Deputy Minister of Defense to the compound and the military unit inclusive. Organized a rigid system of monitoring the implementation of the plan.

- I know that the General Staff is actively involved in international military cooperation. What are the challenges facing him?

- The General Staff takes an active part in the preparation and conduct of international military cooperation on a bilateral and multilateral basis. There are many tasks. The priority directions of international military cooperation for us are: the development of the military component of the CSTO; strengthening the military organization of the Union State with the Republic of Belarus; ensuring the electoral military presence of the Russian Federation in various regions of the Commonwealth and in the world to strengthen regional and global security; strengthening the security system in the Central Asian region in view of the withdrawal of the international security assistance force from it; preventing the emergence of new nuclear missile threats along the perimeter of Russian borders; continued military cooperation with the US and NATO on arms control, non-proliferation issues weapons mass destruction, ensuring regional and global security; implementation of decisions of the political leadership of the state to promote the Russian approaches in the field of missile defense, meeting the requirements of the Treaty on Strategic Offensive Arms; fulfillment of Russian commitments in the field of military-technical cooperation in the supply of weapons and military equipment from the presence of the Russian Ministry of Defense.

In conclusion, I would like to congratulate the staff of the General Staff of the Armed Forces of the Russian Federation on the holiday! To wish you good health, family happiness, patience, endurance and perseverance necessary to fulfill the tasks set by the leadership of the country and the Ministry of Defense.

Ctrl Enter
Noticed oshЫbku Highlight text and press. Ctrl + Enter
We are
On the other side of the “red” and “white”. Izborsk Club ReportBronislav Omelichev: "Marshal Akhromeev was the successor of the famous galaxy of the Chiefs of the General Staff"
Military Reviewin Yandex News
Military Reviewin Google News
56 comments
Information
Dear reader, to leave comments on the publication, you must sign in.