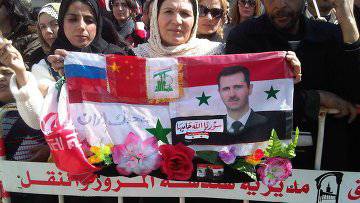 The conference “Geneva-2”, about the opening of which all sides of the world community talked so much, has finally started. Her idea was launched last May after a meeting between Russian Foreign Minister Sergey Lavrov and US Secretary of State John Kerry. However, if Russia called for the early convening of the event, the United States did everything to tighten it. In parallel, they were preparing another trump card - a cynical provocation using chemical weapons and subsequent aggression, but this plan was thwarted.


Before the conference, Syrians living in Switzerland staged a rally in the city of Montreux, where the conference opened. They came with Syrian flags and portraits of President Bashar Al-Assad to show the true, patriotic position of the people of Syria.

Unfortunately, the opening of this international forum was associated with a mass of provocations, both large and small.

Even before its start, the biggest scandal that puts the results of the “Geneva-2” история with an invitation to the Iran conference.
This question could not be solved until the last day. At the same time, UN Secretary-General Ban Ki-moon himself argued that inviting Iran would be a very important and constructive step, that Iran is a very influential country in the region, and it can play a significant role in the process of peaceful settlement of the Syrian crisis.

However, Ban Ki-moon was waiting for international consensus on this issue. Most countries of the world favored the presence of Iran, with the exception of the United States and Saudi Arabia. And on January 20, it would seem, the UN Secretary General committed a courageous act — he sent an invitation to Iran. He even convened a press conference on this occasion, at which he said: "Iran should certainly be part of the settlement of the Syrian crisis."

Against this step, a spokesman for the US Department of State Jennifer Psaki immediately spoke out, then very quickly! - the so-called “Syrian opposition” (more precisely, a coalition consisting of Syrian émigrés and put together in Doha).

And already on January 21, frightened to death by his own second courage, the secretary general recalled the invitation to Iran. As in the famous joke: "A gentleman is a master of his own word: I want - I will give, I will want - I will take it back." However, he himself was afraid to announce his own decision - this was done at the evening conference by his press secretary, Martin Nesirki.

On this occasion, Iranian Foreign Minister Mohammad Javad Zarif said that this behavior Ban Ki-moon unworthy of the status of UN Secretary-General. He added that Iran’s invitation was preceded by negotiations between him and the Secretary General, and the parties ’position was clearly stated: the Iranian side stated that it did not accept any preconditions for participation in the conference, and Ban Ki-moon assured Zarif that no pre-conditions and does not advance.

Nevertheless, it was precisely Tehran’s rejection of the precondition — public statements about unconditional support for the Geneva communique of 30 on June 2012 of the year — was the formal reason for the withdrawal of the invitation.

And the point here is not at all in the support or non-support by Iran of the Geneva communique, but in the fact that Iran was the only country to which the United States and its allies put forward preconditions that Tehran considered demeaning. No other country required such conditions, and even more so - no one demanded such from Saudi Arabia and Qatar, not to mention the States themselves.

In this regard, Iranian President Hassan Rouhani said that “Geneva” -2 failed before it began, because not all influential players are taking part in it. ”

The Russian side also spoke against the abolition of the invitation to Iran. Russian Foreign Ministry spokesman Alexander Lukashevich stressed that “such a move would weaken international efforts to get out of the crisis in Syria.” “We have repeatedly stated that in the upcoming event within the framework of the“ Geneva-2 ”all key states that influence development events in Syria. The Islamic Republic of Iran can play a significant role in advancing the peace process in the Syrian Arab Republic, including in reaching relevant agreements between the Syrian parties. Tehran has also repeatedly confirmed its readiness to participate in the work to achieve a peaceful solution to the Syrian problem within the framework of Geneva-2. Unfortunately, the Syrian opposition, continuing the policy of putting forward ultimatums and preconditions as guarantees of their participation, once again complicated the preparation of the upcoming event, ”said Lukashevich’s commentary published on the website of the Russian Foreign Ministry.

But this is not the only provocation before the international conference. The path of the Syrian delegation in Montreux has turned into a whole “odyssey”. At first, France did not want to give permission to cross the airspace of the Syrian delegation. The Syrian side was exploring alternative routes, but at the last moment France still had to give permission to cross its airspace, as the situation threatened a major diplomatic scandal. At the same time, the French Foreign Ministry denied reports of a ban on flying, but the permission came at the last moment.

When the plane was already on the way, it had to land at Athens airport, refuel and go farther. But in Athens, the Syrian delegation was denied refueling. The crew was announced that due to the sanctions imposed on Syria, Olympic Air could not carry out this operation. While there were phone calls and approvals, the plane was held at the Athens 4 airport for an hour. As a result of the delay, a scheduled meeting between the Syrian Foreign Minister Walid Al-Muallem and the UN Secretary General Ban Ki-moon fell apart before the conference.
After lengthy negotiations, the plane nevertheless went to Switzerland, and the Greek Foreign Ministry even apologized. But the fact that it was the Syrian delegation that was subjected to such discrimination suggests that it was deliberate dirty tricks that were made, albeit petty.

A larger provocation is the accusation that appeared on the eve of “Geneva-2” against Syria, allegedly in the “mass execution of prisoners”. It is clear that the opening of the conference could not but be accompanied by any noisy information stuffing. He appeared in the newspaper The Guardian with reference to a certain “military policeman,” a deserter who had fled the country. He allegedly "secretly took photographs from prison on flash drives and handed him over to a friend from the" opposition "who enjoys the support of Qatar," the newspaper said.

Based on this extremely dubious source, the undoubtedness of which is only in one thing - it is connected with Qatar - no less dubious "lawyers" even made a report with the accusations.

The authors of this opus were former chief prosecutor in the case of Yugoslav President Slobodan Milosevic in the illegitimate Hague court, royal lawyer Jeffrey Neis, former prosecutor of the special court in the Sierra Leone case, royal lawyer Desmond de Silva, and Dewige Crane, who charged the President of Liberia Charlescu Silzhoz Silva, who charged the President of Liberia Charles I Silva, who was accused of defending Sierra Leone.

How can you not exclaim "Ba! All familiar faces! Each of the lawyers who made up the stuffing has a rich past in the matter of contract charges against unwanted politicians and judicial reprisals against them, which sometimes ended in death ... It only remains to add that this “report” was commissioned by a major London law firm that represents all the same Qatar.

So, to the noise of all kinds of provocations, the conference opened. It involves the foreign ministers of 39 states, the UN secretary-general, representatives of the League of Arab States and the Organization of Islamic Cooperation, as well as a delegation from Syria and members of the so-called "Syrian opposition."

On the eve of “Geneva-2”, Syrian President Bashar Al-Assad gave an interview to French Press France. To the journalist’s question: “What do you expect from the Geneva Conference?” The Syrian leader answered:

“The most important thing we are constantly talking about is that the Geneva Conference should give clear results regarding the fight against terrorism in Syria. In particular, it must confirm the need to exert pressure on those countries that export terrorism, send militants, supply terrorist organizations with money and weapons. These are states such as Saudi Arabia, Turkey and, of course, Western countries that provide political cover for terrorist organizations. This is the most important decision, the most important result that the Geneva Conference can give. Any political decision without fighting terrorism is irrelevant. There can be no political process when terrorism is everywhere - not only in Syria, but also in neighboring countries. If viewed from the political side, the Geneva-2 can contribute to the dialogue process between the Syrians. In Syria, the intra Syrian process should be carried out, and "Geneva-2" can only support it, but cannot be a substitute for it. "