Legend of the sinking of the cruiser 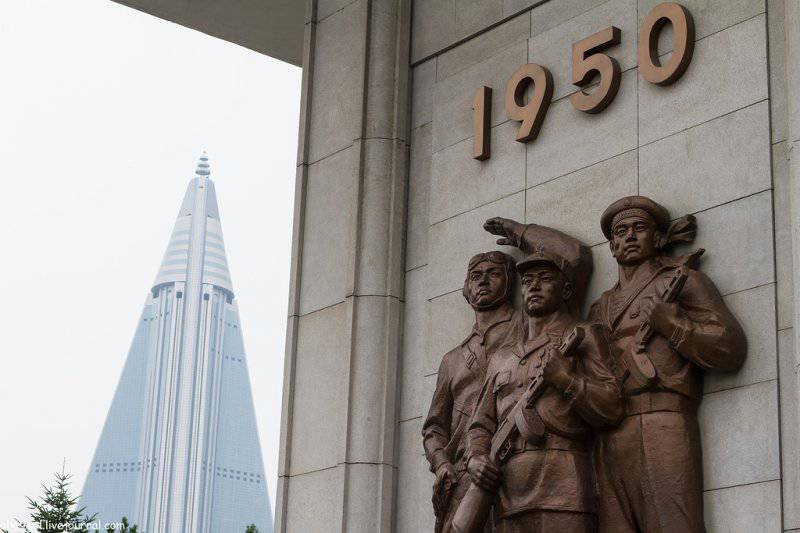 2 July 1950 over the expanses of the Sea of ​​Japan thundered several explosions. The episode entered history like the battle of Chamonchin Chan, was the first case of a sea confrontation between the DPRK and fleet Allies during the Korean War.

As is often the case, both sides adhere to strictly opposite points of view on the results and significance of this battle. Subjects of the Juche ideology are sure that at that time they managed to sink a large Allied warship - the cruiser Baltimore. Of course, the Yankees carefully concealed the loss of a heavy cruiser from the rest of the world.

As a result, a whole detective story was born with a conspiracy component and conspiracy theory. What if the Koreans really banged the Baltimore long before its “official cancellation” in 1971?

... The torpedo boat rushes forward, raising fountains of spray. The commander shouts “Fire!”, The gallant crew prepares to attack at their combat posts. The torpedo rushes forward, to the place where the board of the enemy ship sparkles with thick metal. Hit Victory!!!

The sculptural group “Guards of the Sea of ​​the Motherland” in one of the squares of Pyongyang demonstrates the courage and bravery of the North Korean sailors who are ready to fight a numerically superior enemy at any moment and to overthrow the foe into the sea abyss. Just as it happened more than half a century ago - the hot summer of 1950. 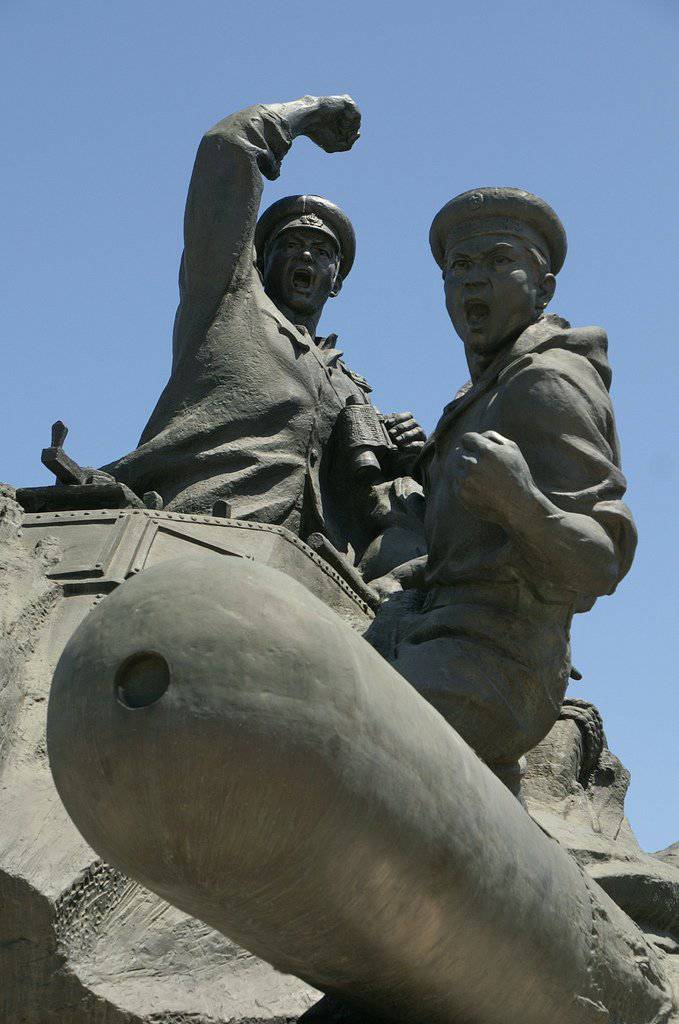 At midnight on July 2 1950, the 2 Division of torpedo boats left the Sokhcho naval base with the firm intention to detect and attack the American squadron off the coast of the Korean Peninsula.

"Our sailors were filled with steel faith in victory and determination to crush the enemy fleet."

Moonless night and heavy bursts of waves. But Koreans stubbornly continue to search for the enemy in a given square. Without radar and other modern devices, relying only on the vigilance of their own eyes and the power of thought. Finally, at about four o'clock in the morning, dark silhouettes of the ships appeared in front ...

"They discovered the enemy, and their hearts were even more intense with hatred of the aggressors."

Like a flock of stealing tigers, torpedo boats silently approached the compound of enemy cruisers. The dark summer night and the numerical superiority put down the watchfulness of the watch on the ships of the US Navy. None of them expected our attack. In vain!

At the signal of the division commander, Comrade Kim Gong Oka, three high breakers boiled on the sea surface: torpedo boats №21, №22 and №23 rushed into the attack. Ahead, a huge “floating island” was expanding and growing in size - the 200-meter cruiser “Baltimore”. Mighty steel monster with dozens of guns and 1000 American warriors on board. They came here to bring grief and destruction to the coast of Korea. There will be no mercy for them! 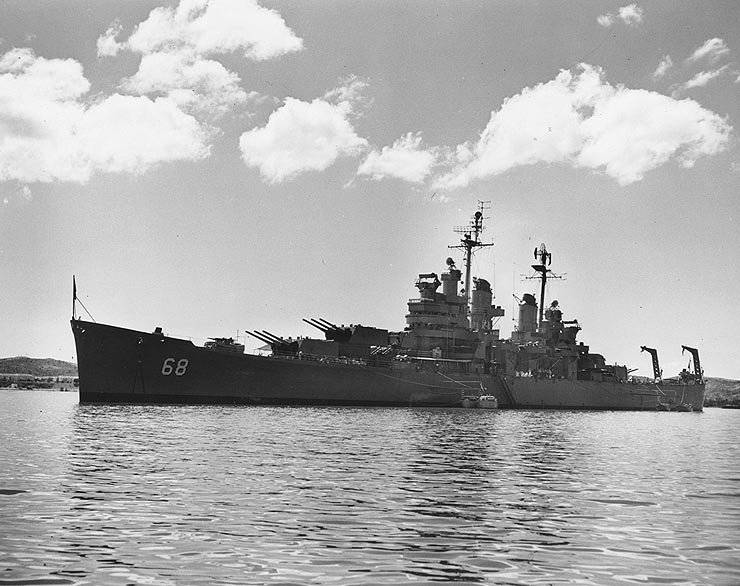 USS Baltimore (CA-68)
Like a smooth streamlined melon, the torpedo slipped into the water and a minute later hit the side of an enemy ship. The confused enemy finally came to himself and fiercely returned fire. The sea was boiling from the ruptures of shells of the main, universal and anti-aircraft caliber.

“The fiery wind beat their faces, but they rushed forward courageously.”

No sooner had a heavy rumble dispersed over the sea surface from the first explosion, a new torpedo hit the side of the cruiser. The crew of the torpedo boat №21 to the end fulfilled its sacred duty to the Motherland.
In a panic, the Yankees jumped overboard the sinking ship, when two new torpedo explosions finally broke the Baltimore in half, resting its debris at the bottom of the deep East Korean Sea.

Developing the success of the attack, the boats set up a smoke curtain and, having regrouped the line, continued the destruction of the enemy squadron. Boat number XXUMX caused the fire of an American destroyer. At this time, his comrades came close to the light cruiser and fired a torpedo salvo at full speed. Sea space shuddered from a new explosion - one of the torpedoes landed in a light American cruiser. 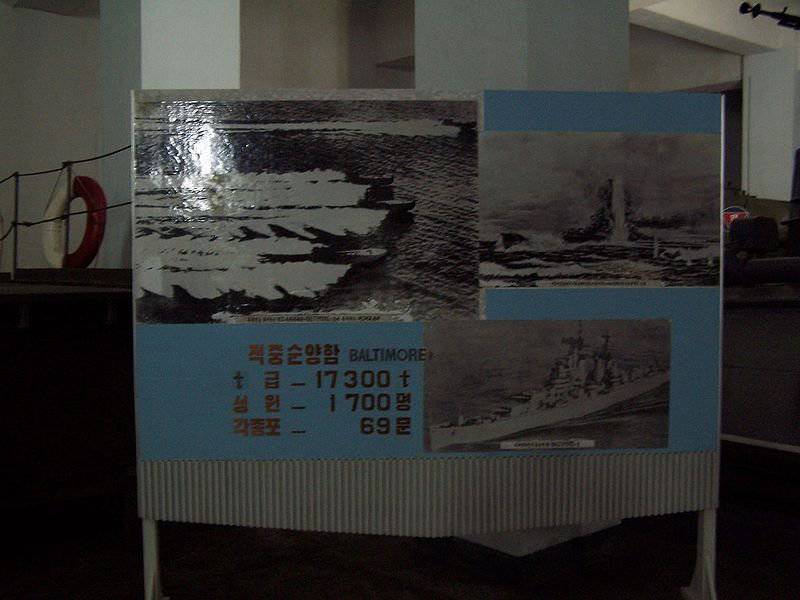 "In that battle, our brave sailors achieved victory, which the history of battles at sea did not yet know."

The enemy heavy cruiser was sunk and another light cruiser was damaged. No one thought that such a small force could successfully attack such a large and well-armed group of surface ships.

“The foreign press wrote about this event: a huge cruiser was sunk by torpedo boats. This is not just a fight. This is a miracle.

The cruiser "Baltimore" had a displacement of 17 thousand tons. The length of the cruiser exceeded 200 meters. It had 69 ship guns and there were 1100 sailors.

The crew of a torpedo boat totaled only 7 people. Its displacement was equal to 17 tons, and the armament consisted of an anti-aircraft machine gun and two torpedoes. 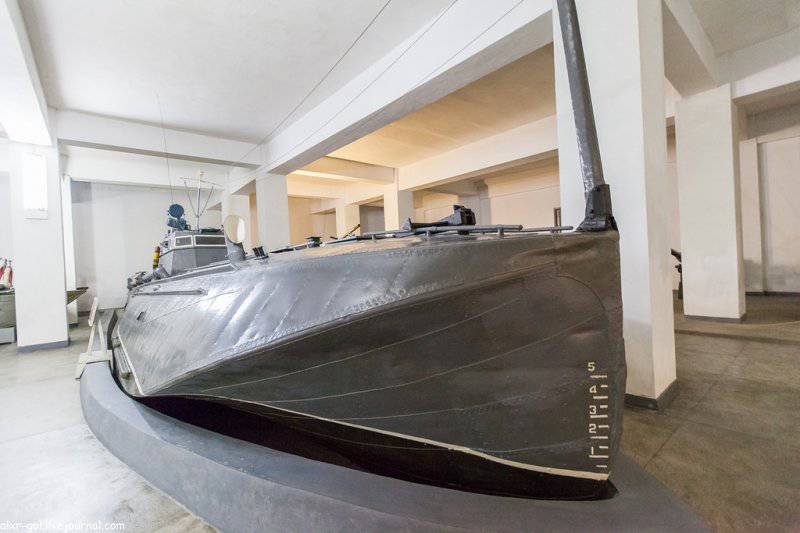 Small torpedo boats were like grains of sand against the backdrop of huge warships. In the war between the young DPRK and the United States there was too great a difference in the balance of forces. But, despite the brute force and numerical superiority, the American aggressors eventually had to kneel before the proud people of Korea.

“In memory of that great feat accomplished by our sons 2 July 1950, a monument was erected here and a military hero in Pyongyang exhibited one of the three heroic boats that took part in that battle on the territory of the stronghold of military glory.

Long live the ideas of Juche and Songun, which serve as a beacon for all mankind! ”

On the night of July 2, a compound consisting of the American cruiser “Juno” and two British cruisers - the heavy “Black Swan” and the light “Jamaica” - patrolled the coastal waters of the Korean Peninsula.

At the predawn hour, the radars of the ships detected suspicious activity on the horizon. The ship was turned closer to the coast, and soon the watchmen noticed a convoy of a dozen barges with cargoes for the North Korean army under 4 guard of torpedo (or patrol) boats (it was not possible to precisely identify the enemy). Despite the enormous difference in power, the Korean boats did not think to retreat. They boldly rushed to the enemy.

An analog computer buzzed at the “Juno” combat information post, reckoning the location of the target relative to the ship, its speed and course. Artillery turrets were set in motion on the upper deck - all six twin 5 '/ 38 units turned to the desired angle, and projectiles dropped to the gun trays. A second later, on the site of the North Korean torpedo boats, poles of water shot up alongside with wooden chips and fragments of metal structures. 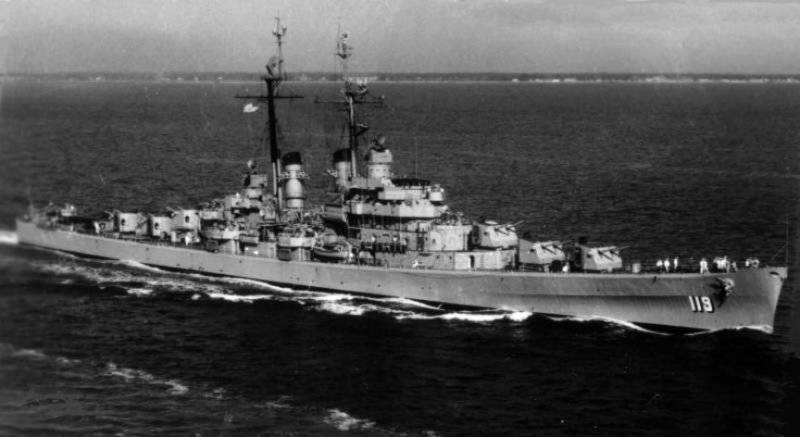 Light cruiser USS Juneau (CL-119)
When the spray and smoke cleared, observers reported on the destruction of three enemy boats. The fourth was in full swing behind the horizon. No order for persecution was received.
North Korean convoy scattered in coastal waters. Squadron of the UN without a loss returned to the same course.

Subsequently, when the DPRK announced the sinking of the heavy cruiser “Baltimore”, US officials made a surprised look and said that the “Baltimore” never participated in the Korean War. At the beginning of the 50's, he acted as part of the Mediterranean Sixth Fleet. Moreover, from July 1946 to November 1951, the cruiser was in a mothballed state in the reserve fleet in Brementon and in no way could take part in the naval battle off the coast of Korea 2 on July 1950.

Truth Is Out There

Do not rush to laugh at the inventions of the North Koreans and call the whole story with "Baltimore" ineptly decorated propaganda. North Korea has repeatedly proved that its threats and statements are not just words. At the slightest opportunity, the leadership of the DPRK goes to the most decisive measures to remind the world of its existence and punish all those who believe Pyongyang is guilty of the troubles of the Democratic People’s Republic of Korea.

Seamen of the DPRK naval forces recorded two solid victories - the forceful seizure of the American reconnaissance ship Pueblo (1968 year) and the sinking of the South Korean corvette Cheonan (2010, controversially - the DPRK declared not to participate in the incident). So the courage and determination of the Koreans not to occupy, as well as combat training and ingenuity.

Further, the possibility of drowning a cruiser by a torpedo boat does not cause much surprise. Torpedo - powerful weapon, and if the speedboat managed to get close to the enemy, then the victory was in their pocket. Suffice it to recall their first combat use - the Russian boats Chesma and Sinop sank the Turkish steamer Itinbach (1878). So the Koreans even lied about the uniqueness of the attack - in the history of the known cases and more interesting.

The third point: "Baltimore" is not just a warship, but the same-name series of 14 heavy cruisers from the Second World War. The statements about the absence of a ship with such a name in the combat zone does not mean the absence of cruisers of similar design. 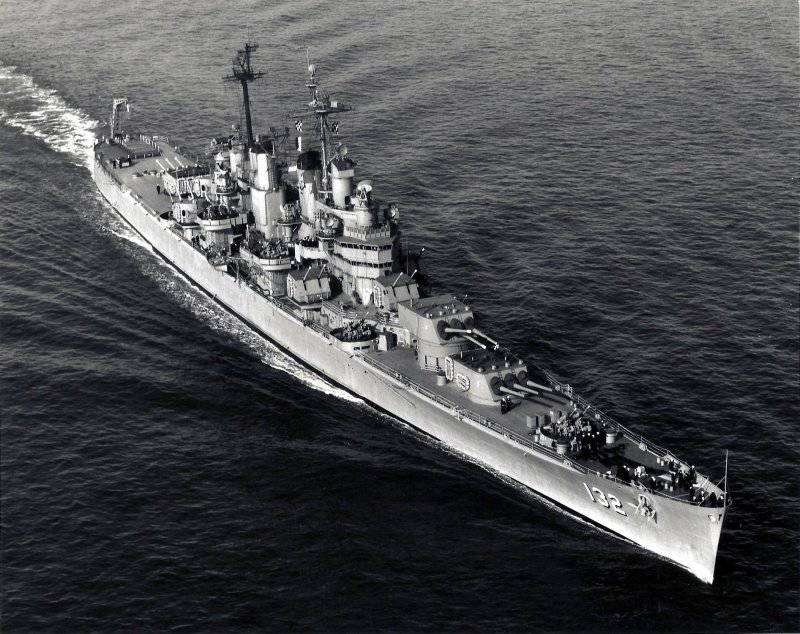 USS Macon (CA-132) - 11-th in the series of cruisers of the type "Baltimore"
Finally, the very fact of the 02.07.1950 battle is beyond doubt - the Yankees and the British found torpedo boats, the Koreans rushed to the attack, despite the numerical superiority of the enemy.

What ended the fight? Was there a torpedo hit on one of the Allied ships? Most likely, the North Korean sailors died the death of the brave, trying to attack the heavily armed ships with rapid-fire cannons and modern SLA. And yet, if by chance it turns out that one of the Baltimors had damage caused by torpedo weapons, this could be a rather interesting turn in the events of the Korean War. 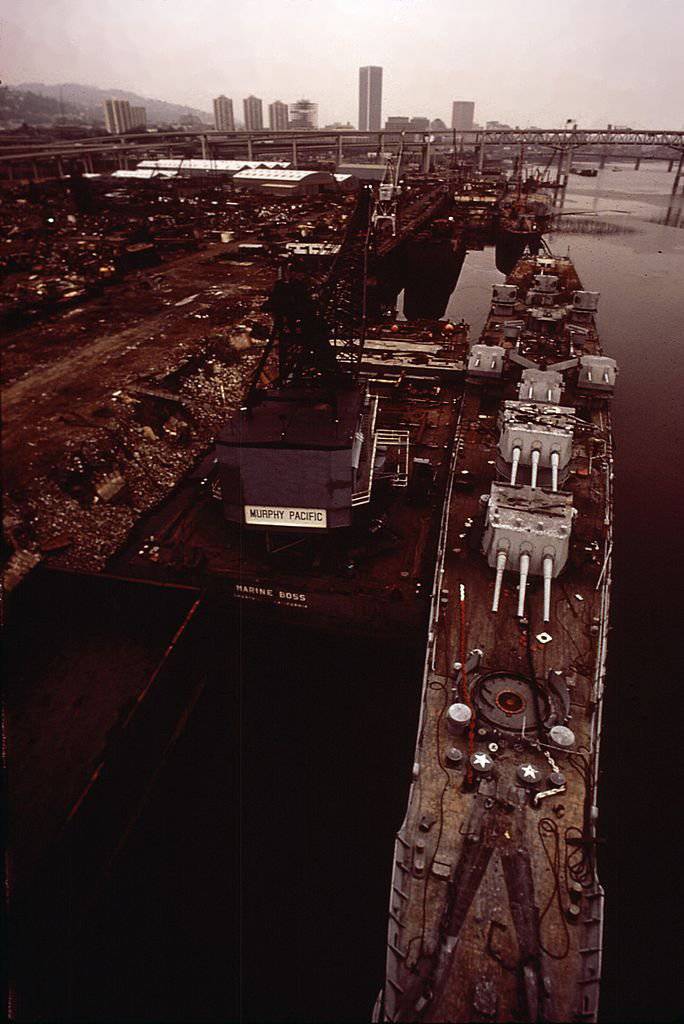 "Baltimore" is cut into metal in the vicinity of Portland, 1972.