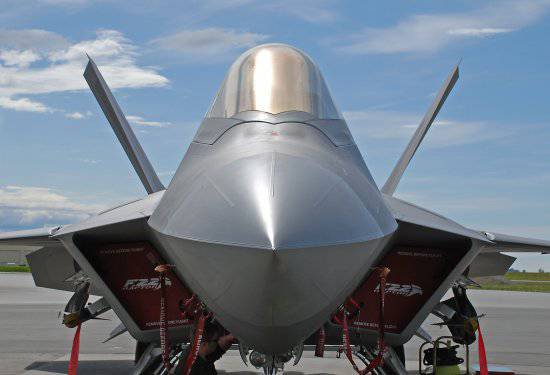 Military experts after the first strikes of the coalition air forces on the positions of supporters of Muammar Gaddafi are surprised by the absence of the F-22 Raptor fighter in Libya’s sky. Analysts point out that Raptor, created by Lockheed Martin, a US corporation, is currently in deep reserve due to its inability to establish operational communications with other models of coalition planes in the sky, as well as due to the limited ability to hit ground targets.


Lexington Institute expert Loren Thompson told the following: "The developers of a completely new F-22 had a dilemma - providing the machine with all sorts of communication tools to achieve a high level of adaptability, or alternatively designed so that as little as possible radio waves to make it almost invisible to radar. Engineers have found a compromise. "

As a result, the F-22 Raptor can exchange live data directly with exactly the same F-22 Raptor. He can only get data from other aircraft models, and this is at best, but the ability to transmit any information is no longer there. The reason why designers are invisible is because of the fact that if radio waves of different frequencies emanate from an aircraft in the air, its location on the airspace map is easy to calculate. It turns out that what made the F-22 Raptor the most invisible aircraft to date in the world at the same time takes away from it the communicative possibilities available to other machines.

There are problems and it is necessary to recognize significant in F-22 Raptor and with weapons class air-to-ground. Of the entire arsenal of weapons of this class, the aircraft can use only 453-kilogram bombs with GPS-guided, designed to defeat fixed targets. As a comparison, the F-15E Strike Eagle in combat gear can carry more than 10 tons of various types of air-to-surface weapons.

According to the USAF air strike strategy, the F-22 Raptor must accompany and guard the B-2 bombers during an operation to disable enemy air defenses. At the same time, the US command has officially confirmed that at this point in time, no F-22 Raptor has flown to Libya.

Eric Hilliard, a spokesman for the US Air Force headquarters in Africa, said: “At the moment I don’t see any prerequisites for the F-22 Raptor to be used in the sky of Libya as an escort for B-2 bombers. Also, nothing gives grounds to talk about the possibility of F-22 Raptor in Libya hereafter. "