Marine Le Pen: "The European Union has shown its inconsistency" 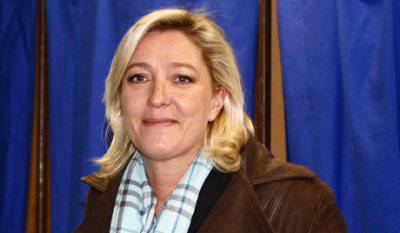 About why the European Union is doomed to disintegration, about the negative consequences of clandestine immigration and about the rise of patriotic movements in Europe, the leader of the National Front of France, Marine Le Pen, told the Voice of Russia in an interview.


- In one of the speeches you emphasized the importance of the work of the nationalist party with its electorate. Why are you and everyone who shares your opinion, sure that you can update Europe?

- Why do you think that United Europe is a kind of anomaly? And that her disintegration will not cause chaos? You also stated that you expect nothing from the European Union except its collapse. What are these conclusions based on?

“I think the European Union is like the Soviet Union.” It cannot be transformed, since it is based on a defect built into it: the disappearance of the sovereignty of various European nations. It is impossible to build an empire, depriving peoples of independence. At the same time, they are being pulled out of the democratic process. And I believe in democracy.

I do not know which of the most important changes the European Union will agree on. I talked about four big reforms that are necessary for the EU: to return to each people sovereignty in lawmaking so that national laws are above European directives; return economic freedom to nations with the possibility of establishing "economic patriotism", as well as economic protection on their borders; regain territorial sovereignty, that is, absolute control over national borders; and regain the freedom of the monetary system, that is, return to the national monetary system.

Since I am absolutely sure that the European Union will never agree to these changes, I conclude that it is absolutely impossible to reform it. The only way out is to leave him alone and watch him collapse. And then restore the great Europe of nations and cooperation that I see.

- What are your predictions on the results of the May elections? How do you assess the chances of the "National Front" in these elections to the European Parliament?

- My goal is to win these European elections. My other goal is the convincing victory of our party, patriotic movements, patriot deputies in the European Parliament. We are able to represent a blocking minority in order to prevent the European Union from continuing the policy of federalism. We see today that there is not a single region where the life of our peoples has improved. That is, you need to block this federalism and do everything to go back, to join the framework of individual nations, returning each of its own power.

- You often expressed your opinion about the negative consequences of underground immigration, both in Europe and in France. What problems does it cause?

- Thousands of problems. They are caused by mass immigration, both legal and underground.

First, we need to talk about economic issues. When you allow thousands of foreigners to enter a country where there are already some unemployed, they either become new unemployed and make the financial system heavier, or they potentially become direct competitors to your own employees. After all, they often agree to work for less money than they cause unfair competition.

Secondly, naturally, they affect the share of social support. Since there is a family reunion program for newcomers, they come with their wives and children, and then enjoy the state’s generosity in social support. In France, this applies, for example, to a free school, free health care ... For them free, not for the French!

The next problem is the problem of culture. When immigrants come in large quantities, they arrive with their codes of conduct, with their morals, with their own culture, different from ours. In many neighborhoods, this represents a real revolution, followed by demands, the purpose of which is to change in our country, change our laws, our habits. That is, the purpose of these requirements is the ability to directly influence national identity.

- Europe often reproaches Russia for not respecting human rights. But France in this area is slightly higher than Turkey. There are more prisoners in French prisons than in United States prisons. Can you comment on this?

- I did not wait for the statements of the Human Rights Committee to understand that French democracy is far from perfect. In particular, in the field of freedom of speech. It seems to me that from the recent events the prohibition of the performance (satirist author Dieudonné, NdT.) Highlights the underlying problem. I believe that freedom of speech is a right to fight for every day. It is also true that in this area France was condemned more often than Russia. Both our countries must fight for freedom of speech to be achieved, since this is the most important component of democracy. This is one of the components that distinguishes democracy from the regime of censors.

I often hear from French leaders reproaches Russia for non-observance of basic democratic rights. In response, I have to declare in front of the television cameras that France, which teaches the whole world, should “turn on itself”.

- At the same time, if you look at the recent court proceedings in Russia related to freedom of expression, what could you say? Are they worrying? And if you compare it with a performance canceled in France ...

“I think the abuse of freedom of expression is better than the abuse of censorship.” Regardless of the payment for it. This is the price of democracy. I believe that this is true for all countries. First of all, for my country, because it interests me first of all.

- But do you think that Russia can set an example?

- How can I say that Russia can serve as an example, because it follows us on this list? I believe that everyone should make an effort under any circumstances. Only one difference: Russia does not teach France, and France teaches Russia, although it itself is in a precarious position.

“I was the first person who proposed that France grant political asylum to Mr. Snowden.” Everything is clear here. You are right when you say that the position of France in this area should be criticized. France spoke with extreme caution in the face of the United States.

The problem is that France, like the European Union, is dependent on the United States. That it follows America under any circumstances, including internationally, for several decades now. She plays along with all her geostrategic decisions. It is time for France to become free, sovereign, to find its own special path. And stop obeying the requirements of the States.

That is why I irreconcilably objected to the free exchange agreement between the European Union and the United States of America. I believe that it not only does not meet our economic interests, but can forever tie us to America in terms of the economy, the monetary system and politics.

- Let's talk now about the President of the Republic ... About the scandal that unfolds before our eyes ... How will this scandal develop from the personal life of the president? How do you look at his possible resignation? Maybe early elections will be held?

- I do not think that the president will resign! I think that every citizen of France has the right to protect his private life, which will not prevent the French from assessing the person himself, after assessing the President of the Republic. We cannot forbid people to have an opinion about the behavior of their ruler. I repeat, reproaches to Mr. Hollande arose long before the present situation. Let me remind you that there is a “situation” with the first lady of France, who lives in the Elysée Palace, the state pays her expenses, she is given a personal secretary, although she does not have legal status. And it was a problem from the very moment the president came to power. You know that in France they say that Francois Hollande does not know how to choose ... and he proved it once again.

- Earlier you criticized the position of the government of Hollande and Sarkozy on the Syrian issue. You blamed them for supporting Islamic fundamentalists. You said that this "is the moral and historical mistake of our rulers." Can you comment on these words? What do you think is Russia's role in the current situation in the region?

- I just see that I was right! It is clear to everyone today that the rebels, who were exposed as “defenders” of democracy, belong, for the most part, to the Al-Qaida factions. And I was right about both Syria and Libya! I was right when I said that we are getting involved in a conflict, because we want to bring Islamic fundamentalists to power! And that we will pay dearly for this situation. What happened! Weaponwhich “surfaced” in Mali, this is what we delivered to Libya! And every day my position is increasingly confirmed.

Obviously, the participation and wisdom of Russia, which has brilliantly returned to the political arena and made it possible to avoid military intervention, should be assessed positively. I think that thanks to Russia we avoided a new disappointment. I hope that this situation has not gone too far and we can get out of it. Because, of course, we think about the Syrian people, who continue to live during the civil war.