January 14 2014
75
The terrorist atrocities that literally blew up the peace in the country at the end of last year led to the realization that the system of protecting the Russian population from extremist attacks is far from perfect. It’s impossible to deny that the work of the Russian special services is enormous, but at the same time it’s impossible to deny the fact that weaknesses in such work still remain. Both our authors and our readers argued about the presence of weak points in the actions of the Russian special services, often turning to emotional evaluations of what happened, and these emotions against the background of the Volgograd tragedy were quite understandable. 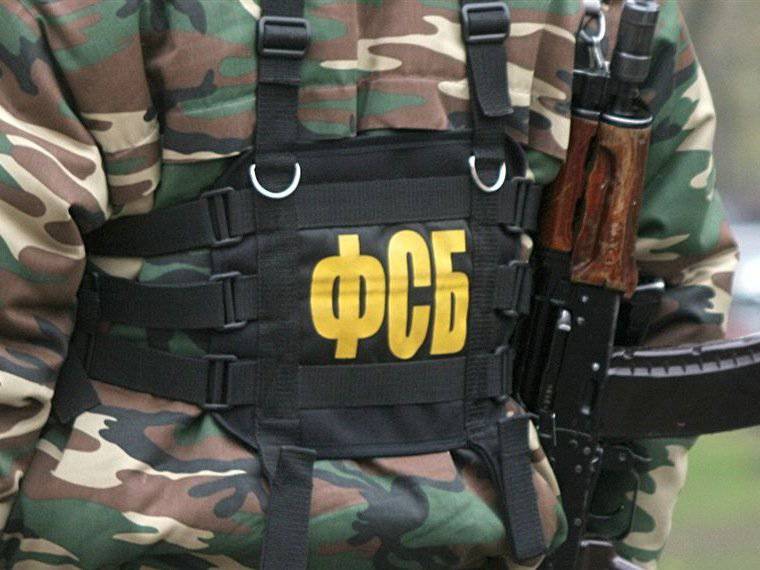 One of the sharp arrows of criticism of the Russian special services was that, after the liquidation of the militants in various regions of the country, practically no attention was paid to the families of the militants. Widows, sisters, brothers who by that time were already involved in pseudo-Islamic movements, were psychologically suppressed, and whose will was completely subordinated to those who are one of the main links of the extremist underground, could have been destroyed by the terrorists killed. Those relatives remained who could be involved in the extremist underground. It is obvious that these members of militant families, after additional psychological treatment, could either take up weapon, or wear suicide belts on themselves in order to strike at a certain place at a certain time at the purpose set by the “puppeteers”. Often such a goal turned out to be ordinary civilians - people living ordinary lives in ordinary Russian cities.

Another criticism arrow, directed towards the Russian special services, was related to the fact that so-called Muslim spiritual centers, courses of teaching the Arabic language at various mosques by law enforcement officers were paid, to put it mildly, not the closest attention. In one of these Moscow centers, the notorious Dmitry Sokolov learned Arabic, who became one of the rank-and-file co-organizers of the terrorist attack in October in the Volgograd public bus, in which the suicide bomber (Sokolov’s Sharia wife) Laid an explosive device.

Now it can be noted that the critical remarks made to the Russian special services turned out to be not unsuccessful. It is distressing that the corresponding work was organized somewhat late (after several dozen deaths of the residents of Volgograd), but, nevertheless, the revitalization of the work of special structures began to lead to tangible results.

So, from the beginning of 2014, the media began to receive information from the press services of law enforcement agencies not only that a certain militant was eliminated in a certain region, but also that several so-called “black widows” were taken under the hood - women who at one time were married to militants, as well as "Slavic Wahhabis" - ethnic Russians who stood up to let Wahhabism. Perhaps the greatest success of the special services in this direction was achieved in the Astrakhan region. In this region, investigators detained Victoria Volkova, whose spouse (militant Viktor Volkov) was destroyed during an anti-terrorist operation less than 2 years ago in Dagestan. Victoria adopted Islam a while ago, taking the Muslim name Aisha. The detention was carried out after a homemade bomb was found at Aicha (Victoria )’s dacha, which included a plastid, a fuse, and metallic cuts as striking elements. The young woman herself claims that she did not know anything about the existence of this bomb, and that perhaps she (the bomb) had remained there since the time of the terrorist activity of her now deceased husband.

Astrakhan news portal Kaspy.info reports that the husband of Victoria Volkova - Viktor Volkov - arrived in the Astrakhan region from Primorye, where he was engaged in the sale of cars that are registered in theft, as a member of one of the coastal gang groups. For his criminal activities, Volkov was convicted and sent to a colony where he converted to Islam (or, more precisely, embarked on the path of radical pseudo-Islam), turning into Valid (took a new name). According to another Astrakhan publication Astra News, Volkov took the path of radical Islamism not in prison, but while working as a loader in the Astrakhan market.

Anyway, after the release of his freedom and a short time of work, Walid (Victor) again went to jail due to the fact that illegal weapons were found in his house. Less than six months later, Volkov left the colony, after which he ended up in Dagestan in the so-called Kizilyurt gang-group, along with other radical "colleagues" Ismail Gamzatov and Vitaly Isaenko.

In August, the spiritual leader of Dagestan, Said Afandi Chirkeysky, died when Xinumx was undermining Aminat Saprykina’s suicide bomber, and the operational services in search of the organizers of the crime reached the very Kizilyurt band that Volkov was in. Volkov and several other members of the gang-group destroyed. Victoria (Aisha) Volkova became a widow with two children. According to the latest data, Victoria does not work anywhere, she professes Islam. Now investigators are working with the widow of the militant to find out whether the bomb in Volkova’s country house is really the work of her husband, and Volkova didn’t know anything about her, or the woman’s words are lies.

It is noteworthy that about six months ago, representatives of the Astrakhan UFSB stated that about sixty widows of militants live in the region, as well as “Sharia wives” who can take the path of terrorist activity. What then prevented representatives of the Astrakhan special services from launching a large-scale verification of the personalities and activities of all these women is not clear. But verification is underway now, and the results are already there. In addition to Volkova, special services work with other widows and “wives” of terrorists.

In 2011, one of the young Wahhabis was already detained in Astrakhan. This is Ayna Seydgaliyeva, who as a student at one of the Astrakhan universities, married a man involved in a radical underground gang. In the hands of the FSB officers, there was a photo archive of a girl with very interesting (for operational work) photographs. On many of them, Aina posed with weapons surrounded by militants. 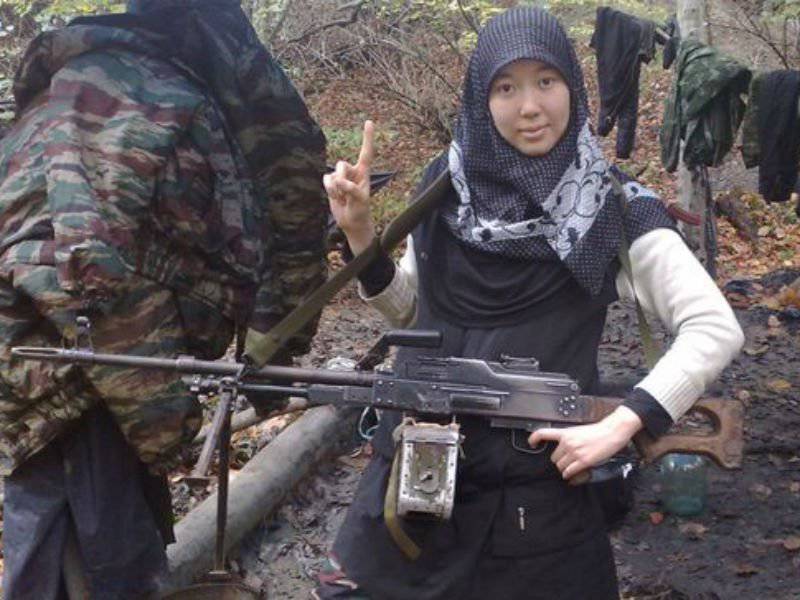 Ainu Seydgaliyeva was convicted on 12,5 years of the colony - during the capture she put up fierce resistance, throwing a grenade at law enforcement officers.

Terrorist activity prompted State Duma deputies to begin developing new bills related to tougher penalties for the terrorists themselves and the introduction of criminal prosecution for their family members. And if the initiative with the abolition of the death penalty moratorium for militants, in fact, failed, since extremists going to die are unlikely to be afraid of the penalty of execution, then new initiatives and already prepared laws can be discussed. In November last year, a law was passed in Russia, according to which relatives of terrorists can recover the damage caused during the terrorist attacks. However, so far, no precedent has been fixed for the application of this law, since recovery of damage through court is possible (by law) only if the relatives of the militant cannot prove the legality of acquiring property or receiving financial resources.

A new idea was received about LDPR deputy Roman Khudyakov, who proposed punishing the relatives of terrorists by confiscating property (including arresting bank accounts) and a ban on leaving Russia. Confiscation, according to Khudyakov, should be carried out regardless of the origin of the property of the terrorist’s relatives. The deputy is sure that this can scare people off on the path of terrorism.

But this project has a significant weakness: if a person embarking on the path of extremism is going to kill civilians, moving away from classical family values, actually trampling down the moral foundations of his family, and the families of others, will he be stopped by the information about his crimes? relatives arrest accounts? Someone may be stopped, but most are unlikely. It is unlikely, because such people (who are more correctly called nonhumans) have their mind clouded with false values ​​- clouded with the help of serious psychological treatment from the “puppeteers”, including, and not without the help of narcotic drugs. Crossing the line, they hardly think about their parents, other family members.

But, by and large, with the right approach to the implementation of the idea may work. For this, a powerful information processing should be carried out - a psychological counter-strike, with which potential fighters (precisely those who are preparing to embark on the path of extremism) and their family members will be “popularly” explained that their steps to extremism (the steps of their close relative to extremism) - This is a frank disregard for family ties and in fact bringing their own families under the hammer of economic and criminal sanctions. That is, a person must realize that if he enters the world of extremism, then he strikes at his own family.

Another thing is how to deal with those people whose son (husband, brother) has long been on the path of terrorist activity, and who have lost contact with them, clearly condemning his actions. There are plenty of them too. In general, the idea is emotional, but it still has a reasonable grain, and in order for it to give the right sprouts, the idea needs to be refined.

Special services officers should wish to continue active work on countering terrorism in all areas: from the destruction of the militants themselves and the identification of potential terrorists in the medium of their communication to the disclosure of the channels of financing extremist activities and structures engaged in the promotion of extremism in Russia and beyond.

Ctrl Enter
Noticed oshЫbku Highlight text and press. Ctrl + Enter
We are
Results of the week. "Calm, only calm!"Situational analysis of the death of the MH17 flight (Malaysian Boeing 777), made on the basis of engineering analysis from 15.08.2014
Military Reviewin Yandex News
Military Reviewin Google News
75 comments
Information
Dear reader, to leave comments on the publication, you must sign in.