France and Saudi Arabia: the Union of "Outcast" 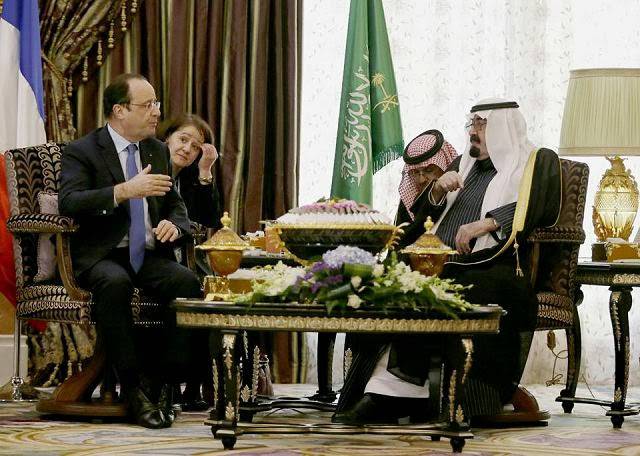 While the international community summed up the results of 2013 for the year, making additional efforts to reduce the risk of armed conflict in the Middle East (especially in Syria, as well as by settling the Iranian nuclear program), the head of the Elysee Palace decided to put a very peculiar point in its political activities in the past year.


He did not follow the path of completing the year with creative actions, in particular, by taking measures to improve the social conditions of life that the people of France have been waiting for from the very elections of this president - a socialist representative, i.e. by definition: a party close to the common people. And the attitude of the country's population towards this president is vividly demonstrated by a BFM-TV-RMC site poll conducted in late December in France, which showed that only 2013% trusts Hollande, while 2% responded with its complete distrust (hence Is it any wonder that with the “democratic principles” declared by Oland in his policy, the results of this poll were banned by the censors of the Elysian Palace).

Francois Hollande made a decision to end 2013 with a trip to Saudi Arabia, thereby consolidating the union of two “outcast” Washington (and not only!) States that clearly did not understand the reason and the meaning of the political accents that occurred at the end of 2013 and did not fit in new realities. The status of "outcast" was not helped by the Elysee Palace and Riyadh, the past active servile readiness to be the first to pave the way to Damascus with the bayonets and chemical provocations, as well as the massive support of the Syrian opposition militants, condoning Wahhabi ideas not only in Eastern countries, but also same france.

According to many political scientists, Hollande today has become the most faithful ally of Saudi Arabia in its attempts to strengthen the so-called "Sunni arc" and in the fight against Shiite Iran and Syria. And in this “activity” Lebanon and Hezbollah play a key role. Currently, both countries are united by a number of foreign policy goals. First of all, this is the tough stance of the two states on the Syrian issue and on the removal of Bashar al-Assad from power. Their views also coincide on the Iranian nuclear problem, in an effort to reduce the influence of Iran in the region. To a certain extent, the support of the Elysian Palace of Riyadh is also explained by the well-known generosity of the royal family of KSA who donated foreign politicians (especially through the head of the Saudi special services, Prince Bandar bin Sultan) with large monetary donations and diamonds for their assistance in distributing Saudi Wahhabism. This is what allows Riyadh to twist like a “tail of a dog” not only in Washington, but also in Paris.

So, 29 and 30 December Hollande, with a view to solving the tasks of the military-industrial national circles that brought him to power, makes an official visit to Saudi Arabia, accompanied by his four leading ministers and more than 30 entrepreneurs.

The main goal of this trip is to consolidate bilateral military-strategic cooperation, conclude contracts for additional armament of the Sunni forces of neighboring Lebanon, leading together with the Syrian opposition a bloody war against the government forces and official authorities of Syria, and develop a business partnership in the field of intelligence.

The result of the trip is the agreement of Saudi Arabia to allocate 3 billion dollars for the purchase of French weapons intended for the Lebanese army. It is noteworthy that this financial "help" is twice the total military budget of Lebanon, which, like Syria in the past, was a French colony. However, such military assistance to Beirut from Riyadh and the Elysée Palace, aimed primarily at fighting Lebanese Hezbollah, will not help to reduce regional tensions, and the authority of these “sponsors” within Lebanon and in the Middle East as a whole. And the point is not only that Hezbollah is on the side of the common enemy of Paris and Riyadh - President B. Assad. This deal will lead to even greater intensification of the interfaith struggle between the Sunnis and Shiites, to the additional militarization of the region with the French weapons on saudi money. With his generous “gift” of the Lebanese army, Riyadh hopes not only to actively use it against his main adversary, Hezbollah, but also to provide even greater influence on Lebanese society and the current government of this country, spreading the ideas of Wahhabism in Lebanon, which has not yet recovered from the 15-year civil war. After all, today in the Sunni regions of Lebanon - in the largest cities of this state: in Tripoli and Sayda - Islamist rhetoric is on the rise, and it is in these cities that Al-Qaida is gaining followers, the Lebanese daily Al-Akbar writes.

However, in addition to this deal, the leaders of France and Saudi Arabia discussed other areas of bilateral military cooperation, clearly designed not to manage peaceful affairs, but to actively prepare for a regional war. This is, above all, a contract for 4 billion euros for the modernization of the French land-to-air Crotale missiles with the participation of the French company Thales. Negotiations on this issue were blocked for a long time due to the lack of agreement on the part of the Saudi elite, but this visit to KSA was a new impetus for such cooperation, especially since the main competitors of the French industrialists in this matter - the United States - have recently cooled somewhat towards the Saudis

Another equally important point in the discussions was the cooperation of the intelligence services of the two countries and the exchange of “mutually interesting intelligence information”, the sale of Riyadh a French spy satellite of the same type that Astrium and Thales Alenia Space sold to the United Arab Emirates last summer. With its use, Saudi Arabia will be able to significantly improve the “effectiveness” of its intelligence services in the future and monitor the activities of enemy forces in the region. French shipbuilders and machine builders (DCNS, Thales and MBDA) received an order to strengthen the underwater fleet kingdoms, the modernization of the frigates of the Saudi Navy, which, along with the KSA petrodollars, would protect and promote Wahhabi values.

France also received a contract to equip the Kingdom’s National Guard, negotiations are underway on Paris’s participation in the Saudi 16 nuclear reactor project in the coming years, in equipping Saoudia with Airbus passenger liners.

As noted in Riyadh Hollande, the Saudi kingdom became “France’s leading partner in the Middle East” with a turnover of 8 billion euros in 2013, of which 3 billion are French exports. The results of the agreements reached during this visit may bring to the French military-industrial circles, according to separate estimates, about 250 billion euros over the next 7-10 years.

However, according to a number of foreign experts, significant deliveries of French weapons to Lebanon at the expense of the Saudi royal family are the direct intervention of Paris and Riyadh in the internal affairs of this state, despite the public declaration of Hollande and his foreign minister, Fabius, stability and security. " The actions of Saudi Arabia are aimed at further stirring up the fire of conflict in a region that has already embraced Iraq, Syria, and is now being transferred to Lebanon.

Meanwhile, Damascus believes that if regional and western states stop providing financial and military assistance to the armed opposition and terrorist groups operating in Syria and border states, then the violence in the region and, especially, in this country will cease, which will create conditions for successful international conference "Geneva-2", said the Syrian Ambassador to Russia Riad Haddad.