Why is it advantageous for Russia to defend Mongolia? 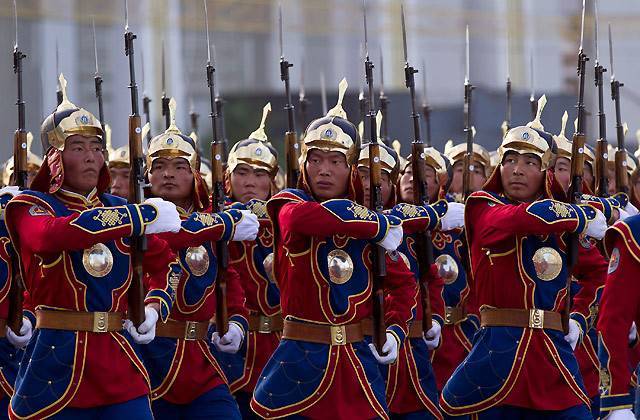 Without supporting the strategic ally, the Russian Federation can receive from Beijing a geopolitical "mate"


Mongolia in its current form gained independence from China solely thanks to Russia. More precisely, Mongolia separated itself in 1911, taking advantage of the chaos of the Xinhai Revolution, but was able to keep it only through the support of the Russian Empire, and then the USSR, which achieved official recognition of Mongolia's independence from Beijing. The attitude of the PRC to this fact is now traditional for this, in particular, country: it recognizes previously concluded treaties until there is an opportunity to break them. In all Chinese historical publications say that Mongolia gained independence illegally, and the USSR "knocked out" the recognition of this independence, taking advantage of China's weakness.

This is the official non-alternative position, which means that as soon as Beijing has a chance, Mongolia will immediately say goodbye to independence. With a huge territory (about 1,56 million sq. Km, 18-th place in the world) with a very small population (about 2,9 million people, 140-th place in the world), this country does not have the ability to protect themselves from Chinese aggression. Prevents this aggression only Russia by the fact of its existence.

In the post-Soviet period, Mongolia actively developed relations with the West, and most of its armed forces went through various UN peacekeeping operations, where Mongolian soldiers and officers showed themselves well. However, this does not provide them with the opportunity to oppose the Chinese Army (PLA), and the West cannot be the guarantor of the independence of Mongolia. Firstly, for purely geographical reasons: Mongolia is landlocked and borders only with Russia and China. Accordingly, for foreign troops to be on the territory of Mongolia, Russia needs at least the consent of Russia. Despite the “holes” in the Russian air defense in the Far East, “without prior arrangement” through its airspace even the Americans will not risk flying. Secondly, what is much more important, even the Americans, not to mention the Europeans and the Japanese, under no circumstances will go to war with China in order to save Mongolia.

In recent years, in Ulan Bator, it is likely that this has begun to be understood. Meanwhile, Moscow finally remembered the existence of Mongolia, where only recently the entire population knew Russian. And I decided to give the country at least some attention, including in the military sphere, at least slightly updating the hopelessly outdated equipment of the Mongolian army.

Today, the Mongolian ground forces have a motorized rifle brigade, a construction regiment, a peacekeeping battalion (another one will be formed), a special forces battalion, and up to six regiments of incomplete readiness.

Almost all the equipment of the ground forces is very outdated, a significant part of it is no longer capable, therefore, the above figures are largely conditional. Some exceptions are the T-72A tanks, as well as the BTR-70 and BTR-80 tanks, delivered in recent years from the Armed Forces. This technique is also not known in any way, but it is nevertheless qualitatively better than previously available, moreover, it is much less physically worn out.

The Mongolian air force does not currently have combat aircraft. Previously, the 12 MiG-21PFM and 2 MiG-21UM were in service and have been deposited and, apparently, will be sold for parts (most likely, to the DPRK). There are only transport planes - two An-24 (two more in storage), three An-26. Accordingly, the entire strike power of the Mongolian air force is eleven combat helicopters Mi-24. In addition, transport helicopters are in service - eleven Mi-8, three Mi-17.

About the technology of the Air Force, you can say the same thing as about the equipment of the ground forces. The exception is the division of the upgraded C-125M SAM systems received from Russia two years ago. By itself, C-125 - the system is not new, but upgrading it significantly improved. The possibility of Mongolia’s purchase of several MiG-29 fighters from the Air Force of the Russian Federation is being discussed.

It is significant that, despite participating in the Afghan and Iraqi campaigns, Mongolia did not acquire any American weapons, only a certain amount of equipment and equipment. Mongol weapons are still on 100% Russian. And conditionally, new equipment has been acquired recently in Russia. Since 2008, the annual joint Russian-Mongolian military exercises have been resumed, which take place alternately in Mongolia and in the Russian Buryatia ethnically related to it.

The fact that the only real guarantor of Mongolia’s independence is Russia does not mean that Mongolia needs the Russian Federation more than Russia needs Mongolia. The huge state occupies the most important strategic position between Russia and China. In the event of war between the last two countries, the one that will control the territory of Mongolia will benefit. That is why relations with it are critically important for both parties, especially for the one that is weaker (that is, for Russia). The preservation of neutrality by Mongolia in the event of such a war seems completely unrealistic.

In general, there are two countries that Russia is beneficial in case of something to defend against China as well as itself, this is Kazakhstan and Mongolia. By "surrendering" them, the Russian Federation will receive from Beijing a geopolitical "mate" and automatically lose the territory east of the Urals.

Ctrl Enter
Noticed oshЫbku Highlight text and press. Ctrl + Enter
We are
About Stalin and KhrushchevHow can Russia survive and win in the 21st century?
Military Reviewin Yandex News
Military Reviewin Google News
141 comment
Information
Dear reader, to leave comments on the publication, you must sign in.