Destroyed by “perestroika”, but unbreakable in consciousness 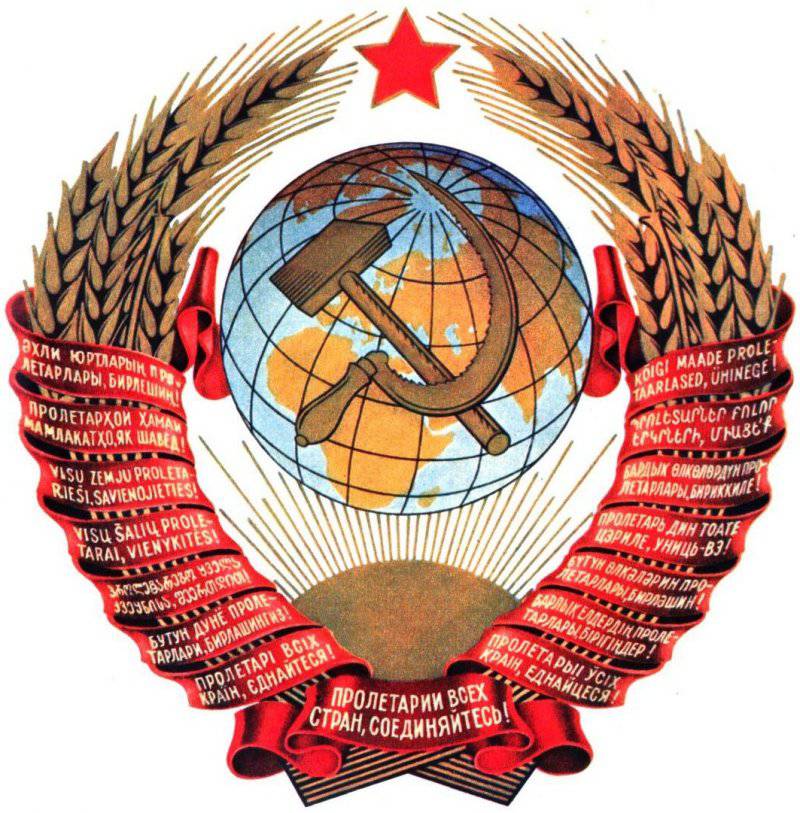 There is no doubt that the USSR is the greatest power. The power whose army was most powerful in stories of humanity, the power, whose people for a couple of years after World War II was able to return the former state of the economy, demography and army. But even to the walls of the USSR (“iron curtain”), which were considered to be impenetrable, it turns out, you can start up a “Trojan horse” ...

What can be noted about the achievements of the Soviet people? Very much: the most powerful army the world has ever seen; industry, which in terms of production volume exceeded all industries of the world; a fleet that has no equal; the most powerful aviationcapable of erasing an entire state from the face of the earth in a matter of hours; space industry, which knew no equal; internationalism is the friendship of peoples that helped create this great state; the educational system, which every year gave millions of graduates ... And this is only a small part of its greatness.

However, as I said earlier, even the walls of the USSR could have launched a “Trojan horse.” And it just so happened that this horse turned out to be traitors among their own people: people who betrayed their own country, their own people for money. People who have doomed millions of people to starvation, and, oddly enough, some of these people are still continuing their activities.

By the time Gorbachev came to power, the country really needed to be reformed. The people waited and wanted reforms, and now Gorbachev with his speeches, which were filled with promises and examples, called for these changes. Everyone knows what happened next: the people were raised for reforms, but for what kind of reforms? On education reform? On army reform? On economic reform? Gorbachev did not know what reforms the country needed. Convulsive attempts began to start at least some of the actions, but all of their reforms gave a small result, or it became worse. All reforms stopped by inertia. An example would be the fight against drug addiction. In fact, the destruction of the alcohol industry was the destruction of one of the most profitable items in the national economy. However, by that time there were few drug addicts in the country, why start such a terrible war with alcoholic beverages? Hardly for the health of a nation that was completely healthy. But the war began, shops with alcohol were closed - so what? Huge queues for alcoholic drinks and a huge shortage of funds in the national budget. It is worth noting that the real addiction began after this struggle.

Then the so-called market economy, and again - what is the result? Attempts to repeat the Chinese experience of transition to a market economy led to failure. In China, this economy has grown at least one generation, had experience. In the USSR, not only was there no experience, they also began to do it at such a fast pace. State-owned enterprises began to sell right and left for pennies, and what is the result? The huge decline in production, and besides, the loss of jobs. Economic reforms failed.

Then the clashes between the nations began. Internationalism, on which more than one generation has grown, has cracked. The separatists, who stuck their heads out, began to find supporters for themselves, in fact, they didn’t have to look. Inter-ethnic clashes began, which in a matter of days and months turned into wars between the republics. The center was silent. The center had an army and the Ministry of Internal Affairs to stop this slaughter, but they were silent. The massacre (you would not call it otherwise) claimed the lives of hundreds of thousands of people.

At the same time began to destroy the past of the people and the state. Joseph Vissarionovich Dzhugashvili (Stalin), the man who made the dying country the second economy of the world, returned to it its former greatness, has now become the greatest tyrant and despot. The international psychology among the people's consciousness was destroyed, although not completely, but internationalism could no longer become a support for the preservation of the USSR.

Then went to the army. USSR Armed Forces - Red Army. The most powerful, battle-worthy, and best-trained army proved to be unnecessary. Talk of a mercenary, contract or professional army began. How was this army imperfect? Yes, nothing. Yes, reforms were needed, but the contract army was not needed. The beginning of the collapse of the army, and no one could stop it, in principle they could, but those who could not have been. For a couple of years, the very powerful army in the world was razed to the ground.

Everything, now nothing is needed. The economy is on its knees, internationalism as it may be, the past is changed. Everything! It remained only to destroy the country, which is no longer holding onto anything. And it was easy. 8 December 1991 was signed by the Bialowieza Agreement, which was the death sentence for the USSR.

However, the dreams of independent, prosperous and free republics quickly collapsed. The Baltic countries were in a crisis, and they could not get out of it. For the countries of the Caucasus, the situation was better. Despite the wars, Armenia and Azerbaijan managed to rise from their knees. Georgia, despite the coup and the war with Russia, leaves much to be desired in economic terms. Kazakhstan, thanks to its large resource potential, was able to find the right way out of the crisis and even build a new capital. The countries of Central Asia were in the worst condition: economic and political crises, as well as civil wars brought them to their knees. Of course, the standard of living quickly dropped (to put it mildly), and in addition, terrifying unemployment seriously lowered the potential of the countries of Central Asia. Ukraine, despite its resource, industrial and economic potential, could not avoid a crisis. However, she was able to begin the path to "salvation": debts, dying industry, a ruined army - all this is the result of self-destructive decisions of the Ukrainian government. However, it is not for us to judge their decisions. But the military-industrial complex, agriculture on the way to the best. And this is a very good direction. Ukrainian military industrial complex fulfills orders at the world level and develops. Agriculture has good alternatives for development. Belarus has good development prospects; thanks to trade relations with Russia and Kazakhstan, the country's economy is developing.

What about Russia? She got the most. The rapid decline and crisis of the economy, the destruction of the army, the demographic crisis brought the country to its knees. It should be noted that the reforms did not lead to good, at least in the short term, and in the long term, we should also see ... The situation changed at the beginning of 2000's. Due to the increase in oil prices, Russia managed to pay off debts and start raising the economy. Military reforms began, raising pensions and salaries. In 2013, Russia became the fifth economy in the world. But even this did not help solve all the problems: corruption, economic slowdown, poverty. The demographic crisis could also be noted, but in 2013, the first positive growth in 20 years was noted, albeit minimal.

The coming 2014 year promises to be “not boring” for all CIS countries. It is hoped that this year the leaders of the countries will make the right decisions that will benefit the states (although it’s probably very naive to believe in it). However, 20 years of crisis, problems, and sometimes civil wars had to give a cruel lesson to the leadership of the countries. Despite the death of the USSR, its legacy still lives: industry, infrastructure, the military-industrial complex, the army and navy, education, a common past. All this still lives in the minds of those lucky enough to live at this time. Even if many did not like it.

Ctrl Enter
Noticed oshЫbku Highlight text and press. Ctrl + Enter
We are
What you didn't want to know about EnglandList of destroyed the largest and most high-tech enterprises
Military Reviewin Yandex News
Military Reviewin Google News
190 comments
Information
Dear reader, to leave comments on the publication, you must sign in.