Lebanon will receive the largest weapons tranche in its history 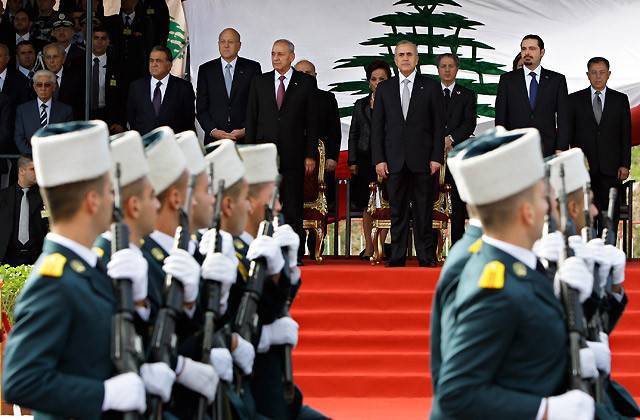 Saudi Arabia will allocate $ 3 billion to the Lebanese army for the purchase of weapons in France. This was announced by the President of Lebanon, General Michel Suleiman during a televised address to the nation, reports "BBC". According to Suleiman, this is the largest foreign aid for all history country.


“We are extremely grateful for this generous gift of $ 3 billion proposed by the king of brotherly Saudi Arabia to strengthen our army. We use it to purchase more modern and new types. weapons the French, ”said Suleiman.

France is ready to consider any applications from the Lebanese side for the purchase of weapons, French President Francois Hollande said on December 29 during an official visit to Saudi Arabia. “I am in contact with President Suleiman. As soon as the requests (of the Lebanese army — RP) are known, we are ready to provide them, ”Hollande added.

According to SIPRI, the entire defense budget of Lebanon for 2012 a year is $ 1,7 billion. About $ 1 billion is US military assistance provided to the country since 2006. The tranche of the kingdom of Saudi Arabia exceeds not only these amounts, but also the assistance rendered by the Saudis to the Syrian rebels,

writes the Wall Street Journal. Detachments of the opposition fighting in Syria, received from the kingdom of weapons and equipment for only $ 400 million, the newspaper notes.

Saudi Arabia’s financial assistance will help Lebanon confront the threats of inter-religious conflict, extremism and terrorism, as well as combat illegal arms smuggling, Suleiman said during his speech. It went on air several hours after the funeral of former Finance Minister Mohammed Shatah, who was known as a consistent critic of the regime of Syrian President Bashar Assad and the Lebanese Shiite movement Hezbollah. 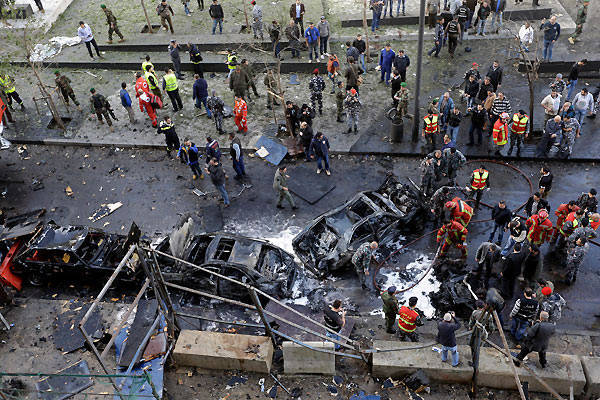 The consequences of the explosion of the car of Mohammed Shatah. Photo: Hussein Malla / AP

The 62-year-old minister was killed on Friday by a car bomb. Besides him, four more people were killed and more than 70 people were injured. Shatah was one of the leading members of the pro-Western 14 Alliance March, headed by Saad Hariri, the son of former Lebanese prime minister and one of the informal leaders of Lebanese Sunni Muslims, Rafik Hariri. Hariri Sr. was also the victim of the terrorist attack - in February 2005, a bomb 1800 kg of TNT was blown up on the way of his motorcade. More 22 people died, including bodyguards and friends of the former prime minister.

Supporters of the murdered politicians in both cases were accused of organizing terrorist acts of Shiite militants. During Shatah’s funeral, hundreds of black-clad Sunnis shouted slogans against Hezbollah. "The explosion was another heinous crime in a series of crimes aimed at sabotaging countries," representatives of the movement, who denied involvement in the attack, reported earlier. Ex-Minister of Finance buried in the mausoleum of Rafik Hariri, built near the central mosque on Martyrs' Square. He became the ninth prominent critic of the Assad regime, killed in Lebanon over the past eight years.

The money of Saudi Arabia is necessary and will help to make "a decisive step towards the transition to a real state, whose power is higher than any other government in the country and whose army surpasses any other forces," reports Agence France-Presse Saad Hariri.

The conflict in Syria is becoming more like a war by proxy, where Iran is behind the Syrian authorities, and the opposition is supported by their sponsors from the Arab countries of the Persian Gulf, the Guardian said. This conflict may spill over into neighboring Lebanon, where Iran has a powerful ally in Hezbollah, and many Sunnis are counting on the help of their co-religionists from Saudi Arabia.

In November, two suicide bombers blew themselves up at the Iranian embassy in Beirut, killing 25 people and injuring 146. The attack was organized by the Saudis against the residency of the Iranian Islamic Revolutionary Guard Corps, which was entrenched in the embassy, ​​Yevgeny Satanovsky, director of the Middle East Institute, told Russian Planet.

“Now the head of Saudi Arabian foreign intelligence, Prince Bandar bin Sultan personally took control over the overthrow of Assad during the civil war. It conducts its activities in two main areas: the formation of army brigades for actions against the Shiites and their allies in Yemen and Syria and the sabotage and terrorist war against the Iranians, ”he says.

Grant to Lebanon to buy weapons - another episode in the struggle of Iran and the Saudis for influence in the Arab East, adds Satanovsky

“They will buy someone, they will blow someone up, they could not buy us - Volgograd was blown up, in Lebanon it is even easier, they are more accustomed to it. Who will win is unclear. Germany was much richer than the Soviet Union, but the war ended in Berlin, ”says the expert.