England vs Russia. Organization of the February Revolution

December 30 2013
42
The First World War, as predicted by Russian right-wing figures, became a catalyst for the destruction of the Russian Empire. Actually, this war was organized to destroy the monarchical empire, where the power belonged to the aristocracy, which, although gradually eroded, but still was a barrier to the victory of the merchants living on the principle of "everything is bought and sold." The Russian, German, Austro-Hungarian and Ottoman empires were to be the victims of predatory businessmen from the "financial international", which was mainly concentrated in France, Great Britain and the USA.


Especially these predators, or rather parasites, dreamed of seizing upon the riches of Russia. The Russian Empire was the main prize of a big war. On the ruins of the old empires they planned to build a new world order. World War I was a deadly trap for Russia. Already in 1916, in London and Paris, the question arose of what to do with Russia. It was believed that Germany, due to lack of resources and food, the growth of protest attitudes in society, would soon capitulate. Russia also showed good results in the war: its economy continued to grow even under wartime conditions, although all other warring powers experienced a decline in production (not counting the United States, which entered the war at its very end, and used the resources of the warring countries before); the Russian army and navy became stronger by the year 1917 than in the year 1914. The situation has become dangerous. In case of victory over Germany, I would have to share with Russia, give her part of the Polish lands of Germany, Galicia, which belonged to Austria-Hungary, the Bosphorus and Dardanelles, Constantinople. In addition, Russia would receive Western Armenia by strengthening its position in Anatolia. All this seriously strengthened the strategic position of Russia in Eastern and Southeastern Europe, in the Mediterranean. Russia turned the Black Sea into a “Russian lake”, having completely secured its borders in the Black Sea direction.

All this strengthened the world role of the Russian Empire. Western experts predicted that if the trends of Russia's rapid economic development and the gradual loss of the role of Western Europe remain, then by the middle of the century the Russian Empire will dominate the planet not only militarily but also economically. And this is taking into account its demographic power - in terms of population, the Russian Empire was second only to China and India, and its population continued to grow rapidly.

In the event of the collapse of Germany, the West would have to pay the bills for the help of a Russian soldier. In the West, another scenario was not ruled out. Once in a critical position, the German Kaiser of surrender in the west might prefer a separate peace in the east. There were chances for such an agreement. Germany has long been connected with Russia by hundreds of related threads. Yielding to the Western powers, Berlin would have to give up the colonies, Alsace, Lorraine, possibly the Ruhr, to abandon the ocean development program fleet, greatly reduce the army, pay indemnity. And having agreed with Russia, one could hope that Petersburg would be satisfied with concessions from Austria-Hungary and the Ottoman Empire. Russia had no particular complaints against the Germans.

Therefore, the politicians of Britain and France, and the “financial international” behind them, decided that the best option for them was the elimination of autocracy in Russia and the establishment of a “democratic” republic. Fortunately, the Russian monarch did not seem to be a man capable of “iron and blood” to preserve an absolute monarchy and empire. All the conditions for the implementation of such a plan have already been. Russian society was dissatisfied with the war, it was torn by strong, fundamental contradictions. There was a powerful “fifth column” —from high-ranking freemasons, including representatives of the Romanov dynasty, aristocratic families, ministers and politicians to nationalists, separatists and socialist revolutionaries. The central government showed weakness and indecision. There was no effective security service capable of identifying and neutralizing various groups of conspirators.

Most of the “democratic” leaders in Russia who were supposed to transfer power were “brothers” around the boxes to the same Western politicians and public figures and businessmen, or were under their influence. On the one hand, the “democratic” Russia was to bring the war with Germany to a victorious end, to remain loyal to the allies in the Entente. On the other hand, the “democratic” coup had to destabilize Russia in such a way that it could not take advantage of the fruits of the victory and eventually lost its national borders - the Caucasus, Central Asia, Ukraine, Poland, the Baltic States and Finland. Yes, and the new Russia itself was to pass under the control of the “world community”.

Since the beginning of 1916, the British ambassador to Russia, George William Buchanan, and the French ambassador, George Maurice Palaeologus, have developed good relations with dignitaries, with Russian liberal parties, in particular with the Cadets and Octobrists. Buchanan supported the ideas expressed by liberals to establish a constitutional monarchy in Russia. Moreover, foreign ambassadors established contacts with all the major groups of future “fevralists” —the aristocratic-grand-prince, general, and liberal-masonic. Ambassadors conducted negotiations in grand salons and secret meetings. Many conspirators openly visited embassies. The regime in the country, even in conditions of war, was very liberal. A state security service capable of crossing such processes did not exist. 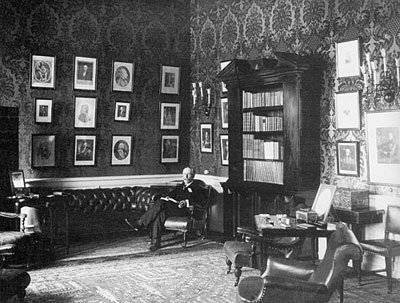 In some cases, the arrogance of ambassadors reached such an extent that they openly put pressure on the government. In 1916, Ambassador Buchanan put the question of the creation of a "ministry of trust" before Emperor Nicholas II. At the end of May 1916, Buchanan specially visited Moscow to award the highest British order of Moscow Mayor M. V. Chelnokov. Head Chelnokov became a British peer. It should also be noted that he was at the same time the chief authorized officer of the All-Russian City Union and the “brother” of a high degree of dedication. In the same year, 1916, Chelnokov, justifying his last name, began to regularly attend Headquarters, conducting negotiations with Alekseev and other generals.

Thanks to the acquaintance with the grand dukes, generals and Duma leaders, Buchanan and Paleolog received secret information about the military operations of the Russian army, its condition, plans, possible personnel shifts in the highest echelons of power, statements of the emperor and empress in narrow circles. In fact, English and French ambassadors acted as residents of hostile states, and as organizers of a coup d'état. In their presence, negotiations were conducted on coup scenarios, and the ambassadors of the Allied powers, did not interrupt the interlocutors, did not force them to abandon their anti-state activities, and did not inform the emperor.

Princess Olga Paley, the wife of Grand Duke Pavel Alexandrovich, who was one of the most active conspirators in the grand duke's group, recalled in emigration that the British Embassy, ​​on instructions from Prime Minister Lloyd George, became a "hotbed of propaganda." He was constantly visited by such well-known liberal figures and future leaders of the Provisional Government, like Prince Lvov, Milyukov, Rodzyanko, Maklakov, Guchkov and others.

Some rumors about the activities of ambassadors reached the Security Department of the Ministry of Internal Affairs, which informed the emperor about this. According to Anna Vyrubova, the emperor talked about the active participation of the British ambassador in intrigues against the autocratic power, that the embassy almost held meetings with the grand dukes. Nicholas II wanted to send a telegram to the English monarch with a request to ban the British ambassador from interfering in Russia's domestic policy, seeing in this British desire to cause a revolution in the Russian Empire and weaken it by the time of the peace talks. The emperor was not going to ask for the recall of Buchanan. “This is too harsh,” said Nikolai. Thus, the Russian supreme power had some information about the conspiracy and could harshly stop the activities of the conspirators, but did not. Nikolai considered such actions “sharp”, “inconvenient”. In general, it is possible to understand Nikolai Alexandrovich, in order to prevent a coup, he had to “clean out” a significant part of the house of the Romanovs and the Russian elite. He didn’t have enough spirit for that.

Thus, a significant part of the imperial "elite" —the representatives of the Romanov family, the top generals, Duma leaders, representatives of urban and industrial bourgeois organizations, industrialists, bankers and lawyers — rallied against the emperor and autocratic Russia. These disparate forces were coordinated by the British and French embassies, as well as by the Masonic lodges. Therefore, the thesis that "the Bolsheviks destroyed the Russian Empire," is erroneous and deceitful. The Bolsheviks are simply trying to shift the responsibility for the destruction of the empire. It was destroyed by its degenerated old elite, who betrayed “old Russia”. Naturally, many justified their actions with good wishes. Like, they wanted to build a “new, democratic Russia” free from the “shackles of autocracy”. We have heard it before. We wanted the best, but it turned out - as always. Destroyers can not create!

The British played a fatal role in the fate of the last Russian emperor and his family, not only when they took an active part in the destruction of the Russian empire, but without giving them the opportunity to go to England. The royal family was originally under house arrest at the imperial residence of the Alexander Palace in Tsarskoye Selo. 4 March 1917, Nikolai Alexandrovich addressed the Chairman of the Provisional Government, Prince Lvov, with a request to allow him and his family to go to the UK. Three days later, the Provisional Government announced that it was ready to ship the Romanovs to Romanov (Murmansk), and from there to England. Russian Foreign Minister Pavel Milyukov met with British Ambassador Buchanan. The parties discussed the possibility of Nikolai Aleksandrovich’s departure to Britain and came to an agreement.

The version that revolutionary soldiers and sailors prevented the departure of the Romanov family is untenable. In the spring of 1917, the influence of the Bolsheviks on the masses was still insignificant. The Provisional Government still had considerable authority and military capabilities, and liberal speakers were popular. In the very Murmansk there were British warships, which, if necessary, could provide sufficient convoy for Nicholas and his family. There were no problems with taking the Romanov family out of Russia.

British Prime Minister David Lloyd George, although he was not a royalist and did not sympathize with the Russian emperor, gave a positive response to the offer to take the Romanovs to England. He viewed the tsar as an additional trump card for influencing the Provisional Government in Russia. The British Prime Minister believed that he would be supported in Buckingham Palace. After all, the British monarchs were relatives of the Romanovs. However, he was wrong. The British monarch actually refused to accept the Romanovs. First, George V "not found" free space. In addition, the king expressed doubts about the expediency of a relative's visit to London, stating the possibility of dissatisfaction in society, activating the revolutionary movement in England. As a result, the king proposed to explore the possibility of the departure of the Romanov family to France. Thus, having refused entry to Nikolai Aleksandrovich, King George V signed the death sentence to him and his family. 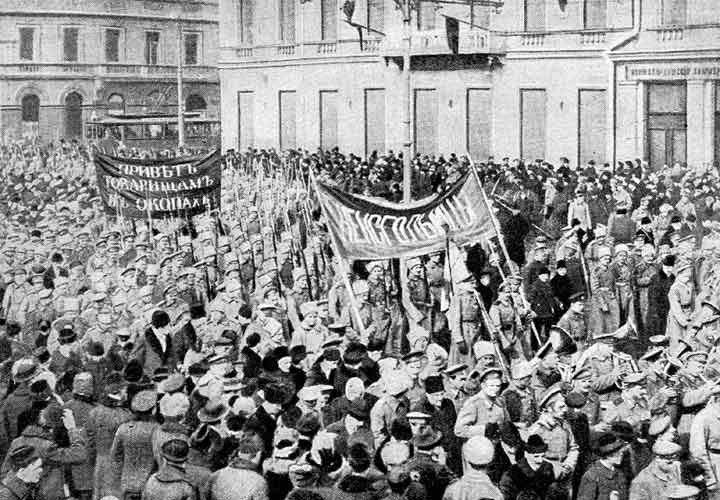 Ctrl Enter
Noticed oshЫbku Highlight text and press. Ctrl + Enter
We are
The development of the military-industrial complex of the Russian Empire in the years of WWIAustria-Hungary in the war: 1916 and 1917 campaigns. Deterioration of the empire
Military Reviewin Yandex News
Military Reviewin Google News
42 comments
Information
Dear reader, to leave comments on the publication, you must sign in.