Syria: a thousand days of war. Events in the country are on the rise 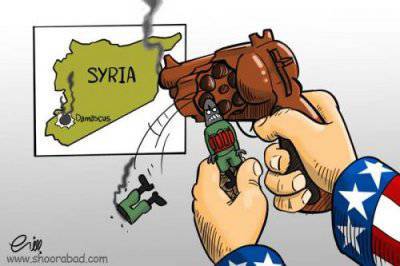 In December, a thousand days have passed since the beginning of the events in Syria. In the days of this bloody and tragic "anniversary", former head of US intelligence, General Michael Hagen, said that the bloody massacre in Syria poses a serious threat to regional security. So serious that the victory of the government of Bashar al-Assad could be the best possible consequences of the Syrian conflict.


Washington received the sight? Nothing like this. The development of the civil war in Syria and the intervention of “internationalist jihadists” are on the rise. Yes, the “Syrian issue” in the media has faded into the background, but - not because the conflict is fading. Nothing is complete in Syria, there is not just a long way to a peaceful settlement, this peaceful settlement is becoming an increasingly elusive perspective.

Of course, the blitzkrieg, which put the anti-government forces and anti-Syrian coalition, the calculation of the fact that the militants in the American bombing barrage will be included in Damascus failed. Russian diplomacy managed to knock out of the hands of the anti-Syrian coalition trump card: the ability to manipulate information with chemical arsenals Bashar al-Assad.

But now, on the eve of 22 in January, on the eve of the international conference on Syria in Montreux, the anti-Syrian coalition carried out permutations in its own ranks and in the ranks of the opposition. The Islamic Front was created from six radical groups. A strange thing happened история with the seizure of the front of the warehouses of the "Free Syrian Army" - PAS. All this suggests that neither the militants nor the main players of the anti-Syrian coalition — the United States, the Persian Gulf monarchies and “international jihad”, the bastard generation of the American-Arab Union, first against the USSR, and now against Russia, Iran and China — no peace process not configured.

The more successful today are the government forces against the militants, the attacks become more sophisticated insurgency. Their tactics are changing.

If earlier the main task was quantitative indicators, that is, the area of ​​the territories over which the rebels sought to establish control, now the main thing is “quality”, a blow to the objects that provide the vital activity of the country.

The fierce fighting that unfolded in the area of ​​the city of Adra is characterized by the fact that the militants who took hostages of local residents use them as a “human shield”, not allowing army units to use firepower in full. Familiar picture for the Russian reader, is not it? Therefore, I will not specify the details ...

Having captured Adra in the middle of December, the militants of “Jabhat en-Nusra” massacred there, destroying people from the Alawite community and the family of civil servants “at the root”, sparing neither women nor children. "Fighters against tyranny and dictatorship" filled the city with blood. And at the same time - they fired at the oil storage facility located in the nearby industrial zone. The choice of purpose is quite clear: Adra receives fuel from Homs pipeline, which is used for urban power plants. “In the case of the ignition of neighboring storage tanks, the situation will become catastrophic,” acknowledges Syrian Oil Minister Suleiman al-Abbas. In addition, over the past two days, government forces repulsed two attacks on chemical weaponsintended for destruction outside the country.

Having failed to win direct clashes with government troops, the militants are doing everything now to destroy the country's economic potential as much as possible, to thwart the agreements reached on the elimination of chemical weapons. The maximum task for the militants of all stripes is still the overthrow of Bashar al-Assad. The minimum task is a permanent sluggish conflict of the Lebanese type, or, as a more recent example, of the Libyan one, that is, the actual split of the Syrian Arab Republic into several conflicting zones.

The implementation of these tasks requires a new level of coordination of anti-government forces. Therefore, external players, first of all, the Saudis, gave the go-ahead to the displacement of the Free Syrian Army from the leading positions. The leadership of this “army” did not fulfill its obligations to consolidate the rebels, which it assumed to the anti-Syrian coalition, and therefore it was treated like this with every waste material. The head of the "General Staff" SSA Salim Idriss fled. According to some sources - to Turkey, according to others - to Qatar, and the property of the SSA was seized by the Islamic Front created in late November.

Today, it is the “front” that has absorbed six major opposition groups, funded by Saudi Arabia and numbering about fifty thousand “bayonets”, is the main striking force of the international anti-Syrian coalition. Like the coalition, it is also “international”, more than a third of the personnel of the “front-line soldiers” come from other Muslim countries, Europe, Afghanistan and post-Soviet Central Asia, the Russian North Caucasus. All in all, in the ranks of the Sunni factions, most of which are associated with Al-Qaeda, are citizens of 70 countries.

The current, somewhat cool attitude of official Washington towards the Islamic Front should not create any illusions that the Americans will refuse to cooperate with it for "ideological" reasons.

Of course, on the one hand, the front leadership directly and “politically incorrectly” declares that its goal is “to create an Islamic state on the territory of the former Syrian Arab Republic, under whose protection the rest of the national and religious minorities will be protected”. But, on the other hand, the rest of the world is comforting from Washington, the Islamic Front does not explicitly declare its support for Al-Qaida, and limits its “jihadist rhetoric” only to the territory of Syria. Consequently, according to American logic, we are talking about "moderate Islamists", to negotiate with them - in the name of the struggle for peace in Syria to the last Syrian ... - both possible and necessary.

Moreover, there is a respectable excuse for contact - the seizure of the “front” of the warehouses of the “Free Syrian Army”, which the Americans have been diligently filling lately.

With these warehouses turned embarrassing. Around the middle of 2013, the United States, on the one hand, did not particularly deny that they were feeding the rebels, but on the other hand they constantly emphasized that the Western assistance of the same SSA was “non-lethal” in nature. That is, the subject of supply is food, communications, computers and cars. The list of the fact that the Islamic Front actually captured in these warehouses, convicts Americans, to put it mildly, in slyness: two thousand AK-47, one thousand automatic weapons of other systems, anti-tank and rocket launchers, heavy machine guns of 14,5 mm, hundreds tons of ammunition and hundreds of military off-road vehicles.

Representative of the US State Department Marie Harf said that the Americans had already met with representatives of the Islamic Front about their “non-lethal property”, and they even promised to “return the weapons stolen from the SSA”. But to whom, if “the Free Syrian Army” practically ceased to exist as a command structure of the insurrection? The conclusion here is obvious: in the near future, the West will declare the Islamic Front "successor" of the SSA. And the leaders of the “front” will make a statement that “Western democracy” is not exactly what Syria needs, which is not entirely good, but Bashar Asad is even worse. Propriety will be respected, even the addresses in the waybills of weapons convoys will not have to be changed ...

At the international level, the “struggle for Syria” is no less dramatic.

While the “National Coalition of Syrian Opposition and Revolutionary Forces” has not yet agreed on a single delegation at the talks, the anti-Syrian coalition, the controlling stake in which belongs to the part of the American establishment and the Saudis, is still functioning smoothly. Riyadh has enough funds to support the extremists of the Islamic State of Iraq and the Levant, the Islamic Front and An-Nusrah. The main task of the dynasty today is to prevent Tehran from coming to a Syrian settlement. Along the way - to ensure the isolation of the Shiite armed forces on the side of Bashar Assad from the Lebanese Hezbollah, the Abu al-Fadl al-Abbas regiment and parts of the Quds brigade, part of the Iranian Revolutionary Guard Corps.

Well, Washington is trying to block the initiatives of Russia, Iran, Syria and China in the UN. As a result, for example, the Secretary-General of the United Nations, Ban Ki-moon, frankly ignores the appeals of Damascus about the penetration of terrorists from other countries into Syria. UAR Permanent Representative to the UN, Bashar Jaafari, said that since March 2011, 259 letters had been sent to the Secretary-General and the Chairman of the UN Security Council on this issue. And each letter attached lists with the names of terrorists and even copies of their passports. In response - silence.

Ban Ki-moon is obviously busy with more important issues of a Syrian settlement. For example, reads the speeches of the UN High Commissioner for Human Rights Navi Pillay. Which quite openly declares “the presence of impressive and irrefutable evidence that the administration of Bashar al-Assad is responsible for war crimes in the country”.

The statement is far from accidental, and is the result of not just "the struggle for human rights." She represents Bashar al-Assad to the international community as a “war criminal”, but what can you negotiate with? Only about his capitulation and voluntary appearance at a meeting of the international tribunal. Given the current capabilities of the media - just gorgeous "Nuremberg" you can roll. Well, the ground for coming to power of the "adherents of democratic values" from the "Islamic Front" to clear.

The deputy head of the Syrian Foreign Ministry, Faisal Mikdad, did not hold back in assessing Pillay and her statements: “She has been talking nonsense for a long time, we are not listening to her.” Yes, and the official herself played back a little later, saying: “I did not say that the head of state is a suspect. I cited the facts revealed during the investigation, which say that responsibility for crimes lies at the highest level. ” So what? The "ball" is already thrown. Weekdays information war, what could be there ...

Practically there is no doubt that the January conference on Syria in the Swiss Montreux end in failure. Too many forces are interested in this failure.

The anti-Syrian coalition recovered from the failure of the blitzkrieg is eager to take revenge from Russia, Iran and China for the September diplomatic defeat. Arab monarchies are willing to pay "the fight against tyranny and dictatorship in Syria."

The common “currency” that will be used to pay for revenge, the struggle for “freedom”, a new round of war is also known - the blood of the Syrians, the ruins of Damascus, Aleppo and Homs, the war of all against all in the Middle East ...

Ctrl Enter
Noticed oshЫbku Highlight text and press. Ctrl + Enter
We are
What you didn't want to know about EnglandInterview by President Bashar Al-Assad to the Sunday Times
Military Reviewin Yandex News
Military Reviewin Google News
22 comments
Information
Dear reader, to leave comments on the publication, you must sign in.