Neocolonial games and Islamization of Africa. To the intervention of the French troops in the CAR 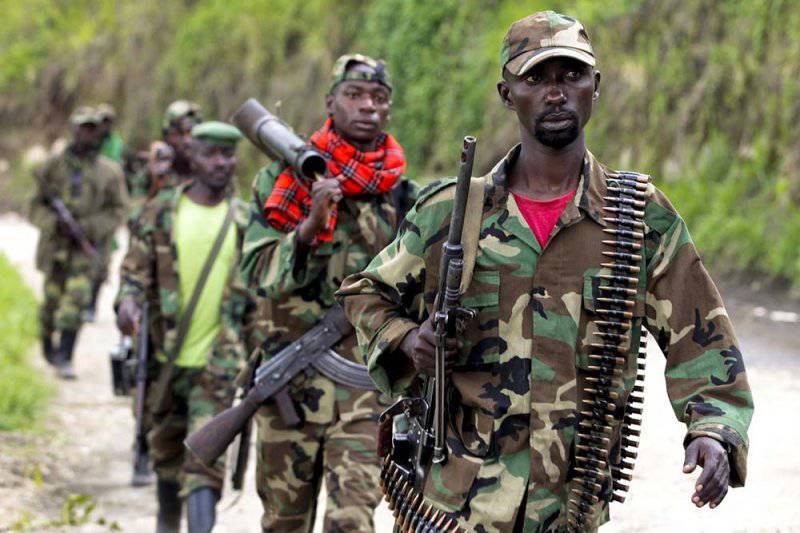 On the genocide in the Central African Republic today, everyone is asserting. Arab Al-Jazeera and Al-Arabiyah depict scenes of Muslim massacres, Parisian Figaro focuses on the destruction of Christian villages, and in countries of Black Africa they are alarmed by the threat of the complete collapse of local statehood. As well as the upcoming influx of refugees, which could outnumber the outcome of hundreds of thousands of black migrant workers and local residents of Negroid origin from Libya after the overthrow of Muammar Gaddafi.


As Senegalese philologist and political scientist Dr. Boli Kahn noted in an interview with "However," events in the CAR can be considered a distant echo of the Libyan catastrophe. According to him, African military experts confirm that local armed groups use weaponsstolen during the crash of the Jamahiriya: from machine guns and land mines to grenade launchers. And there is no reason not to believe it. The Government of Chad, whose territory separates the CARs from Libya, has for many years been trying to maintain a delicate balance between opposing rebel groups, some of which identify themselves as “Africans”, others as “Arabs” (and there are also inter-ethnic feuds). Chadian authorities, of course, not to smugglers. For the sake of fighting them, N'Djamena is not going to risk a more or less stable situation in recent years.

But back to the Central African Republic. The facts speak for themselves. First, hundreds of huts of local Christians were burned in the CARs, and entire villages were carved out. According to UN representatives, the entire raiders from the Islamist group "Séléka" ("Alliance", translated from the Songmo language) destroyed 14 settlements. Then the militants of the Anti-Balak militia (machete balak in local dialects), stating that “the punishing sword would be sent to the other side,” began to revenge, killing adherents of the Muslim religion. World news agencies first reported 130 dead, then "hundreds of victims." Another "African massacre" soon overshadowed the causes and essence of what is happening.

And again - the struggle for influence with China

France began this year with intervention in one African country - Mali, and ends with intervention in another - the CAR. But this does not bother the French president. “Here in Central Africa, France is not seeking benefits for itself. France only protects human dignity. The mission of the French military contingent is to restore security, protect the local population and ensure access to humanitarian aid, ”said Francois Hollande in Bangui (in the CAR he stopped on the way from South Africa, where he attended a funeral service for Nelson Mandela).

Do not confuse Hollande and the apparent similarity of the plots. Paris did not particularly protest against the overthrow in March of this year of the legitimate president of the CAR Francois Bozize. Similarly, a year earlier, the French did not intercede for the deposed Malian leader Amadi Toumani Touré. In both cases, pragmatic geopolitical considerations outweighed both the desire to “protect human dignity” and all other political and diplomatic dignities that the Elysee Palace now claims.

Amadi Tumani, as we remember, has played with Chinese investors, offering them the development of such an important strategic raw material as uranium. In the CAR, a similar game unexpectedly for the French was started by Francois Bosise. In 2010, he rehabilitated the notorious late Emperor Bokassa (“He built the country, and we destroyed everything he built”). Rumors of cannibalism of the first and last Central African monarch, according to Bosise, specifically launched the French media, dissatisfied with his independent foreign policy. With the rehabilitation of Bokassi, the deterioration of relations between the CARs and France began. Simultaneously, in Bangui, as well as in his time in Bamako, emissaries from the People's Republic of China frequent him.

With the aggravation of the situation in the Central African Republic at the end of December 2012, the Chinese government evacuated hundreds of specialists, businessmen, as well as ordinary workers from that country, whom they had just begun to import. Only the embassy staff in Bangui remained on the scene, on those days before New Year's Eve they were on duty around the clock. But the views of the CARs in Beijing were serious. The Xinhua Agency announced its intention to open the Confucius Institute in the Central African Republic, which was to become the center of the spread of Chinese cultural influence. Geologists from the PRC were going to begin the search for deposits of diamonds, gold and uranium. So the Islamist rebels, among whom, they say, there were a lot of “volunteers” from nearby Sudan, Chad and Nigeria, appeared in these parts at an opportune moment.

24 March 2013, the Séléka soldiers captured the presidential palace in Bangui. The leader of the Muslim armed forces, Michel Jotodiya, declared himself interim president. 64-year-old Dzhotodiya - an interesting figure. Frustrated agent of influence of the USSR, he studied for ten years in our country, he first graduated from the technical school in Orel, then the Moscow University. Patrice Lumumba, married a Soviet girl. Upon returning to his homeland, he worked as a tax officer and a consul in Sudan. At one time he considered himself a left politician and even headed the Union of Democratic Forces for unity.

However, in the twenty-first century, Dzhotodiya recalled his Islamic roots and formed the Muslim political coalition Séléka (Muslims make up about 15 percent of the republic’s population). When he came to power, he declared himself "the first Islamic president of the Central African Republic." However, on the eve of the December landing of the French military, he said that he did not control the rebel groups and most of all wanted to transfer power to a legitimate government. For now, he is ready for negotiations with the “Christian rebels”.

Shortly before Hollande’s visit to Bangui, the French contingent suffered its first casualties - “during a military operation to disarm opposing factions” (official version) two young soldiers, 22 and 23, died. Later they were buried with military honors in Paris. This event coincided with the Islamist mortar attack in the still unsettled Republic of Mali, which killed two peacekeepers from Senegal and another seven African soldiers were injured.

Trap for the french

“We are here to protect our village. "Séléka" come to avenge the people, and we are only protecting our village, "a member of the" Christian armed group "told French journalists the other day. In accordance with the mandate of the UN Security Council 1600, the French military must also protect civilians. However, as noted by Francois Sudan, editor-in-chief of the leading French-speaking African-language magazine Jeune Afrique, “the French army fell into the trap, because it seems that it supports only one side of the conflict - Central African Christians”. In his opinion, the visit of Hollande to Bangui, which was not coordinated with the provisional authorities of the Central African Republic, looks rather strange.

True, Sudan notes that not only the French, but also the authorities of neighboring Cameroon, the Democratic Republic of the Congo and Chad fear that the CAR will become a kind of “gray zone”, and jihadist groups such as Boko Haram (Nigerian Islamists) will take strong positions in Sub-Saharan Africa, which will certainly be a destabilizing factor for this region. ” Editor Jeune Afrique frankly admits that “among other things, France has economic interests in Central Africa. After all, uranium deposits, for example, attract such a French giant as AREVA (the largest nuclear power company in France). ” According to experts, the only problem is that Paris will have a long and expensive operation.

The authorities of many countries in Black Africa are also preparing for long and expensive operations. According to the Standard newspaper, in Kenya, for example, a bill is being considered that expands the rights of police officers who can now “shoot to kill” and detain terror suspects for an indefinite period. The last drop was the terrorist attack in Nairobi on December 14, when unknown persons threw grenades at a passenger minibus in the center of the city. As a result, four people were killed and fifteen injured. The authorities suspect Islamists from the same Somali group Al-Shabab, which has shot people at the Westgate shopping center in September of this year, in a terrorist attack. Similarly, the government of Nigeria, which also suffers from Islamist terror, may also resort to similar measures. The group "Boko Haram" ("Western education is sinful") continues to wage a terrorist war, the goals of which, according to experts, are very vague. Since May of this year, the three states of the country live in a state of emergency. For Nigeria as a whole, September was the bloodiest month when almost 500 people were the victims of nine militant attacks. In total, according to the UN Office for the Coordination of Humanitarian Affairs, from May to December 2013, more than 48 people died in 1200 clashes with militants. Of the recent episodes of the terrorist war - the tragedy on the road near the village of Bulabulin Ngaura (state of Borno), where on December 11 nine decapitated bodies were found near the bus.

In other countries, South Africa decided not to wait for the replay of the Kenyan scenario and to act proactively. According to Spanish El Mundo (referring to African sources), Angolan authorities propose to ban political Islam. “The law, which justifies direct persecution of Islam, has not yet been adopted, but the government is determined,” the newspaper says. For lack of appropriate licenses, the Angolan police have already closed 78 mosques. This, of course, heated up human rights passions (for example, representatives of Human Rights Watch expressed strong dissatisfaction). However, the Minister of Culture, Rosa Krush, explains the preventive steps taken by the government with a desire to “protect the nation from existing international threats.” Ethiopia is also taking serious measures to limit the influence of local Salafi groups, which, it should be noted, has experience in fighting Islamist separatism.

So, in black Africa - from the Sahara to the Republic of South Africa - the role of radical Islamists is growing exponentially. The revision of the postcolonial borders, the replacement of secular authorities by Islamists, and the emergence of large Sharia zones is noted everywhere. Experts even speak of the “African spring”. The demographic crisis in most countries of the continent creates ideal conditions for the domination of Muslims over Christians, followed by the suppression and physical destruction of adherents of local traditional cults and the secular population. Now we can talk not only about the activities of “Boko-Haram” in Nigeria, “Al-Shabab” in Somalia, JEDZA and other Islamist movements in Mali or “Al-Qaida in the Islamic Maghreb countries” in all the states of the Sahara and Sahel, but also about the radicalization of the situation in such traditionally Christian countries as South Africa, where the “colored” population (Pakistanis, Bangladeshi natives and people from India, among whom the percentage of Muslims is traditionally high) is drawn to radical Islam.

The West, first of all France, in its neo-colonial games is not the first time to rely on the Islamists, who not only allow them to get rid of the rulers, who are actively playing with China, but also provide a reason for direct intervention. Already a textbook example - Mali: the French sent troops to stop the actions of Islamic fundamentalists, to whom they themselves supplied weapons. And now in the Central African Republic, the Malian script seems to be repeated.