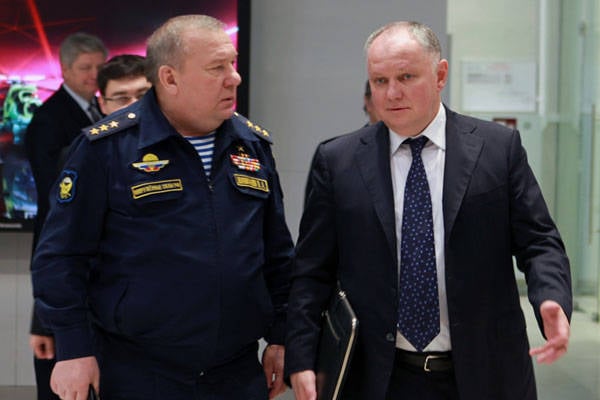 The Russian Helicopters holding company presented to the command of the Russian Airborne Forces prospective helicopter complexes and unmanned aerial vehicles of its own design and production. The presentation was held at the National Helicopter Center at a joint conference on the use of Russian-made helicopters in the interests of the Airborne Forces. This was reported by the press service of the holding.

“The construction of the Airborne Forces requires a new helicopter for reconnaissance, transportation, fire support and other special tasks,” said Airborne Troops Commander Colonel-General Vladimir Shamanov at the conference. “Today such equipment is actively supplied to the troops and we are interested in dynamic development. lineup in accordance with the range of tasks facing modern paratroopers. "

According to the director general of the helicopter holding company Alexander Mikheev, modern and efficient helicopters are being delivered to the troops, and the development of promising helicopter complexes for the Airborne Forces, the Navy and the Ground Forces.

It is no secret that helicopter equipment is used by the Airborne Forces when landing and evacuating sabotage and reconnaissance groups, landing tactical assault forces, maneuvering units and units of the Airborne Forces. Helicopters also provide aviation support and cover for landing forces, control and communications of units of the airborne forces. In addition, the range of tasks performed with the use of helicopter technology includes the setting of mine-explosive barriers, aerosol curtains and electronic jamming in the interests of the troops, as well as the material and technical supply of landing forces, the evacuation of the wounded and sick.

High mobility of the Airborne Forces is provided by units of army aviation that use military helicopters of the Mi-8 / 17 and Mi-26 series. The new models of this series, the Mi-8MTV-5 transport and the Mi-8AMTSH transport-impact, as well as the Mi-26Т2, developed by the Russian Ministry of Defense, are among the most modern machines meeting all the requirements of the Airborne Forces. The firing cover of the troops can be provided by the Mi-28H, Ka-52, and Mi-35М helicopters, which are built on the basis of the well-known attack Mi-24 and should eventually replace this helicopter in the troops. Mi-35M equipped with a complex of offensive weapons, the machine is able to take on board up to 8 paratroopers. Today in the Armed Forces of the Russian Federation light helicopters are beginning to enter service: the Ka-226T and the Ansat-U.

With the development of helicopter-type unmanned aircraft flying complexes, a significant increase in the effectiveness of a single information and intelligence system on the battlefield is possible. Modern onboard systems of helicopters allow them to perform tasks at any time of the day, in adverse weather conditions, with significant temperature changes, in mountainous and non-oriented areas.

On the eve it was announced that the military had delivered a new batch of Ka-52 combat helicopters. Helicopters, reportedly, will go into service with the army aviation of the Western Military District. The official ceremony of handing over the Ka-52 party to the customer took place in the presence of Air Force Commander Viktor Bondarev, Director General of the Russian Helicopters holding company Alexander Mikheev and Managing Director of the Progress Aviation Company of Aviation Company, which produces Alligators, Yuri Denisenko.

The Ka-52 reconnaissance and shock is an all-weather combat helicopter of round-the-clock use for solving reconnaissance and command tasks for a group of combat attack helicopters. It is equipped with devices to reduce visibility, electronic protection system, active countermeasures and is equipped with powerful offensive weapons. "Alligator" provides high security of the crew. To facilitate the piloting of the helicopter in the onboard equipment includes modern automated systems.

Practically completed work on the creation of the marine version of the Ka-52K. These formidable rotorcraft machines will be based on the Russian Mistrals, as well as on other ships capable of taking helicopters on board.

Ctrl Enter
Noticed oshЫbku Highlight text and press. Ctrl + Enter
We are
The action “Military service under the contract is your choice!” In Rostov-on-Don: future contract servicemen, exhibitions and “Russian Knights”Russia demonstrated the most promising weapons at INDO Defense-2014
Military Reviewin Yandex News
Military Reviewin Google News
13 comments
Information
Dear reader, to leave comments on the publication, you must sign in.