December 26 2013
129
Growing up in 1980, the future writer from Atlanta, Don Gammill, thought: "The only good communist is a dead communist." Years have passed. The boy grew up and learned to distinguish subtleties and nuances, and would not have used “cheers” to use expressions like “dead communist”. Nevertheless, you can’t call this author’s supporter of the USSR with all the desire. However, about the late M. Kalashnikov - "legendary" - he responded with great reverence, and his brainchild (AK-47) called it "famous." 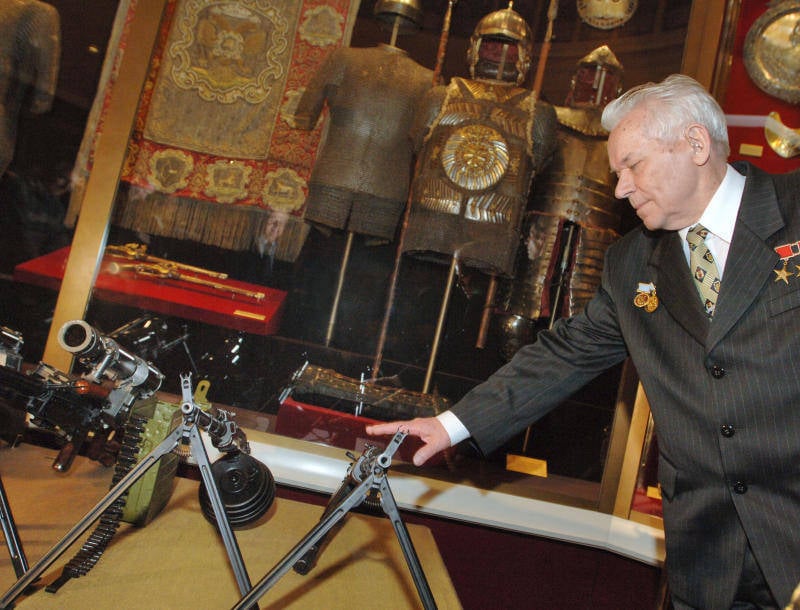 In the article “Eulogy Kalashnikov” ("The Truth About Guns") The author called the “final product” of the designer “quite revolutionary”. Mikhail Kalashnikov the writer considers a true Marxist, "believer" in the Politburo. The main idea of ​​the designer, according to the author, is the defense of the motherland. True, the writer immediately notes that AK-47 has done much more than just defended Mother Russia. Yes, AK of various types over the years have killed a huge number of innocent people, and this, of course, is tragic, notes Don Gammill. But this weapon also defended, preserved, and liberated innumerable lives.

Kalashnikov was asked if he regretted not living in the West — he would have been able to monetize his success there. The designer explained that the USSR did not think about patenting inventions, but worked for the good of socialist society, for the good of the people. And about this Kalashnikov, in his words, "never regretted."

According to the American writer, M. Kalashnikov is a sincere, unrepentant communist. But regardless of his beliefs, the author writes, "I definitely cannot rejoice at his death." About such a person should respond exclusively with respect.

In an article by S.J. Chivers ("New York Times") it is recalled that at first American experts underestimated the Kalashnikov assault rifle, finding it insufficiently accurate and poorly made. His striking power did not impress the Americans either.

However, in Vietnam, AK was waiting for real success. In 1960, a new American M-16 rifle had serious problems with corrosion, it stuck in the jungle, but the Kalashnikov assault rifles used by the Viet Cong guerrillas and the soldiers of North Vietnam worked almost perfectly!

Today, according to various sources, the world has manufactured from 70 to 100 million Kalashnikov assault rifles; This number is not comparable with any other machine. Even the United States has become an active buyer of the AK, arming them with anti-Soviet militants in Afghanistan in the 1980s and the Afghan and Iraqi forces in recent years.

In recent years, General Kalashnikov urged his interviewers not to portray his life as poor, noting that he has a spacious apartment, a good car, and a comfortable cottage by the lake near the factory where he worked for many decades. The reward was the work itself. He was devoted to the country. He was sometimes told that in the West he would have been a multimillionaire long ago, and he replied: "There are other values ​​as well."

M. Kalashnikov did not approve of those who, in his opinion, hastened to destroy the Soviet Union and who were unable to control the political and economic chaos that followed the collapse of the Soviets. In the memoirs and interviews, he sharply criticized Mikhail Gorbachev and Boris Yeltsin, notes the New York Times.

Until the very end, he was loyal to socialist ideals and leaders, despite the fact that the land and the house of his family were seized during collectivization. When he was a child, his family was deported to Siberian wilderness, the correspondent reminds. His father died during the first Siberian winter, and one of his brothers, being a prisoner, worked for seven years on Belomorkanal. Nevertheless, General Kalashnikov spoke of his great respect for Lenin and Stalin and added: "I did not know him (Stalin) personally and regret it."

Paul Cornish («The Guardian») writes that the Kalashnikov assault rifle, ahead of its time, became so common that it gained a symbolic meaning.

This weapon retains its reliability even in the most extreme field conditions - with extreme ease of maintenance. According to the author, the self-taught Kalashnikov achieved unsurpassed superiority in his field - in fact, accomplished a real feat, considering that among the creators of Soviet weapons was fierce competition.

The first Western historian who came into contact with Kalashnikov was Ed Izell of the Smithsonian Institution. In a conversation with him in 1989, the great designer, the author writes, revealed the secret of his success. He said that inventors should have the flexibility and be able to abandon their own concepts when necessary; too many of them became attached to their ideas, "like an old maid to their cats." Constant revaluation of their own ideas and allowed the designer to develop reliable weapons. Kalashnikov loved to repeat the maxim: "There is no limit to perfection."

В Washington Post With reference to the Associated Press, they also wrote about Kalashnikov.

The brainchild of the designer newspaper calls reliable and easy to use. It is also reminded that AK surpasses M-16 in sandy or wet conditions. There are also the words of M. T. Kalashnikov himself that during the Vietnam War, American soldiers preferred to throw away their M-16 and use trophy AK-47. The designer said this in July at 2007 at the ceremony marking the 60 anniversary of his machine gun.

The Kalashnikov assault rifle even got into the coat of arms of Mozambique.

In the 2007 year, the Washington Post notes, President Vladimir Putin praised the designer, saying: "The Kalashnikov assault rifle is a symbol of the creative genius of our people."

At the end of 1980, Kalashnikov worked as chief designer at Izhmash. He also traveled the world helping Russia to negotiate new arms deals, he wrote books about his life, about weapons, books addressed to young people.

“After the collapse of the great and mighty Soviet Union, so much shit was imposed on us, especially the younger generation,” he said. “I wrote six books to help them find their way in life.”

He was also proud, reminds the American edition, the fact that in his native village Kurya in Altai his bronze bust was installed. According to the designer, the newlyweds bring flowers to the bust and whisper: "Uncle Misha."

“I wish all of us happiness and healthy children,” he said.