Ex-commando: Police do not want to be a switchman 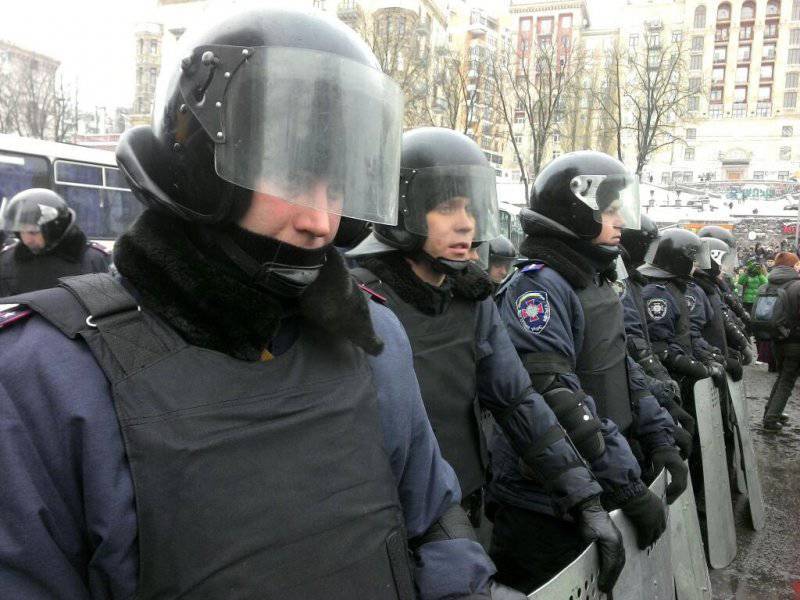 Is it possible to use force against the Maidan participants, is there a compromise possible and what do internal security officers feel today in an exclusive interview with the controversy, said the head of the “Legal Protection Association of Security Force Veterans”, former special forces officer Alexander Didukh.

- Alexander Leonidovich, what could be the scenario of the development of events and what could be the culmination of the Maidan? After all, it is no secret that today a campaign has unfolded, in fact, the persecution of the Interior Ministry employees, and first of all - the “Berkut”.

- We see three ways out of this situation. The first is when the Maidan exhausts, and the force will not have to be used, the second is when the real negotiations between the authorities and the opposition begin, the third when the force is used against the participants of peaceful actions by a harsh method. The Maidan is a “living organism”, and there are many honest and decent people, the majority of whom, because the people's anger is associated with total corruption in the country, including in law enforcement agencies and the judicial system. As for harassment, our organization of the legal protection of veterans of the security forces will protect victims from persecution. But the situation is too ambiguous. "Golden eagle" is confused, his command in Western Ukraine in general refuses to take part in the dispersal of peaceful Euromaidans. This is the most complicated legal deadlock. No one knows how to get out of this situation.

- We are so eager to the European Union. In your opinion, is such a rough seizure of the Bundestag possible in Germany, for example? Is it really impossible to force out the protesters by force from the captured buildings of the capital?

- In Germany история with a bulldozer, as we had on Bankova, would not have occurred to any law-abiding German. Our people have a completely different mentality. We do not like to obey the laws, and even the most beautiful of them are ignored, and this continues for the 23 of the year. We cannot use force without a court decision regarding the captured buildings. For the time being, a compromise decision has been taken that the security forces will act exclusively as peacekeepers.

- Excuse me, but how is this possible, when at the OSCE meeting Mykola Azarov sounded the figure that there are more than 2,5 thousands of militants in Kiev? Can they somehow be localized and neutralized in order to avoid casualties?

- You yourself are well aware that this depends on the competence of the SBU and the desire of the authorities to change the situation. Everything can be done, and there are forces for it, and there are means. However, in my opinion, we have a rather high probability of a “bloody scenario” followed by the collapse of Ukraine.

- During the time of Leonid Kuchma’s presidency, they coped with such “abnormal” situations.
- Yes, because the country was different! But the methods were the same. Remember when Tsushko ordered to storm the Prosecutor General's Office. Already later, during the "debriefing", a young lieutenant was appointed guilty. The prestige of the rank of officer was destroyed for more than one year, and this was done not without the intervention of the ruling elites.

- And what is the mood now in the police?

- Yes, the most different, but not very funny. The overwhelming number of employees do not want to be "switchmen", hostages of foreign political games. I believe that it would be fair on the part of the opposition to remove themselves deputy powers and stand on the Maidan with the people. But somehow it turns out to be interesting in our country: politicians “turn on” the crowd, and then run into a warm session hall and fail the resignation of the Cabinet of Ministers! Our people are not idiots! They understand that there is no leader in the country. As for our police, you are well aware that its employees practically do not control the huge city outside Maidan. Kievans save themselves as they can. Now there are many Afghan soldiers in the “body” of Maidan, as well as real combat officers who are outraged by the current government. At the same time, it’s scary to imagine a civil war in Ukraine.

- Alexander Leonidovich, and what should be the psychological preparation of the "berkutovtsa"? Can they lose their nerves in a difficult situation?

- Psychological training is an integral part of the training of any employee speznazovtsa. This includes the ability to keep order, rapid deployment, the ability to quickly identify and tear the instigator out of the crowd. Actually, this is the psychology of spetsznaztsa. Any professional should be able to divide the crowd into parts, isolate an aggressive core from it and block it. Often, the guys do not have time to think, and the main actions are, as they say, on the “machine gun”. All unrest is an explosive, rapid process, so you need to analyze the situation the day before. We worked out the technique in similar training activities, dressing in civilian form, provoking and vice versa. When I worked in the internal power structures, I remember very well how sharpening, smoke bombs, knives, and stones flew into us. This does not disappear from memory at all. But this is our profession, which we chose ourselves. At the same time, never "Berkut" did not work out the technique to beat the bedridden, women and children. According to the instructions, a “berkutovets” should put on handcuffs at the time of resistance to him, and if people do not offer resistance, then the force in general is not right. Why "Golden Eagle" exceeded authority on the night of Saturday and Sunday? It is difficult to answer this question, but if the provocative chain went ahead, the Berkutovists beat everyone. However, the investigation will deal with this. For example, in Israel, if a person is prone to displaying unmotivated aggression, he generally cannot serve in such units.

- The opposition has registered a bill on the elimination of special forces "Berkut" in Ukraine.

- Well, what can I say! Another spittle in our direction. In the hospital of the Ministry of Internal Affairs there are guys with burns of the eyes, fractures of the ribs, hands, legs, injuries of the kidneys, back. There is a guy with a split heel who can never walk. I do not know how to comment. In no other civilized country of the world is it possible that the special forces would “merge”. The injured in the hospital are dressed in tracksuits and in every way conceal that they are “Berkutovtsy” because they do not want unnecessary questions and attention to themselves. Many of them are planning to leave the service after discharge. Unfortunately, the overwhelming majority of police officers know only two articles from the legislation, 14 and 15: about the use of special equipment and the use of weapons. If you ask our rank-and-file militiaman what articles of the Constitution he knows, he will not name one, because he is uneducated and is not materially motivated. So far, the system works against those who must protect ordinary citizens, and therefore the people are on the Maidan, and not because they have nothing to do.

Ctrl Enter
Noticed oshЫbku Highlight text and press. Ctrl + Enter
We are
About Stalin and KhrushchevRevealed the secret of provocation in the American Boston
88 comments
Information
Dear reader, to leave comments on the publication, you must to register.