The Air Force accepted the first AN-148 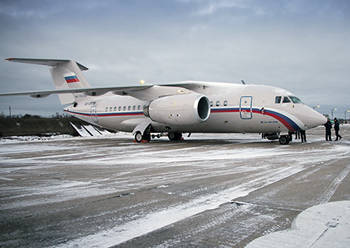 The Russian Air Force received the first An-148 military transport aircraft, transmitted Interfax via its channels. The cockpit, the cabin examined the plane arrived at Borisoglebsk training aviation base Minister of Defense of the Russian Federation Army General Sergei Shoigu. “A good car, we need those,” the minister said, leaving An-148 on the airfield of the airfield. And the general director of the Voronezh Joint-Stock Aircraft Manufacturing Company (VASO, An-148 manufacturer) Vitaly Zubarev told reporters that in accordance with the contracts signed with the Ministry of Defense, under the defense order of the Russian Air Force, by the end of 2017 they will receive 15 An-148 aircraft. “This year we built and handed over to the Air Force the first aircraft, in 2014 and 2015 we will transfer four more annually, in 2016 and 2017 - three more annually,” the head of VASO said. He explained that the An-148 is a medium-haul transport aircraft with a capacity of up to 75 people, designed to carry personnel. Depending on the modification, the An-148 can make flights with a range of 2 to 5 thousand km without intermediate landings; it is adapted for landing on unpaved airfields. Cruising speed is 800–870 km / h. “The An-148 located here in this layout is designed to carry 60 people in economy class and 8 in business class,” Zubarev said.


According to the Air Force spokesman Igor Klimov, the An-148 aircraft will be part of the 800 th aviation base of the special purpose military transport aviation of the Russian Air Force and will be based at the Chkalovsky airfield near Moscow. Several of these aircraft VASO will produce for other law enforcement agencies of Russia. Thus, the second An-148, released under the state defense order, must be made available to the FSB by the end of 2013.

Ctrl Enter
Noticed oshЫbku Highlight text and press. Ctrl + Enter
We are
In St. Petersburg opened a naval salon
51 comment
Information
Dear reader, to leave comments on the publication, you must to register.