The state-owned company in the defense industry is the Norwegian experience. The Kongsberg Gruppen evolution is a great example for Russia

December 12 2013
6
In the past few years, the Russian state has been able to revive the national defense industry complex with a solid state defense order, loans from state banks and other instruments. However, it remains an open question whether the companies of our defense industry will be able to function successfully and develop in the conditions of a slowdown in economic growth in the country and limiting the growth of the state defense order, which is quite predictable today.


The decline in the state's ability to finance defense programs will present defense companies with the need to significantly increase production efficiency, diversify production programs, as well as attract private investment and, consequently, enter an IPO. Simply put, we need a transition to development models typical of companies in the military-industrial complex of Western countries. Since there is no talk of the complete privatization of state corporations in the Russian defense industry complex, it would be advisable to first of all turn to the experience of functioning of companies that remain in state ownership. I would like to acquaint readers with one such company - the Norwegian Kongsberg Gruppen. Despite the many differences between the Norwegian and Russian economies, they are related by a significant dependence on oil rent, which in general has a negative impact on the efficiency of the manufacturing industry. And Kongsberg Gruppen is a Norwegian Rostec, a state-owned company that conducts many production programs that are often unrelated to each other. At the same time, the defense division of Kongsberg Defense & Aerospace AS is a modern effective company with strong positions in a number of market niches, even in the global market.

Kongsberg Defense & Aerospace AS is a subsidiary of the Norwegian concern Kongsberg Gruppen (it owns one hundred percent of the shares of Kongsberg Defense & Aerospace AS). The concern itself traces its history back to the Kongsberg Vaabenfabrik company founded in 1814 (literally “Armory Kongsberg factory "). It got its name according to its location - the small mining town of Kongsberg (Kongsberg of Buskerud province in southern Norway). Founded in 1624, Kongsberg was for a long time the main center for silver ore mining in Norway (there was also a mint), but after the depletion of its reserves at the beginning of the 1814th century, the kingdom government decided to reorient it to a weapons manufacturing center. Throughout the 1905th century, the Kongsberg factory produced small arms for the small Norwegian army (from 1886 to 1892, Norway was in union with Sweden and the Swedes bore the brunt of the defense of the union). The fame at the Kongsberg factory was brought about by the activities of its director and weapons engineer, Ole Krag. In collaboration with the factory gunsmith Eric Jorgensen, he managed to develop and present in 1894 one of the most successful models of a shop-mounted rifle with a longitudinally-sliding bolt. At the end of the 1904th century, the Krag - Jorgensen rifle entered service with the armies of Norway and Denmark; these rifles were also supplied in significant quantities to arm the army of the Republic of South Africa (Transvaal) and earned an excellent reputation for accurate and convenient weapons during the Boer Wars. The greatest export success for the Krag - Jorgensen rifle came in 1903, when she won the competition for the main infantry weapon for the American army. About half a million of these rifles were manufactured under license from the Springfield Armory in Massachusetts between 1903 and 1905. Until 1914 (adopting the MXNUMX Springfield), the Norwegian rifle was the main infantry weapon of the US Army. After Norway gained independence in XNUMX, Kongsberg Vaabenfabrik remained the country's main arms factory. During the Second World War and the German occupation, the factory continued to produce Krag - Jorgensen rifles, as well as (under license) Colt MXNUMX pistols, which were used by the militarized wing (Hirden) of the pro-Nazi party of Quisling. 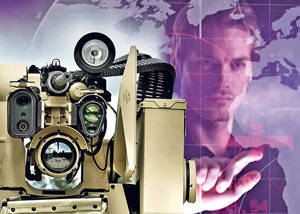 The present heyday for Kongsberg Vaabenfabrik began in 50-s after the formation of NATO (Norway was among the founding members of the alliance in 1949-m) and the beginning of the implementation of the Marshall Plan. Since the factory in Kongsberg was among the few any significant industrial enterprises in the country, whose main source of income remained fishing and whaling, it was chosen as one of the locomotives of industrial development in Norway. An important factor was the discovery of oil fields in the North Sea in the 60s. The Kongsberg Vaabenfabrik shipbuilding division in Horten became one of the main suppliers (along with other state-owned companies of Norway - Kv Aner and Aker) of oil-producing offshore platforms, and the head company in Kongsberg was a supplier of mining and pumping equipment for the oil-producing (and later gas-producing) industry of the country.

Revenues from the supply of equipment for oil production allowed the company to make major investments in the development of production, including the machine tool industry, the shipbuilding industry and even rocket production. The most important success of Kongsberg Vaabenfabrik in the second half of the XX century is connected with rocket science. In 60, the company, jointly with the Norwegian Defense Research Establishment (Forsvarets Forsknings Institutt - FFI), with technical assistance from US and German companies, developed the Penguin anti-ship missile for the Norwegian Navy. Since the use of the radar homing head was considered ineffective in the Scandinavian fjords, the Penguin radar was used for the first time for a rocket weapon of this class to use infrared homing equipment. Initially, the rocket was intended for use with rocket boats and coastal batteries, so it was distinguished by its compact size, which later allowed to use it from helicopters and airplanes. The combination of these factors provided the missile with significant export success - it became the main anti-ship weapon of the short-range action of the NATO countries and was adopted by the US Navy under the designation AGM-119. The launch of the Penguin missiles and the licensed release projects of the American M113 armored personnel carriers were the main production programs of Kongsberg Vaabenfabrik by the end of the Cold War.

However, in general, 80-e years - a difficult period for the company. Affected by the large number of non-core assets, the costs of poor management of the state-owned company, as well as the general stagnation of the Norwegian economy caused by the effects of the so-called Dutch disease (complex consequences of a resource-oriented economy for the manufacturing industries related to rising labor costs, strengthening the national currency, etc.) d.) The penalties imposed as a result of the investigation of the so-called Toshiba-Kongsberg scam were a serious blow to the company. The two companies were convicted of delivering numerical control milling machines to the Soviet Union, which, according to the Americans, were used to manufacture submarine components with reduced noise parameters to bypass the export restrictions in force.

The result was the disbanding of the Kongsberg Vaabenfabrik. Excluded from the company all the assets associated with the production of civilian products. The production of military products was consolidated as part of Norsk Forsvarsteknologi AS. Under this name, it was listed in 1993 on the Oslo Stock Exchange. In total, 50 percent of state-owned assets were sold out (although other Norwegian state-owned companies acquired a significant portion of the assets). In 1995, the company received the modern name Kongsberg Gruppen. Later, the Kongsberg Gruppen absorbed part of the assets sold after the dissolution of Kongsberg Vaabenfabrik, and significantly diversified production due to civilian products.

The structure and current state of the parent company

Kongsberg Gruppen remains a state-owned company. Fifty percent plus a gold share is controlled by the Norwegian Ministry of Trade. In addition, a significant part of the remaining fifty percent belongs to other state-owned companies in Norway. In particular, about seven percent is under the control of the State Insurance Fund (Folketrygdfondet), another eight percent is under the control of the hydropower company Arendals Fossekompani.

The Kongsberg Gruppen business is divided into four main areas.

Ctrl Enter
Noticed oshЫbku Highlight text and press. Ctrl + Enter
We are
Way out of chaosTo the peculiarities of the modern Russian military-technical policy
6 comments
Information
Dear reader, to leave comments on the publication, you must to register.