On the issue of the development of the Russian strategic nuclear forces. Point of view of the inhabitant

December 10 2013
62
It is probably no secret to anyone that the Strategic Nuclear Forces (SNF) is the main guarantee of Russia's sovereignty. And over the past two decades, their role has only increased, because in the field of conventional weapons, we have essentially lost ground (both quantitatively and, in places, qualitatively). Thus, the preservation of strategic nuclear forces is a paramount task for the military-political leadership. It is quite obvious that it is aware of this (it can be seen at least from the costs of the LG). But there is a noticeable difference between awareness and realization. Not everything is decided only by money. It is necessary to set adequate goals and to achieve them. And this is not just the execution of the budget ...


The author is not a specialist, just trying to give his subjective assessment of the information that spills over us in the media. He was led to this unceasing discussion, leading to two different conclusions: either everything is very bad, or everything is very good. Let's figure it out. 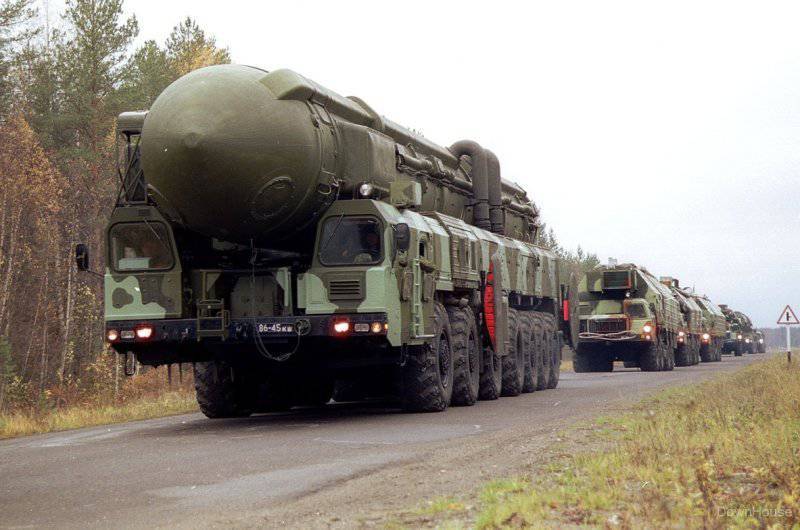 But the main thing is hidden between the lines. It is important not only the number of new carriers, but also the number of warheads capable of accommodating them. And with “Topol” everything is simple. One rocket - one monoblock warhead. Total 60 "mine" plus 18 "mobile" = 78 warheads.

Basically, the reason for "monoblock" lay in the agreements between the USSR and the USA as early as the 80s. We will not go into details - this is different история... But, one way or another, the modern Yarsy (and the promising Frontiers) are equipped with just the FER (probably, according to 3 BB per rocket). It is easy to calculate that the 18 “Yars” = 54 warheads. Can "Yarsy" and "Frontiers" become the basis of the Strategic Missile Forces, as is often said so now? Theoretically, yes. Well, almost ... depending on what you mean by foundation. So far, they carry only 10% of the total number of strategic missile warheads. And the main carriers of warheads are heavy liquid ICBMs. P-36М2 carries up to 10 BB similar BB "Topol", and UR-100N UTTH - to 6 BB. In other words, about 120 missiles are carried under 1000 warheads. Accordingly, for the complete replacement of old missiles, it is necessary to produce more 300 light-grade missiles (such as "Yars"). This figure is not exorbitant (given that 2014 promises more 20 missiles), but is this approach appropriate in the context of the US-created global missile defense? And the power of each BB on Yars will be less (obviously not according to 500 Kt).

The indisputable advantage of heavy MBR is the large throw weight. This allows not only to increase the number of BBs or their power, but also to place a large number of means of overcoming missile defense. These missiles also have disadvantages. The main thing is the price. Liquid rockets are usually more expensive than solid propellants. And given the difference in size - even more so. But, on the other hand, mobile complexes are also not so cheap. Operating costs, depreciation of equipment and the associated lower life cycle are also an argument. Most likely, because of the economy, the “mine” Topol-M appeared. But they are deprived of the main dignity of the Topolins - the relative secrecy.

So without a heavy rocket, probably not enough. It is created. According to media reports, it will appear by the end of this decade. The only thing that is known about it is the weight (of the order of 100 t). Thus, in terms of parameters, it is closer to UR-100Н УТТХ, and not to 200-ton Р-36М2. Of course, for many it will be a reason for criticism, they say, "it was better before, but now they can do nothing." Only now, it is counterproductive to measure “who has a bigger rocket”. Probably, we are just seeing a reasonable compromise "throw weight / price."

If all plans are implemented, then the main strike force of the Strategic Missile Forces will still remain heavy liquid ICBMs (several dozen). Well, the most massive will be just solid light. Partly - mobile, part - mine. There is also information about the revival of combat railway missile systems (BZHRK), but so far these are only plans for the future ...

Navy
The naval component of the SNF has long been a topic for violent disputes. And the reason for this - "Mace". It became a kind of “Solomon solution” (in the literal and figurative sense) after the cancellation of the Bark project. There are a lot of complaints about the Bulava. And relatively "modest" characteristics, and "legendary" reliability.
It seems that the main problem is reliability. We are facing a paradoxical situation. The carriers (nuclear submarine pr. 955 "Borey") have already actually entered the series, but there is no reliable missile. Accordingly, there is no COMPLEX.

At the moment the situation is not catastrophic. The strategic nuclear submarines of the 667BDRM and the BDR were repaired and upgraded under the R-29RMU2 “Sineva”. Thus, some time is still there, but it is getting smaller.

There is a point of view that the Bulava project should be closed. In this regard, often express different proposals. Then adapt the "Blue" under the "Borea", then return the famous "Shark" (!) And develop a heavy liquid-based rocket based on the P-39 for them. All these plans are unrealistic both in terms of time and financially. The only option is to bring the Bulava to the required reliability, replacing the current strategic missile carriers with the Boreas.

As for the characteristics of the rocket - it is a matter of specialists The rocket was created for the purposes for which it was created, and it has those characteristics that were presented to it at the stage of development of the TK. Fundamentally here is another: the ability of the COMPLEX (Borey and Mace) to perform the function of nuclear deterrence. It seems that he is capable of this (when the Bulava is brought). Yes, the alternative is less impressive than the Sharks, but the only possible one. I repeat, it is not necessary to measure rockets, for it is meaningless.

Air force
Concerning aviation component of the nuclear triad, then everything is pretty foggy.

It seems to be a modernization of the existing fleet of strategic missile carriers. However, based on the pace and slippage, it can be concluded - there is also not all simple. Yes, and their number of aircraft is not so large - about 45-50 machines.

One gets the impression that less attention is paid to the air component of the SNF than to the others. Perhaps this is due to the fact that the timing of its updates shifted over the 2020 year. (PAK YES promise to 2025). The only relatively recent project can be considered a new cruise missile X-102, which seems to have even been adopted. The question is only in the mass character of its delivery to the troops. But, probably, it is associated with the modernization of the missile carriers themselves. In general, the topic is complex and only for specialists. One thing is clear, by the year of 2025, the Air Force must also receive a new COMPLEX - an aircraft and its armament, and not just one thing. Otherwise, we can repeat the story of the Bulava, which is fraught with problems.

Thus, the situation with domestic strategic nuclear forces cannot be considered unambiguously good or bad. At least from the point of view of the inhabitant. There are pluses, there are minuses. Probably not allowed any fatal errors at the level of strategy. The main problem now is the implementation of the plans. Difficulties arise in the executive discipline, and in the economy. Figuratively speaking, the main problem is not how many hundreds of kilograms the Bulava casts, but whether it can do this reliably and whether it will be in service with the right amount. In general, as always, time will tell everything ...

Ctrl Enter
Noticed oshЫbku Highlight text and press. Ctrl + Enter
We are
About Stalin and KhrushchevWhat you didn't want to know about England
62 comments
Information
Dear reader, to leave comments on the publication, you must to register.