Theft as a fundamental principle 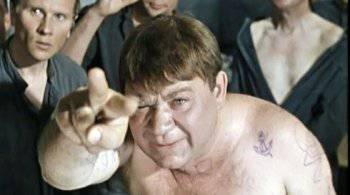 The concept in itself is interesting - theft. The person committing the theft is simply called the BOP. And in itself this “title” is by no means an ornament. Is it only in the distorted understanding of the representatives of the world of crime, where this concept is elevated to the rank of valor and attribute of celestials.


But this is “simple” theft, not covered by abstruse and respectable terms. But there is another kind of theft - more greedy, omnivorous, shameless and insatiable. This is the theft of ideals, intellectual achievements, historical truth and moral foundations. And this theft - more sophisticated, cynical, anti-human, vile and, especially bitter, - especially dangerous.

This theft is accomplished not by penetrating a window of an apartment or by banal passers-by robbing (although those who practice this type of theft often neglect these methods), but by using controlled mass media, party and even state ideology.

This whole preamble to the fact that, looking through the materials on the Internet, I came across an article that the United States is ready to go to an armistice with Bashar Assad !!! Anyone more or less familiar with the root causes and the course of all this sad Syrian man's epic such news will cause some surprise. How?! The stronghold of democracy and humanity around the world is ready to go to the world with a "bloody Syrian dictator" ?! A state that loudly declared its desire to dislodge and destroy this very Assad? A country that promoted the aggression of anti-Syrian hysteria and put a lot of strength and capital into flooding Syria with religious fanatics, cannibals and just scumbags ?! It turns out that this can not be surprising if these assurances come from representatives of the country for which the distortion of truth and theft is the norm.

Confirmations? You are welcome!

All of humanity knows that in the middle of the last century, evil on the planet called the Second World War took place. And this evil was staged and festered in Germany by tireless efforts from overseas.

God was on the righteous side - on our side. And Russia, shoulder to shoulder with the fraternal republics of that time, overcame this evil and drove it into a deep hole from which this evil, however, did not cease to grin. In fact, the peoples of the USSR broke the back of this fiercest beast and saved the peoples of the world from this plague. It would seem that the gratitude of these peoples is quite an expected reaction. What happened at the beginning. And the “Norwegian brothers” put monuments to the liberators and inscribed them: “The people of Norway will not forget you,” and the Polish gentlemen thanked with tears in their eyes for saving Warsaw from complete destruction, and our friends from the worldwide coalition thanked the USSR for made a decisive contribution and so on. and so on. and so on.

And then came to Earth Peace, and yesterday's brothers by arms they tried to forget the feat of the one who broke and threw the Hitler colossus into a landfill, and at the same time set about their usual business. Tried to banal steal the pride of the winner, juggling, distorting and multiplying their successes.

Result: the Japanese, on whose heads nuclear hell was dropped, with “samurai” obedience tolerate foreign bases on their territory and demolish all the atrocities perpetrated by the United States fighters. Proud Scandinavians and Balts excel in each other about who will throw more shit to Russia by the side. The Poles, in their desire to show the whole world the crime of ALL intentions of Russia, are ready to have such a natural phenomenon as fog call the criminal action of the dictatorial Russian regime undertaken to destroy the Polish president.

And all this is supported by the “authoritative opinions” of experts and analysts of various kinds or simply “sources”.

Another example of global theft is to fasten the whole world to a piece of paper (the dollar), which today is not supported by anything other than the military power of the US Department of State, inflated in time by the cheeks. Wonderful scam turned out! To force the controlled countries to pray on a piece of paper, for which all imaginable and not imaginable REAL benefits have flowed into the issuing country! These benefits mean everything - both resources and brains.

But times are changing. Grind shtatovski establishment. With an increase in self-awareness of individual countries, there is a gradual abandonment of the dollar as the main reserve currency. The sources of good brains also become shallow. Whereas the root ones come up with good brains - without being introduced and lured from the outside? Everything is started up for consumption and satisfaction ...

Changing and methods of theft. They have already reached the point that they have thought of pretending to be almost Syrian friends (no, not the people! They call themselves those long ago, not forgetting these people to chop minced bastards with their hands) President Bashar al-Assad.

But in order not to look like frank primitives, they came up with a rationale: "... due to the fact that excessive concentration of religious radicals can later have serious consequences for European countries and in general, the US civilization can go to reconciliation with the government of Bashar al-Assad." Two points are very remarkable in this statement: the Assad government is already called the GOVERNMENT, not the “bloody regime”, and the word “can”, i.e. Will be forced to reveal their will, if they are asked to do so.

What is it? This is a trivial attempt to preserve the “face of the face” with the inevitable failure of all its efforts, and, what is most outrageous, to commit another theft — an attempt to steal the pride of the Syrian people and Syrian President Bashar Al-Assad for victory over a ruthless, unprincipled and many times stronger opponent.

That is the principle of theft at the state level, built into the foundation.

Ctrl Enter
Noticed oshЫbku Highlight text and press. Ctrl + Enter
We are
A great interview with Sergey Lavrov: about Ukraine, Obama and IranWhat you didn't want to know about England
76 comments
Information
Dear reader, to leave comments on the publication, you must to register.