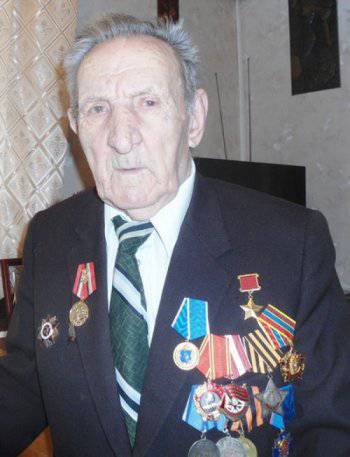 This 9-storey house under the number 5 on Victory Boulevard in Astrakhan is also known as the house of Heroes, because nine Heroes of the Soviet Union lived there 40 years ago. Unfortunately, time does not spare anyone; veterans of the Great Patriotic War are passing away - dear and honored people. So in this house today only one holder of the Golden Star remained in the lists of tenants - Andrey Panteleevich Tulnikov.


... Despite his advanced age, Andrei Panteleevich himself opened the door for me. He wore a ceremonial jacket with all the regalia - the Gold Star medal and the Order of Lenin, the Orders of the Red Banner and World War I, the Red Star and Glory of the III degree, and three medals For Courage.

Despite the services to the Fatherland and the status of Hero, Andrei Panteleevich is a very modest and easy-to-communicate person. What explains its peasant origins. After the war, he worked as a mechanic at a lumber station, and then from 1964 to 1993 a year as a driver and mechanic at the Volga Railway in the Astrakhan Directorate for Passenger Services. His valiant work is marked by the signs "Drummer of Communist Labor", "Honorary Railway Worker", numerous records of rewards in the workbook ...

- How is your health, Andrei Panteleevich? - I appeal to Tulnikov.

- Thanks, I'm not complaining. Today I plan to walk outside my house, sit on a bench with my front-line friends, the veteran smiles.

- Can you give the names of your fellow soldiers with whom you accomplished the feat on the west bank of the Oder during the capture and defense of the springboard in January 1945?

- In the war, I received three wounds, a severe concussion, after which my memory became rather weak. But I will try to remember, write down: Zhirkov, Voronin, Dubin and others ...

In the 2 volume of the book “Heroes of the Soviet Union” (Moscow, Voenizdat, 1988), there is a description of this feat. It says that the commander of the 416 th rifle squad of the 112 rifle division of the 13 th Guards Army of the 1 of the Ukrainian Front, a Komsomol sergeant Andrei Tulnikov, distinguished himself when he crossed the Oder in January 1945. For three days he built rafts and built crossings. 26 January at the village of Domzen himself crossed the river, participated in the battles for the bridgehead ...

The description is rather brief, so in a conversation with Tulnikov himself I try to find out the details of those events.
“According to the plan of Ivan Stepanovich Konev, commander of the troops of the 1 of the Ukrainian Front, in January 1945, during the Vistula-Oder operation, the units and formations of the front were to make a swift strike, bypass maneuver and force Oder,” recalls Andrei Panteleevich. “But on the move to force the Oder, through which lay the path to the vital centers of Germany, is a very difficult task. There, on every kilometer of the west bank of the river, the enemy built an 2 – 3 caponier, an 2 – 3 semi-champion and one shelter. They were located in such a way that the entire surface of the water and the eastern shores overlapped with cross and flanking fire. All pillboxes were located on the water edge. Therefore, not capturing enemy pillboxes on the other side, it was impossible to successfully force a water barrier with minimal losses ...

Part of the 13-th Guards Army forced the Oder with the help of improvised means, and somewhere on the ice. Not everywhere ferries passed without loss. But a group of fighters (15 – 16 people), under the command of Sergeant Tulnikov, was fortunate enough to secretly land on the western bank of the night and capture a German soldier from the garrison of one of the long-term firing points (pillboxes). After the interrogation of a prisoner of war it was decided to attack the pillboxes. With sudden raids, the group managed to seize one and then the second dot without resistance. The third dot had to be taken in combat, during which the group lost several soldiers killed and wounded. In the captured fire points as trophies, the brave men got a whole arsenal weapons, ammunition and food. So to hold the positions captured here could be quite a long time. Assessing the situation, the sergeant ordered to prepare to repel the enemy’s counterattack. The team of Tulnikov after capturing the pillboxes immediately put up minefields in a tank-dangerous direction. And on time. Because, recollecting himself, the enemy made desperate attempts to recapture the fortifications. But in vain. Two german tank were blown up by mines, two more fighting vehicles of the enemy were destroyed by the Faustpatrons. Infantry attacks our fighters successfully beat off fire from the captured Spandau machine guns. The enemy lost about 100 people killed and wounded. The stubborn two-day defense of the bridgehead, a handful of soldiers under the command of Sergeant Andrei Tulnikov, ensured the successful landing in the strategically important direction north of Breslau of the units of the 112th Infantry Division of the 13th Guards Army. At the personal request of the commander of the 1st Ukrainian Front, Marshal of the Soviet Union Konev, all participants in the operation to capture and hold the bridgehead were awarded orders, and Sergeant Tulnikov was presented to the rank of Hero of the Soviet Union.

This high rank Tulnikov was awarded by the Decree of the Presidium of the Supreme Soviet of the USSR of April 10 of 1945. The high award was presented to him by the “All-Union Headman” MI. Kalinin. Tulnikov participated in the Victory Parade on Red Square in Moscow in June 1945. He was demobilized with the rank of junior lieutenant.

The Golden Star of the Hero is not the only battle award of Andrei Panteleevich. The Order of the Red Banner, the Red Star and Glory of the III degree, three medals "For Courage", which Tulnikov was awarded during the Great Patriotic War, testify to other feats of arms of the veteran.

“I received baptism of fire in a battle near Voronezh in 1942, where I was wounded for the first time,” recalls Tulnikov. - Later he fought on the Kursk Bulge (Central Front). As a military intelligence officer in the reconnaissance groups, he participated in the performance of command tasks during the Chernigov-Poltava and Lvov-Sandomierz operations. At Lvov, while performing a task in the rear of the enemy, along with three other comrades in the village, Brody was ambushed and captured by the Germans. After three days of torture, two scouts were shot, and me and my other friend were sentenced to be hanged. And here we are standing on the scaffold with the signs “Russian gangster” on the chest and listening to the death sentence. And suddenly from somewhere on the side they hit the Soviet PCA. Fritz and policemen hit by a bullet hit the ground! As it turned out, our intelligence group arrived in time, which made a daring raid on the German escort and freed us. We can say that he was saved by a miracle. But this miracle has a precise definition: front-line friendship and mutual assistance!

Andrei Panteleevich has something to remember. Even today, during meetings with future draftees, students of schools and universities, using examples from his front-line past, teaches young people how to love their homeland, to serve it honestly and wholeheartedly.

A veteran is a participant in a parade on Red Square in Moscow that took place on 9 on May 2005 of the year. He is in a special account with the regional authorities. For example, when Andrey Panteleevich 5 of August of the current year turned 90 years, an entire delegation, including the chairman of the government, the speaker of the State Duma of the Astrakhan region and the chairman of the regional Council of war and labor veterans, congratulated him on his jubilee. By decision of the leadership of the Astrakhan region, secondary school in the village of Prishib of the Enotaevsky district, where the Hero of the Soviet Union Andrei Tulnikov was born, and also the boarding school of the Volga Railway, it was decided to assign the name of this valiant warrior.

Few people today so warmly and sincerely write about our generation, as the main military newspaper "Red Star". But the front-line soldiers need good words and active participation. When a newspaper writes about veterans, how they live today, how they communicate with servicemen and young people, it becomes very pleasant, it means that traditions of transferring experience are preserved, which means that the continuity of generations lives. I wish the journalists and the publishers of Red Star the strength of spirit, optimism, interesting and relevant topics. And to the veterans of the “Red Star” - health and strength for new reports and journalistic discoveries!

Ctrl Enter
Noticed oshЫbku Highlight text and press. Ctrl + Enter
We are
Combat awards of the Russian Federation. Order "For Services to the Fatherland"Conversations with Timofey Panteleevich Punev. “No air force had a bomber similar to the Pe 2.”
11 comments
Information
Dear reader, to leave comments on the publication, you must to register.