Defense for the future. Vladimir Putin summed up the rearmament of the army 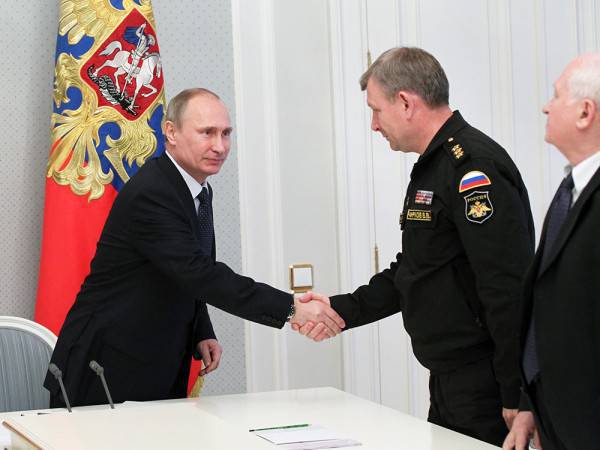 For three days at the end of last week, the president talked in Sochi with senior military officials and leaders of leading defense enterprises. The conversation was principled and sometimes impartial. The state allocates huge funds for the rearmament of the army and fleet, this process should go on efficiently and on time, Vladimir Putin explained. The president decided again to bring together all those responsible for the state defense order for six months to check how his instructions are being implemented.


The president immediately set the pace: two meetings a day. On Friday - the last stage: we started with high-precision weapons, and finished with satellites. Then Putin invited everyone to a working lunch in order to take stock with Deputy Prime Minister Dmitry Rogozin and Defense Minister Sergei Shoigu.

At the first meeting of Friday, the fifth in a row, the head of state focused on high-precision weapons. "It is known - and it is very well known - not only to specialists, but also to the general public that high-precision weapons are becoming an increasingly important factor in non-nuclear deterrence, perhaps even one of the most significant ones," he emphasized.

"Modern precision weapons integrate intelligence systems, control systems, and delivery and destruction systems," all this makes it highly effective. In essence, bearing in mind high accuracy and modern power, this precision weapon is now becoming an alternative to nuclear according to its efficiency, in a number of parameters it simply does not yield to it, "Putin said.

The leaders of the defense enterprises were satisfied and did not hide this. "This year we have concluded all contracts for the manufacture of precision weapons and have already begun to deliver them to the Armed Forces," Vladimir Trusov, the general director of OAO Raduga, reported. The contracting was very successful, and the serial preparation is also very successful, because the Federal Target Program for the Development of the Defense Industry is in operation, the Director General of Tactical Missile Weapons Corporation Boris Obnosov thanked us. “And, of course, without it we would have failed, "he admitted.

- Under the program of development of the defense industry, that is, in fact, we are talking about re-equipment, re-equipment of your own enterprise: how much did you receive? - Putin asked.

“The total program we have for the entire corporation is 64 billion to 2020,” answered Obnosov. Specifically for his enterprise - 5 billion rubles.

The sixth, final meeting of the president devoted to the development of the orbital group of military and dual-purpose spacecraft. “The Russian Armed Forces must be high-tech, meet all the requirements of today and tomorrow’s methods of warfare,” Putin recalled the tasks. “It’s absolutely clear that any actions of the modern Armed Forces will be ineffective without support from space. First of all, it concerns communications, navigation, intelligence and target designation. "

The result can be achieved only with the help of a balanced grouping of military and dual-purpose satellites. This year, it included five spacecraft, before 2015, 11 will also appear in orbit. The test of Angara launch vehicle will begin.

The head of state did not conceal: "In a number of areas we still need to catch up, to restore our technological positions." Problems of the space industry have been repeatedly discussed at a high political level and by the public. “Unfortunately, not in connection with some great new successes, but in connection with a number of failures and failures, because of which Russia suffered significant financial and, most importantly, moral losses,” the president regretted. “Despite stable funding, a number of key projects are floating in time, including those related to ensuring the country's defense,” Putin said.

The president summed up the results of three days at a meeting with the leadership of the Ministry of Defense, the commanders-in-chief of the branches of the Armed Forces, the commanders of combat arms and representatives of defense enterprises. He called the paced good. “The conversation was principled and sometimes even, as they say in such cases, impartial, but we always proceeded from one thing only - from the fact that the assigned tasks should be solved. Solved efficiently and in due time for the country,” the Supreme Commander summed up.

The state provided enormous amounts of money for rearmament. In 2003, the total budget of the Ministry of Defense was 600 billion rubles. In this, he amounted to 2,3 trillion. "The state allocates this money so that the defense capability is provided for a long time, for a long term: for a long historical perspective, "Vladimir Putin recalled.

"This is the first such experience, and he showed that this form of work is in demand. We managed to look at all the problems of the state defense order not only in perspective, but also horizontally to check the clock, to see how the parallel work on the types and kinds of the Armed Forces, enterprises that provide rearmament, "- said the president and offered to continue to work as well. All agreements will be reflected on paper, indicating the performers and deadlines. “And exactly in six months we will gather and see what has been done, what has not been done and for what reasons,” the head of state decided.

“Some tasks of 2013 of the year still have to be brought to their logical conclusion. I hope that this will be fulfilled,” added Vladimir Putin and congratulated everyone on the upcoming New Year.

Ctrl Enter
Noticed oshЫbku Highlight text and press. Ctrl + Enter
We are
Results of the week. "Well, do not change me because of every idiot!"
16 comments
Information
Dear reader, to leave comments on the publication, you must to register.