November 26 2013
102
On the eve of the war in Afghanistan, the USSR had to take part in another conflict. At the very beginning of 1979, a clash took place between the People’s Republic of China and Vietnam, and thanks to the Soviet Union, large-scale hostilities were avoided.


With the coming to power of Deng Xiaoping, relations between China and Vietnam became even more tense. The conclusion of the Soviet-Vietnamese Treaty of Friendship and Cooperation on November 3, 1978, further intensified the friction between Beijing and Hanoi. It approved the provisions on "joint defense", on "joint actions to ensure the security of both countries," as well as the duty to exchange views on important international issues, if they concern the parties to the agreement. Beijing recalled its ambassador and military attache from Hanoi, reduced the number of representatives, interrupted railway communication between the countries and stopped providing economic assistance. The Chinese hoped to control Vietnam with the help of neighboring Kampuchea (present-day Cambodia), where the Khmer Rouge regime at the time was flourishing, led by Paul Hee. But the dictator did not justify the hopes of China: committing massacres, he did not spare anyone, including the Vietnamese community. In December, 1978, Vietnam decided to intervene and support the rebel army. 7 January 1979, the Pol Pot regime, China’s only ally in the region, was overthrown, which caused Beijing to resent. 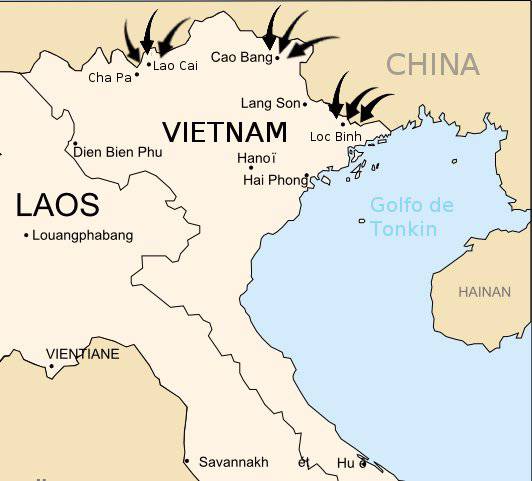 At the end of January, Deng Xiaoping arrived in the United States on a nine-day visit and stated in Washington that Vietnam should “be taught a lesson”. By February, the Chinese leader was already pulling military forces to the border with Vietnam. In total, 29 divisions were deployed at the front, in addition, there was a hidden relocation aviation. On February 16, 1979, Hanoi was formally charged with threatening Chinese territory, and at dawn on February 17, the People’s Liberation Army of China (PLA) invaded the northern provinces of Vietnam.

Deng Xiaoping's government pursued several goals: to undermine the enemy’s defenses, cause economic losses, and seize territory with the provincial centers of Lao Cay, Caobang and Lang Son. But the main goal was to assert control over the region. By starting a war with Vietnam, China defied the Soviet Union. The formal reason was the oppression of the Chinese community in Vietnam. The Chinese were first deprived of Vietnamese citizenship, then they were deprived of the right to have their own business and hold any political posts. In large cities, Chinese trade was closed, and the goods were confiscated. The Chinese living on the border were simply expelled to Chinese territory. The second, more official reason was the invasion of the Vietnamese military ships on the Spratly Islands, which China considered its territory.

As soon as the Soviet Union found out about the attack of China, the main military adviser in Laos, Major General Gaponenko, was sent to Vietnam. The USSR launched a full-scale preparation for possible military action. 6 military districts were brought to alert. Two airborne divisions were sent to the east, which were located on the border with Mongolia. 19 February General of the Army Gennady Obaturov, appointed chief military adviser in Vietnam, arrived in Hanoi on 1979. Together with other Soviet specialists, he studied the situation and advised the Vietnamese command to mobilize army units in the Langshon area. Contributed to the victory and a few Soviet experts. The transport squadron pilots on An-12 carried out the transfer of the army corps from Kampuchea to the Langshon direction, the communications center communications centers of the main military adviser (about 120 people were there from August 1978, and 68 was redeployed after the start of the conflict) provided our advisers with communication, including in the combat area. 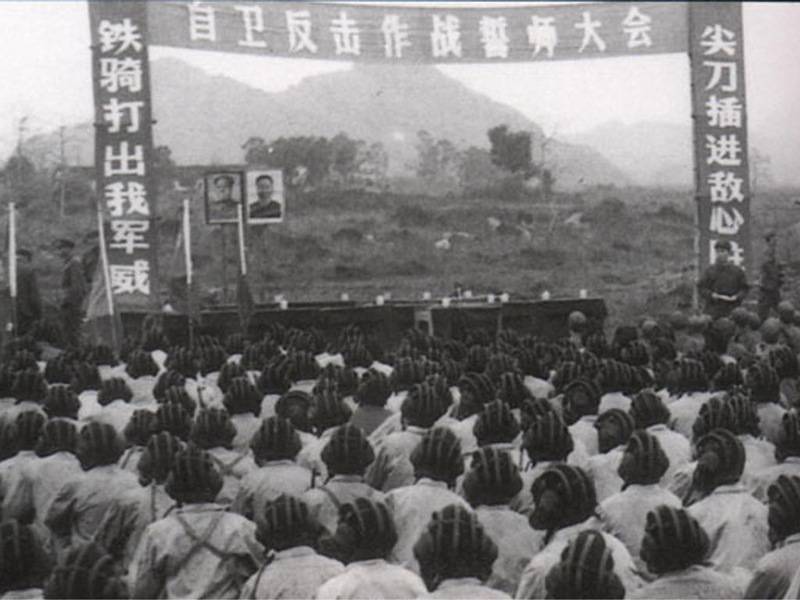 Fully at the expense of units transferred from the Soviet Union, the problem of conducting enemy air reconnaissance on the territory of Vietnam was solved. Parts of the military transport aviation provided air transportation on the territory of Vietnam. Successfully functioned an air bridge between the USSR and Vietnam. As part of the exercises and supplies of NRW, military transport aircraft transported more than 20 thousand personnel, more than 1000 combat equipment, 20 aircraft and helicopters, more than 3 thousand tons of armament, property and ammunition in less than a month.

Military assistance to Vietnam was also very serious due to a sharp increase in its military potential through the supply of equipment and weapons. From the beginning of the conflict to the end of March, more than 400 tanks, infantry combat vehicles and armored personnel carriers, 400 guns and mortars, 50 MLRS Grad, more 100 anti-aircraft systems, 400 portable anti-aircraft complexes and thousands of missiles to them, more than 800 were deployed by sea transport. Hand-held anti-tank grenade launchers, 20 fighters. In addition, special engineering equipment and equipment for the repair of armored vehicles and vehicles and weapons were supplied. All this huge amount of equipment and weapons was allocated and delivered to Vietnam practically within one month.

The exercise began with the mobilization and bringing of troops and forces fleet in full combat readiness. Over 52 thousand people were called up from the reserve. ascribed structure and delivered from the national economy more than 5 thousand cars. The largest were the military exercises in Mongolia, in which six motorized rifle and tank divisions took part, three of which were additionally introduced to the MPR from Siberia and Transbaikalia. In addition, two brigades, up to three aviation divisions, as well as formations and reinforcement units, were involved in events in the territory of this republic. 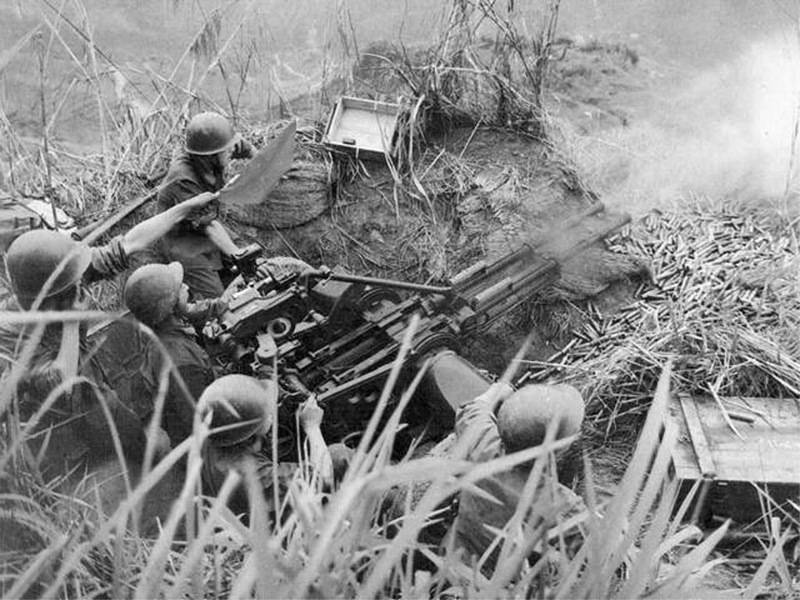 In addition, during this period, military exercises were held in the Far East and East Kazakhstan with the participation of several combined arms and air formations, as well as border troops. In the course of the exercise, combat reconciliation was conducted. Compounds and units in difficult climatic and natural conditions made marches over long distances from Siberia to Mongolia (more than 2 thousand km). The troops regrouped by rail, were transferred by air. In particular, the airborne division from Tula was transported to the Chita region by 5,5 thousand km by military transport aviation on one flight in just two days. The regiments of military aviation from the territory of Ukraine and Belarus were transferred to the airfields of Mongolia.

In the border areas with China, the organization of defense, repelling the enemy invasion, putting counterstrikes and organizing counterattacks were practiced.
The Pacific Fleet was also mobilized. At the end of February there were 13 warships in the South China Sea, and in March there were already 30 ships. In addition, submarines in the Gulf of Tonkin blocked access for warships from other states. The connection of Soviet ships was in the South China Sea until April 1979. The result of their actions was that the Southern Navy of the People's Republic of China did not take part in the attack, despite the fact that it counted 300 ships, although most of them were small ships of coastal defense. In addition, they provided a safe passage and delivery of goods to Vietnam, since during the fighting in the port of Haiphong, which was located in 100-250 km from the front line, were under unloading Soviet ships 5-6, delivered military equipment, including rockets and radar. For the courage and heroism shown in the performance of the task, 36 sailors of the Pacific Fleet squadron were awarded government awards.

An important role was played by the psychological factor. The Chinese Embassy was sent from Moscow to their homeland by train, and on the way to the east they could observe columns of tanks moving towards the border. Exercises of paratroopers from the 106 Guards Airborne Division were also held near the Mongolian-Chinese border in the Gobi Desert. 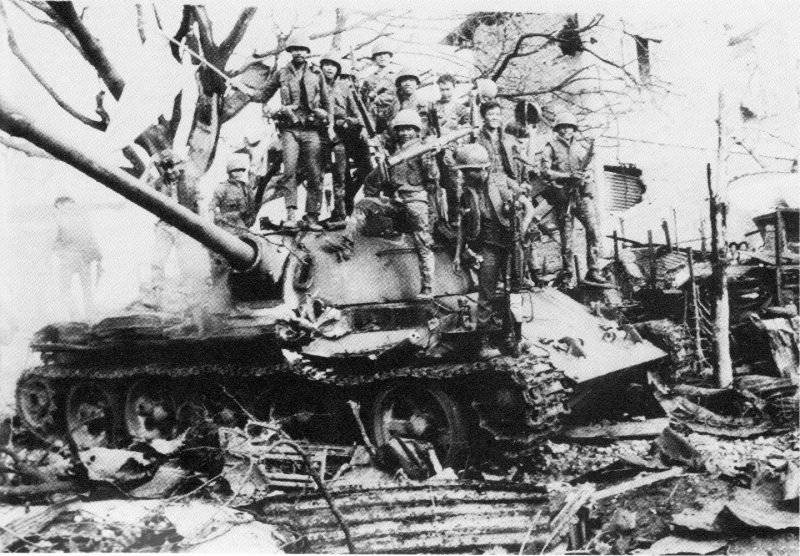 The Chinese army was commanded by General Yang Dezhi. In late February - early March, he mobilized the reserves of the army, and the troops managed to seize the main provincial centers. 18 February, the PLA took Laokai, 2 March - Caobang, 4 March fell Lang Son. The road to Hanoi was open. However, in other directions, the Chinese army pursued setbacks, and soon it was thrown back. In response to the aggression, Vietnam turned to the UN with a protest, although without interrupting diplomatic relations with the PRC. The USSR and Taiwan have accused the United States of supporting China.

2 March The Soviet Union published a statement where it was unequivocally said that if China did not withdraw its troops from Vietnam, it would have to fight on two fronts. The day after the capture of Langshon, 5 March, the Vietnamese authorities announced a general mobilization. At the same time, Beijing officially announced the termination of the offensive and the withdrawal of the Chinese army from the territory of Vietnam. This decision was due to a number of political and military factors, the main of which were: the firm and resolute support of Hanoi from Moscow, which demanded an immediate cessation of the aggression; preparations for the conduct and conduct of the Soviet Union military activities in the East; increased controversy within the Peking leadership during the development of the conflict; negative international reaction; the stubborn resistance of the Vietnamese People’s Army troops, which inflicted heavy losses on the aggressor; the serious shortcomings in the operational-tactical training of commanders of the Chinese troops, in equipping with modern armament and military equipment, difficulties in supply. The withdrawal of the main Chinese forces in all directions was preceded by strong artillery fire raids and demonstrative attacks of the covering forces of the withdrawal. During the withdrawal, massed artillery-mortar fire was widely used, roads were mined, bridges were destroyed, national economic objects were destroyed. The troops finally left the country by the end of March. 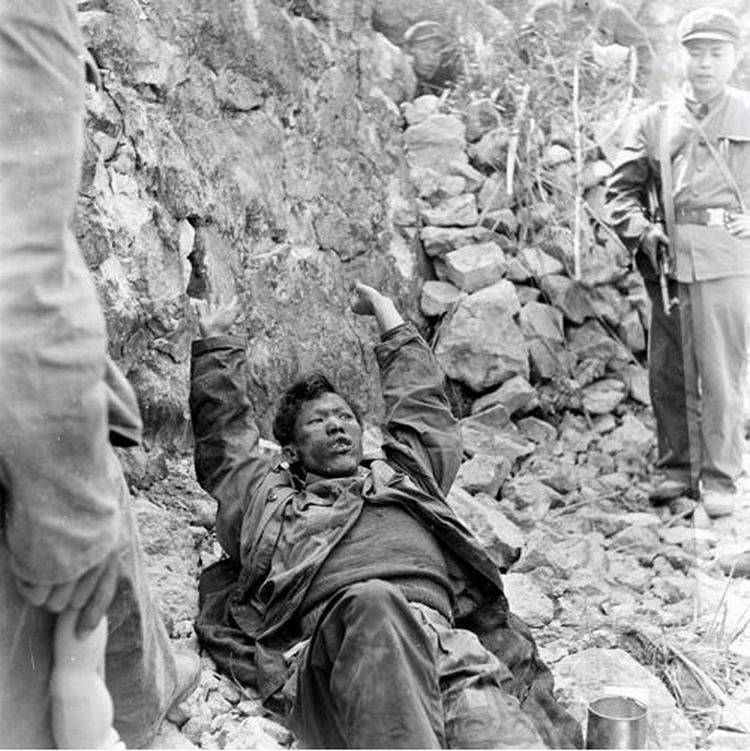 Thus, the Vietnamese-Chinese conflict lasted only 30 days and ended with the victory of Vietnam. According to modern data, the casualties of both sides amounted to 22 thousands of dead and wounded Chinese and about 20 thousands of dead and wounded Vietnamese. The northern provinces of Vietnam were seriously injured, with enormous economic damage. More than 45 thousands of homes of civilians were destroyed, around 1000 schools, over 400 hospitals and 55 industrial enterprises. The conflict was of a land nature, both sides did not use either aircraft or navy. During the confrontation, the shortcomings of the armies of both sides were revealed, which triggered the modernization of the Chinese army.

Ctrl Enter
Noticed oshЫbku Highlight text and press. Ctrl + Enter
We are
South Vietnam. How Saigon regime appeared, developed and collapsedDiplomats of the People's Commissariat of Defense: on the eve and during the war
102 comments
Information
Dear reader, to leave comments on the publication, you must to register.