November 22 2013
26
History domestic fleet he knows many worthy naval officers who forever left their mark on her. One of these officers is Alexander Shabalin, the Rear Admiral of the Soviet Navy, a participant in the Soviet-Finnish War and World War II, twice nominated for the title of Hero of the Soviet Union, and for one year. During the war, he was the commander of an ordinary torpedo boat TKA-12. During the years of World War II, Alexander Shabalin sank 32 warships and enemy vehicles. There were simply no such achievements in the world.


Alexander Osipovich Shabalin - hereditary northerner. He was born 4 in November 1914, in a small village Yudmozero in the Onega district of the Arkhangelsk region in a simple peasant family. Already at 17, he left his home and went to Murmansk, where he entered the fishing trawler "Crab" as a cabin boy. For several years he went on the ships of the Murmansk trawling fleet, was a sailor, studied and became the navigator of the trawler. In 1936, Alexander was drafted into the army, naturally, to serve in the Navy.

Serve Alexander Shabalin began on the Baltic Sea in the training squad, a team of torpedo boats. These were rather unusual and interesting ships. Small, painted gray paint, equipped with motors, filled with explosive power. Quickly enough, Shabalin became the boatswain of a torpedo boat, which helped him to study the device of the vessel to the last screw. After 2, he became the commander of a torpedo boat. He managed to get an officer's rank, despite such a flaw as the lack of "official" education. It is worth noting that in those years the practice was valued no less, and sometimes much more than theory. Military education Shabalin will receive after the end of World War II.

By the beginning of the war, the torpedo boats were not listed as part of the Northern Fleet, only 1 August 1941 from Leningrad to Murmansk by rail was transferred 5 taken from the factory of boats. After conducting a course of combat training and a series of tests, the ships began to go to sea to conduct active combat operations. Despite the harsh climatic conditions of the Soviet Arctic, as well as quite a strong opposition from the Germans, the torpedo boats of the Northern Fleet time and again made bold raids on German communications, causing significant losses to the Germans. 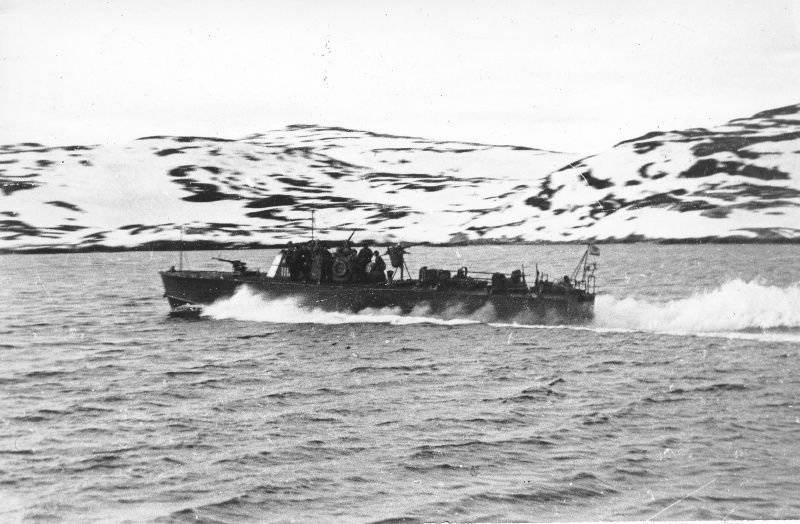 11 September 1941, a torpedo boat "TKA-12", commanded by Junior Lieutenant Shabalin in tandem with "TKA-11", went to intercept a German convoy found at sea. The Soviet boats were able to break through the dense curtain of artillery and machine-gun fire and sent a convoy vessel converted from a fishing trawler to the bottom with a well-aimed torpedo salvo. This was the first victory of the sailors of the North Sea in the outbreak of the war. Literally 3 weeks later, the TKA-12 torpedo boat was able to achieve noticeably greater success by sinking large German transport in the Varanger Fjord, carrying more than 2 thousands of German soldiers and officers to the front, according to some information, they were mountain huntsmen, the elite of the German troops. For this attack, Alexander Shabalin was presented to the Order of Lenin.

The hero used his battle tactics

It is interesting to note the fact that the future twice Hero of the Soviet Union became an officer and commander of a torpedo boat, not having a special higher military education. Alexander Shabalin graduated from the Caspian Higher Naval School only in 1951, in which he not only had the lieutenant's shoulder straps, but also many government awards, including two gold Hero Stars.

The funny thing is that Alexander Shabalin had to learn naval tactics from textbooks, which by that time had already made unique torpedo attacks by Shabalin himself. The attacks of this seabass have always been distinguished by a non-standard approach and unpredictability. No wonder the Germans and his associates called Shabalin "elusive katernik". He had the gift to appear in the most unexpected places, while the enemy did not have time to come round, and inflicted deadly wounds to the Germans with his torpedoes, after which he left his pursuers unscathed.

At the same time in a combat situation, Alexander Shabalin was able to apply not only tactical, but also psychological tricks. It was he who became one of the first to use the technique with the attack of the enemy from his own coast. The meaning of such attacks was as follows. It is known that the crew of any vessel that moves along its shore, on which coastal batteries are located, airfields, and observer posts, are primarily preparing to repel an attack from the sea. It is precisely in the open sea that the commander of the ship, signalmen, the calculations of artillery guns and machine guns are focused. 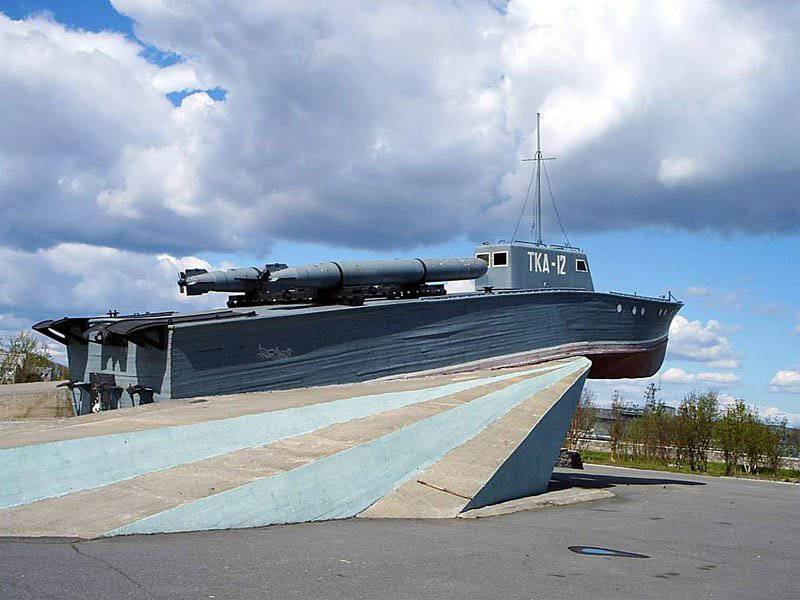 Meanwhile, Shabalin preferred to attack just from the coast, from the side from which he was least expected to see. More than once it happened that in a night battle the torpedo boat fired all its torpedoes and, sinking or damaging the enemy's ships, did not leave the open sea, but again to the enemy shore, hiding in the shadow of high rocks. At the time, the boat even jammed its engines in order not to find its location to the enemy, not only with noise, but also with foam from the working propellers. So, with the engines turned off, the boat and its crew, hiding, waited for the Germans or their allies to get tired of looking for him and only then calmly went home to the base.

In the war, severe exams awaited Shabalin one by one. According to historical sources, he then landed reconnaissance groups on the guarded enemy coast, then in stormy weather he walked with a group of hunting boats to German bases in order to ensure the staging of active minefields on enemy communications.

December 22, 1943 Soviet aviation intelligence reported the discovery of an enemy convoy. The convoy consisted of only 3 transport ships, but their protection was provided by about 20 warships. Apparently, the transported cargo was very valuable for the Germans. In addition, they chose stormy weather for escorting the convoy, hoping that in such weather conditions Soviet hunting boats would not be able to go into the open sea. However, they went out. In the attack on this convoy, 2 torpedoes fired from the Shabalin boat successfully hit the German patrol and destroyer. As a result of this, 2 full-fledged warships of the enemy were sunk in one attack by a small vessel, which was several times smaller than them.

In February, 1944, Lieutenant-Captain Alexander Shabalin was awarded the Star of Hero of the Soviet Union. At that time, the 7 figure stood on the cabin of his torpedo boat, which meant the number of enemy ships he had sunk by that moment. Before that, he managed to send 4 vehicles, 2 fighting ships and 1 submarines to the bottom of the Barents Sea. 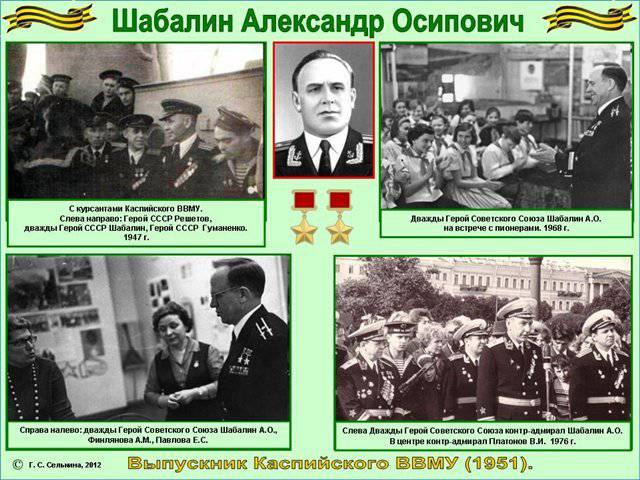 In the first days of October 1944, Shabalin took part in a large-scale Petsamo-Kirkenes offensive operation, which was carried out by the Karelian Front units, as well as by the forces of the Northern Fleet. The purpose of this offensive was the liberation of the northwestern tip of the Kola Peninsula. In order to cut off the branches of the German rangers of the escape route, it was decided to land a large landing force in the Linahamari harbor in a fairly narrow fjord. On a dark night of October 13, 1944 of the year more than 10 torpedo boats with paratroopers on board left the base. The headboat was driven by Alexander Shabalin, who by this time was already at the head of a link of brisk small marine torpedo bombers. The landing operation was completed successfully. The command had no questions about who distinguished himself in those battles, and already on November 5 1944, Shabalin was introduced to the second Gold Star medal.

After the end of the Great Patriotic War, Shabalin graduated from the Caspian Higher Naval School, and in 1955, academic courses for officers, organized at the Naval Academy. All post-war years he was in responsible work as part of the Soviet Navy. In 1969, Alexander Osipovich was given the title of Rear Admiral. From the same year he served as deputy chief of the Naval School to them. M. V. Frunze. For many years this school was a forge of command personnel for the Soviet fleet. Working at the school, he passed all his knowledge, experience and skills to future officers. He always had something to teach and what to tell young people. In 1975, he went to the reserve. The war hero spent his last years in Leningrad, where 16 passed away on January 1982. Shabalina was buried at the Serafimov cemetery.

The memory of the hero is preserved after his death, especially in his homeland. Alexander Shabalin will always remain an honorary citizen of the cities of Onega and Arkhangelsk. In the same place, in Onega, the hero was given a bronze bust, and in the city of Severomorsk in 1983, a memorial complex was opened in the square of Courage, which is dedicated to the memory of the heroes of North Sea, one of the exhibits of this complex is the same torpedo boat TKA-12, on which it sailed Shabalin. In addition, the streets in Arkhangelsk, Murmansk and a number of other cities, the large landing ship (BDK project 775) of the Baltic Fleet, as well as the passenger ship were named after him.

It would be wrong to finish the story without telling about the torpedo boat on which Shabalin sailed. TKA-12 is a Soviet torpedo boat of the type D-3. The full displacement of the boat is 35,7 m, the maximum length is 22,1 m, the width is 3,96 m, and the draft is 1,7 m. The boat was equipped with 3 motor 850 hp, which allowed it to reach speed in the 32 node. The armament of the boat consisted of 2-x 533-mm drag torpedo tubes and 2-x machine guns, he could also take on board up to 12 small depth charges. The crew of the boat consisted of a 9 man. Considering the outstanding military achievements of the TKA-12 boat, this torpedo boat was handed over to the Museum of the Northern Fleet by a special decision of the 14 Marine Chief Staff from June 1945. Therefore, the glorious traditions of the heroic crew continue to live now.