November 21 2013
36
Bitcoin is a digital currency over which there is no government control in any country in the world. This is not just an electronic payment system; This, in fact, collective network money. Approximately 12 of millions of bitcoins distributed among participants of payments “circulates” in the world. The owner of the wallet can exchange virtual currency for ordinary money. In Canada, the first ATM working with Bitcoins has already appeared, you can buy smart phones, books or even real estate for Bitcoins, and at https://assmkedzgorodn7o.onion.lu/ For almost 4 of the month, the Murder Market Portal has been in operation, the organizers of which are raising money to kill politicians. This is not only about Obama or the NSA chief, but about the destruction of the rulers of the whole world.

Bitcoin rate is constantly changing. However, one thing is clear: lately he has been incredibly tall. Analysts indicate that during the year 2013 he rose thirty times. November 20 for Bitcoin 1 were given 576,86 $ or 474,00 euro. A few days earlier, the press wrote about 785 and even 900 dollars for Bitcoin. The virtual currency rate constantly jumps up and down. On the site of this currency, developers warn:

“The price of bitcoins can unpredictably increase or decrease in a short period of time due to the youth of the Bitcoin economy, the novelty of its nature and the illiquidity of the markets. As a result, we do not recommend storing your bitcoin savings. On the contrary, bitcoins should be considered as assets with a high degree of risk. Never keep money in Bitcoins that you cannot afford to lose. If you receive payments in Bitcoins, you can use services that allow you to convert them into local currency. ” 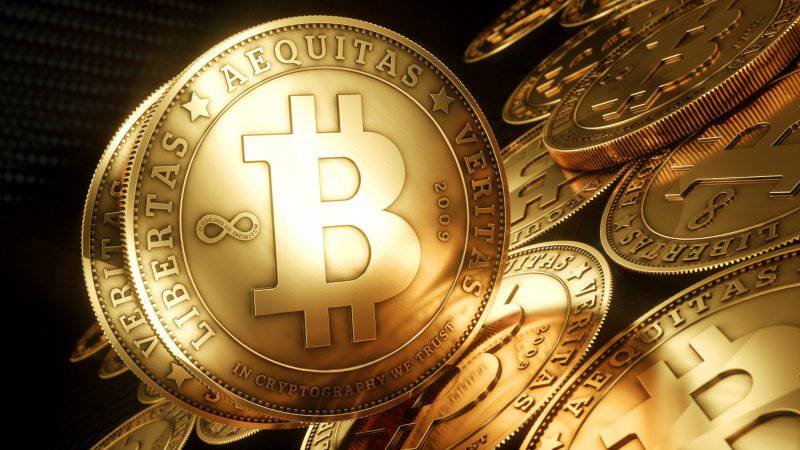 According to open data, the release of bitcoins occurs automatically. New bitcoins are received relatively randomly by those users who use the power of their computer to maintain the operation of the bitcoin system. The volume of issue of bitcoins is algorithmically limited: their total number should not exceed the fixed “hard limit” in 21 million coins. (A bit of irony: not to be confused with the “ceiling” of the US government’s government debt. Bitcoins are not anyone’s debt obligations and cannot be.) Bitcoins form a daily turnover of more than 40000 million dollars in 1 transactions. The total value of bitcoins in turnover exceeds 300 million dollars.

18 November in the US Senate decided how to deal with this virtual currency. After all, a no-brainer that the state wants to control everyone and everything - especially such a state as the American one, famous for its activities in the spirit of “Big Brother” (which in reality is represented by a department called the NSA).

The Senate Committee on National Security and Government Affairs, chaired by Senator Tom Karper, held the first hearings on the future of Bitcoin. It would seem that bitcoin is fine, and the senators do not have to climb here, but neither the Congress nor the government of anarchy in its Kropotkin (or rather, in Bakunin) form will be tolerated. Therefore, according to Washington Post, several senior officials from the Obama administration arrived at the hearing. Their comments about Bitcoins turned out to be surprisingly positive, the correspondent noted.

You shouldn't be surprised. The president is ready to praise the new currency before the government pockets it, imposes taxes and begins to control and place itself in the service. The presidential administration will, until then, extol the new currency, until it finds a “key” to it. In the meantime, she does not have this key. Hence the hearing in the Senate.

They talked about the fact that the Internet has a huge beneficial effect on people's lives, on the importance of innovation, on the possibility of using Bitcoins for criminal and legitimate purposes. From the conversations in the Senate that got into the press, it became clear that the government would like to establish some kind of balance, shifting the new technology towards the rule of law.

Officials from the Obama administration have unanimously expressed concern: oh-ay-ay-yay, Bitcoin is being used for illegal purposes. But then officials stressed that this virtual currency is also used legally and that financial regulators should be careful not to stifle these innovations.

According to BloombergThe US Department of Justice may recognize the Bitcoins as “legal means of exchange.” This was also stated at the hearings in the Senate Committee. And this increases the prospects for greater recognition of virtual currency.

Interestingly, the price of Bitcoin more than doubled after the closure of the illegal Silk Road site five weeks ago, through which people purchased drugs, weapon and other illegal goods for bitcoins.

Bitcoins were introduced in 2008 by a programmer or a group of programmers who consolidated under the name Satoshi Nakamoto. According to the Bitcoincharts website, nearly 12 million Bitcoins are in circulation today.

The bitcoin rate has grown more than 30 once this year.

Bloomberg also cites the opinion of Ben Bernanke, the chairman of the Federal Reserve System. He stated that he has no plans to regulate the currency.

“Despite the fact that the Federal Reserve as a whole monitors developments in the world of virtual currencies and other innovative payment systems, it will not necessarily directly monitor or regulate these innovations or institutions that provide them to the market,” Bernanke wrote in a letter addressed to the Committee.

In different media, noted that the positive statement by Ben Bernanke has strengthened the course of Bitcoin. The growth of currency in recent days, analysts attributed it to the letter of the head of the Fed to Congress.

If in 2010, for 1, bitcoin yielded something around a dollar, today it is worth several hundred dollars.

So far, bitcoin operators have acted anonymously. If the Ministry of Justice, the Fed and the Congress (through the development of new laws) take on bitcoins, then anonymity will have to say goodbye. Information about payments will be disclosed in the same way as is done with other electronic money.

Another thing is that the organizers of the Bitcoin economy act for anonymity:

“Anonymous payments are part of our daily life, because the majority of real transactions are made without confirming the identity. Bitcoin represents a similar freedom for online space. It allows you to pay for services and make donations without constant identity verification. However, it should be noted that ensuring complete anonymity requires some effort. ”

That is, they do not even just speak, but call for certain efforts in this area.

Those comrades who would like to send all the governments of the world to the devil to the devil would use the convenience of anonymity exactly according to the recipes of Bakunin. Probably, Ben Bernanke and Obama's envoys also sing praises to virtual currency, as both the president of the United States and the head of the Fed are on the list of potential victims for killers: anonymous users will pay orders for the killers just in bitcoins ...

Ii. Obama and Bernanke will be killed for Bitcoins

The head of the Fed too late praised Bitcoin.

Andy Greenberg from the magazine "Forbes" I recently received an encrypted letter from Quabatake Sanjuro (a pseudonym was chosen by an anonym named samurai from Kurosawa’s film “The Bodyguard”).

This “Kuwabatake Sanjuro” told the journalist about the Assassination Market website created, a service through which collective anonymous financing of the services of potential killers ready to commit a political assassination takes place. More 40 bitcoins collected for killing Obama and more 124 - for a hitman for Bernanke. 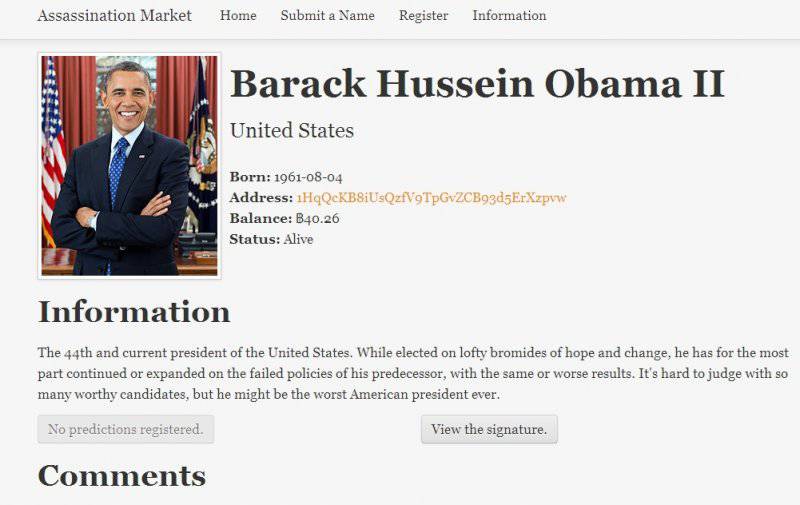 Ben Bernanke is considered the number one enemy of society for many of Bitcoin’s anti-banking system, Greenberg notes.

Sanjuro declared his huge ambitions. He is not going to dwell on some political assassinations. He believes that if the site continues to operate and gain a sufficient number of users, then ultimately enough politicians will be killed so that no one dares to hold certain posts in the future. Anonymous assures that he intends to destroy through the site

"All governments around the world."

To this he adds:

"I think it will change the world for the better." 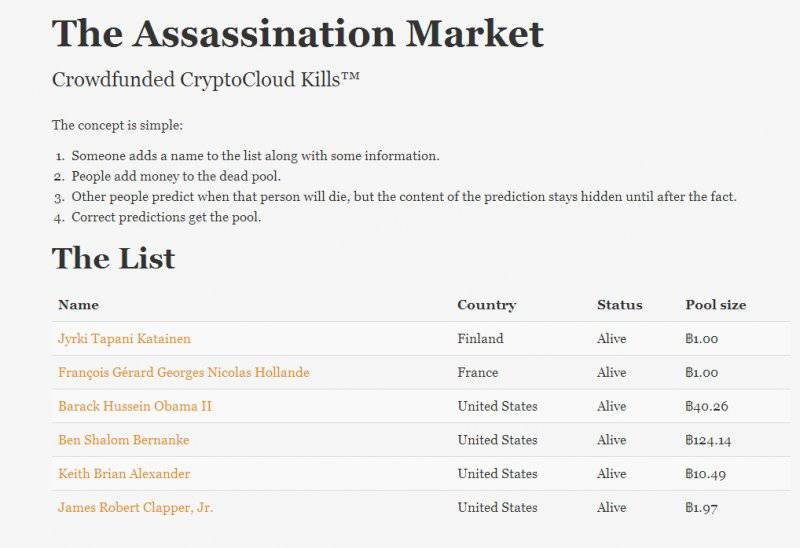 Sanjuro wants to live in a world without wars, nuclear weapons, armies, repression, money manipulation, restrictions on trade and other things. He also claims that if politicians, seeing how some of them were killed, realize that they have lost the war for privacy, the killings can be stopped. Anonymous will then proceed to the "phase of peace, confidentiality and non-interference."

The Forbes correspondent contacted the Secret Service and the FBI and asked if they were investigating the activities of the Murder Market. But both departments declined to comment.

The Homicide Market operates through the anonymous network Tor, designed to prevent user identification. Sanjiuro’s decision to accept only bitcoins is also associated with the intention to protect users, as well as potential killers from finding them through financial transaction tracking mechanisms.

Another interesting point: the activity of Sanjuro is a business. He says that he will keep 1% of payments to killers as a commission.

Sanjuro parries with what he says: aversion of the public will not allow the system to work.

Democracy is not to the liking of Comrade Sanjuro. He believes that the support of a leader by a majority makes him as legitimate as the introduction of slavery.

“I am a crypto-anarchist. A bright future awaits us. ”

We end with the words of Bakunin:

Screenshots - from the site https://assmkedzgorodn7o.onion.lu/.

Ctrl Enter
Noticed oshЫbku Highlight text and press. Ctrl + Enter
We are
Results of the week. "It is not that fever, that is the center of gravity"Geopolitical mosaic: supporters of the Syrian "opposition" held in the UN resolution against Assad, and the website "Murder Market" raises money for killers for Obama and Bernanke
36 comments
Information
Dear reader, to leave comments on the publication, you must to register.