The formation of a new aerobatic team on the Yak-130 has begun. 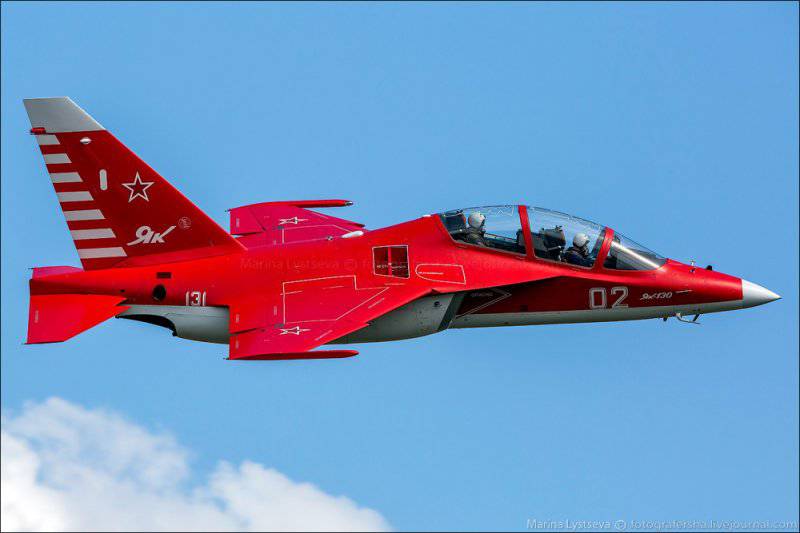 The Russian Air Force has begun the formation of an aerobatic team on the latest Yak-130 combat training aircraft, which are likely to take part in the Victory Parade over Red Square next year, a source in aviation industry.


“The training of the Yak-130 aerobatic team has begun, the task is to participate in the 9 parade of May 2014. Now the work is proceeding in the prescribed manner, ”said the source, RIA reports.News».

A source at the United Aircraft Building Corporation (KLA) also confirmed the information on the training of the group on the Yak-130, noting that the Yakovlev OKB specialists provide comprehensive assistance to the pilots in Borisoglebsk.

“Test pilots of the Yakovlev Design Bureau help pilots to master low altitudes and low speeds when preparing for flight in air formation, they are taught to fly in pairs. Preparation is carried out on serial aircraft. The elements of pilotage, flights in adverse weather conditions are being worked out, ”the source said.

According to him, specific decisions on the number of aircraft in the group and their coloring has not yet been announced. Yakovlev’s specialists are now working on some of the wishes of the Air Force — for example, installing smoke generators and radio equipment on the Yak-130, which will allow aircraft to land at civilian and foreign airports. These innovations will initially be tested on the Yakovlev Design Bureau aircraft, which are not serial.

The fact that in Russia there will be new aerobatic teams, in 2012, spoke Commander-in-Chief of the Russian Air Force, Colonel-General Alexander Zelin.

Currently in Russia there are several aerobatic flying groups.

Aerobatic team "Rus" was established on the basis of the Vyazemsky Aviation Club in 1987 year. In its composition 10 crews: nine group aerobatics and one "soloist". Pilots have a total plaque ranging from 1 thousand 300 to 4 thousand 400 hours.

The Russian Knights aerobatic team was formed on 5 on April 1991 of the year on the basis of the first aviation squadron of the 234 Guards Proskurovsky mixed aviation regiment based at Kubinka airfield near Moscow. Performs group and single pilotage on multi-purpose highly maneuverable fighters Su-27P and Su-27UB.

The uniqueness of the group is that it is the only aerobatic team in the world performing group aerobatics on “heavy fighter” class airplanes, and also that fighters are serial samples.

Another aviation group, the Swifts, formed the 6 of May 1991 of the year. It is part of the Center for the display of aviation equipment named after I. N. Kozhedub. Performs group and single pilotage on multi-purpose highly maneuverable MiG-29 fighters.

In 2006, the Falcon of Russia aerobatic team was established on the basis of the Lipetsk aviation center. Group pilots perform single and group aerobatics on fourth-generation Su-27 fighters. According to some experts, the Falcons of Russia is the only aerobatic team that demonstrates elements of low-level air combat on combat aircraft.

Ctrl Enter
Noticed oshЫbku Highlight text and press. Ctrl + Enter
We are
The first steps towards the revival of the Borisoglebsky Higher Military Aviation School of PilotsAnniversary of the famous Borisoglebsky Aviation School (BVVAUL named after V.P. Chkalov). Report "Military Review"
35 comments
Information
Dear reader, to leave comments on the publication, you must to register.