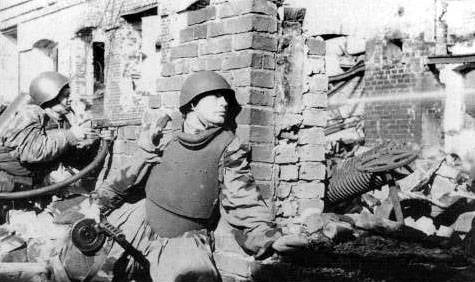 
Perhaps the fighters of these units were obliged to such ignorance that they did not fit into the popular image of the Soviet “soldier-liberator”? Indeed, in the view of the Soviet people, the Red Army soldiers of the Great Patriotic War are exhausted people in dirty overcoats, who are fleeing in an attack after tanks, or tired elderly men smoking on a parapet of a self-rolled trench. After all, it was precisely such shots that were mainly captured by military newsreels.

Probably, in front of people filming newsreels, the main task was to show the fighter of the workers 'and peasants' army, who had been torn off from the machine tool and the plow, and preferably nondescript. Like, what our soldier is - one and a half meters tall, and Hitler is winning! This image perfectly corresponded to the exhausted, muzzled victim of the Stalinist regime. At the end of the 1980-s, filmmakers and post-Soviet historians put a “victim of repression” on a cart, handed a “three-line” without cartridges, sending them towards the fascist armored horde - under the supervision of barrage detachments.

Of course, the reality was somewhat different from the captured newsreels. The Germans themselves entered the Soviet Union on 300's thousands of carts. The ratio in armament also differed from official Soviet data. In terms of the number of automata produced, fascist Europe was inferior to the USSR by 4 times, and by the number of self-loading rifles by 10 times.

Of course, recently the views on the Great Patriotic War have changed. The theme of the “senseless victims” was annoying to the society, and distant crews of armored trains, ninja scouts, frontier guards and other hyperbolized characters began to appear on the screens. As they say, from extreme to extreme. Although it should be noted that the real scouts and frontier guards (as well as marines and paratroopers) were indeed distinguished by excellent training and physical shape. In a country where sport was massively obligatory, “pitching” occurred more often than now.

And only one branch of service was never noticed by the writers eye, although it deserves the most attention. It was the assault engineering-sapper brigades of the Supreme Commander's reserve that were the most numerous and strong among the Soviet special forces during the Second World War.

Most of the warring parties during the war began to realize that the classic infantry is unable to perform many specific tasks. This was the impetus for the creation in Britain of commando battalions, in the United States - units of army rangers, in Germany a part of motorized infantry was reformed into “panzergrenadiers”. Starting its great offensive in 1943, the Red Army was faced with the problem of significant losses during operations to capture German fortifications, as well as in street battles. 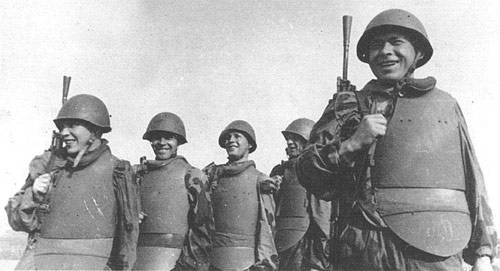 The Germans were the great docks in terms of building fortifications. Long-term emplacements, often made of steel or concrete, covered each other, behind them were self-propelled guns or batteries of anti-tank guns. All approaches to the bunkers were entangled with barbed wire and thickly mined. In the cities, every manhole or basement turned into such firing points. Even the ruins turned into impregnable forts.

Of course, for the capture of such fortifications it was possible to use penalty boxes — it was pointless to lay thousands of soldiers and officers, bringing joy to future accusers of “Stalinism”. It was possible to rush to the embrasure - of course the act is heroic, but absolutely meaningless. In this regard, the Stake, which began to realize that it was time to stop fighting with the help of “cheers” and bayonet, and chose another way.

The very idea of ​​the ShISBr (assault engineering-sapper brigades) was taken from the Germans, or rather from the Kaiser army. In 1916, during the battle for Verdun, the German army used special sapper-assault groups that had special weapons (backpack flamethrowers and light machine guns) and special training courses. The Germans themselves, apparently counting on a "blitzkrieg," forgot about their experience, and then tramped under Sevastopol and in Stalingrad for a considerable time. But the Red Army took it into service.

The first 15 assault brigades began to form in the spring of 1943. The engineering and sapper units of the Workers 'and Peasants' Red Army served as the basis for them, since the new special forces required mainly technically competent specialists, since the range of tasks assigned to them was rather complex and wide.

A company of engineering intelligence first investigated enemy fortifications. The fighters determined the fire power and "architectural strength" of the fortifications. After that, a detailed plan was drawn up, indicating the location of the pillboxes and other firing points, what they are (concrete, earthen or others), what weapons are available. It also indicates the presence of cover, the location of obstacles and minefields. Using these data, developed a plan of assault. 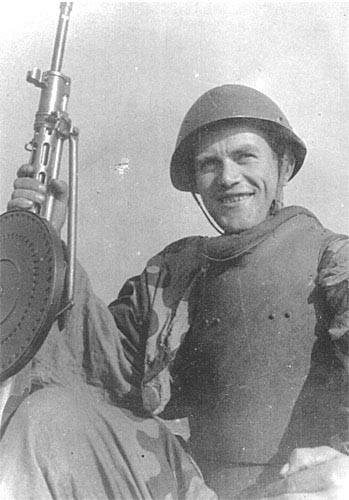 After that, the assault battalions entered into battle (the brigade accounted for up to five). Fighters for Shisbr selected especially carefully. Sinkers, physically weak and soldiers older than 40 years could not get into the brigade.

The high requirements for the candidates were explained simply: the fighter-attack aircraft, bore the burden that was several times greater than the load of a simple infantryman. The standard set of the soldier included a steel bib, providing protection against small fragments, as well as pistol (automatic) bullets, and a bag in which there was a "set of a shooter". Pouches were used to carry increased grenade ammunition, as well as bottles with a “Molotov cocktail,” tossing into window openings or embrasures. From the end of 1943, assault engineering and sapper brigades began using backpack flame throwers.

In addition to traditional machine guns (PPS and PPSH), the soldiers of the assault units were armed with light machine guns and anti-tank guns. Anti-tank rifles were used as large-caliber rifles to suppress firing points.

To teach the personnel to run with this load on their shoulders and minimize its possible losses, the fighters were given tough training. Besides the fact that the ShISBr fighters ran on the obstacle course in full display, battle bullets were whistling over their heads. Thus, the soldiers were taught to "keep a low profile" even before the first battle and to consolidate this skill at the level of instinct. In addition, the personnel engaged in shooting training and demining and explosions. In addition, the training program included hand-to-hand combat, throwing axes, knives and sapper blades.

Training ShISBr were much harder than training the same scouts. After all, the scouts went on mission light, and the main thing for them was not to detect themselves. At the same time, the fighter-attack aircraft had no opportunity to hide in the bushes, and he did not have the opportunity to quietly "slip off". The main goal of ShISBr fighters was not drunk single "tongues", but the most powerful fortifications on the Eastern Front. 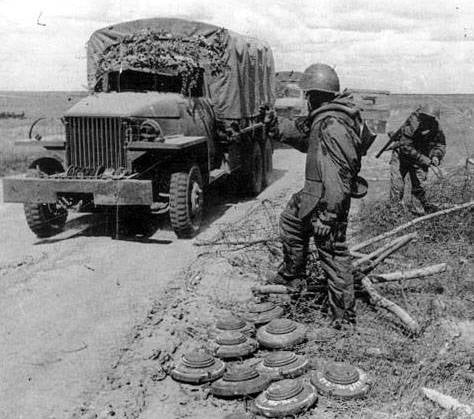 The battle began suddenly, quite often even without artillery preparation and, moreover, shouting “Hurray!”. Detachments of machine gunners and machine-gunners, whose main objective was to cut off German pillboxes from infantry support, quietly passed through previously prepared passages in minefields. Flamethrowers or explosives dealt with the enemy bunker itself.

The charge put into the vent hole made it possible to disable even the most powerful reinforcement. Where the lattice was blocking the way, they acted wittily and mercilessly: several canisters of kerosene were poured inside, and then a match was thrown.

In urban environments, ShISBr fighters differed in the ability to appear suddenly from the unexpected side of German soldiers. Everything was very simple: the assault engineering-sapper brigade literally passed through the walls, using TNT to lay a path. For example, the Germans turned the basement of the house into a bunker. Our fighters came in from the side or behind, blew up the basement wall (and in some cases the floor of the first floor) and then released several jets of flame throwers.

Not the last role in replenishing the arsenal of assault engineering and sapper brigades had the Germans themselves. From the summer of 1943, the “Panzerfaust” (faustpatrony) began to enter the arsenal of the Hitler army, which the retreating Germans left in large quantities. The ShISBra fighters immediately found use for them, because the fayuspatron could be used to penetrate not only armor, but also walls. Interestingly, the Soviet fighters invented a special portable rack that allowed salvo fire from 6 - 10 faustpatron simultaneously.

Also ingenious mobile frames were used to launch Soviet heavy 300 millimeter-missiles M-31. They were brought to the position, fit and produced direct fire. For example, during a battle at Lindenstrasse (Berlin), three such shells were fired at a fortified house. The smoking ruins remaining from the building buried everyone inside. 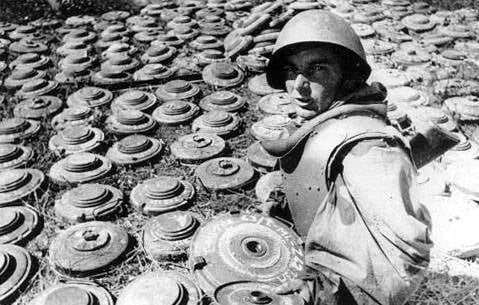 In support of the assault battalions in 1944, various floating conveyors and companies of flame-throwing tanks came. The efficiency and power of the ShIBBR, the number of which by then had increased 20, has increased dramatically.

However, the successes of the assault engineering sapper brigades shown at the very beginning caused the army command real dizziness. The leadership had the wrong opinion that the brigades could do anything and they were sent into battle on all sectors of the front, often without the support of other branches of the military. This was a fatal mistake.

If the German positions were covered with artillery fire, which was not previously suppressed, the assault engineering-sapper brigades were practically powerless. After all, no matter what training the fighters underwent, they were just as vulnerable for German shells as the recruits. The situation was even worse when the Germans fought off their positions with a tank counterattack — in this case the special forces suffered huge losses. Only in December, 1943. The Stavka established strict regulations for the use of assault brigades: now the ShISBr was necessarily supported by artillery, auxiliary infantry and tanks.

The vanguard of the assault engineering brigade was a company of mine clearance, including one company of mine detection dogs. They followed the ShISBr and cleared the main passes for the advancing army (the final clearance of the area lay on the shoulders of the rear engineer units). Minerals also often used steel bibs - we know, sappers sometimes make mistakes, and two-millimeter steel could protect them when small anti-personnel mines exploded. It was at least some kind of cover for the abdomen and chest.

Golden pages in stories Assault engineering and sapper brigades began fighting in Konigsberg and Berlin, as well as the seizure of the fortifications of the Kwantung Army. According to military analysts, without engineering assault special forces, these battles would be delayed, and the Red Army would lose much more fighters. 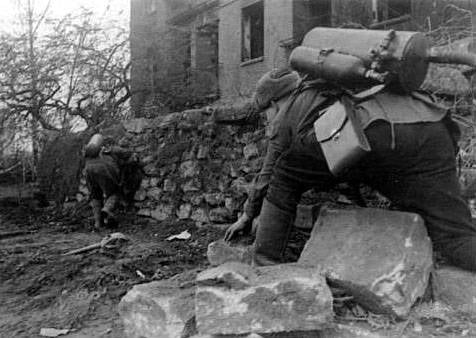 But, unfortunately, in 1946, the main part of the assault engineering-sapper brigades was demobilized, and then they were disbanded one by one. At first, this was promoted by the confidence of the military leadership that the Third World War would be won thanks to the lightning strike of the Soviet tank armies. And after the appearance of nuclear weapons in the General Staff of the USSR they began to believe that the enemy would be destroyed by an atomic bomb. Apparently, the old marshals did not think that if something survived during a nuclear cataclysm, it would be underground forts and bunkers. “Open” them could, perhaps, only assault engineering and sapper brigades.

The unique Soviet special purpose unit was simply forgotten - so that the next generations did not even know about its existence. So it was simply erased one of the most glorious and interesting pages of the Great Patriotic War.
Ctrl Enter
Noticed oshЫbku Highlight text and press. Ctrl + Enter
We are
Diplomats of the People's Commissariat of Defense: on the eve and during the warMyths of the Great Patriotic. Papier mache helmet
91 comment
Information
Dear reader, to leave comments on the publication, you must to register.