UAZ with the engine of the aircraft? Exactly!

November 20 2013
18
What happens if you put an airplane engine on a car? In the imagination, racing cars immediately appear, where speed records are set somewhere on the dried salt lake Bonneville.


However, there is a more rational and practical use, and the car can be used much more affordable. Look at the photo: inside this slightly unusual UAZ a real gas turbine engine is installed. Same as on airplanes. 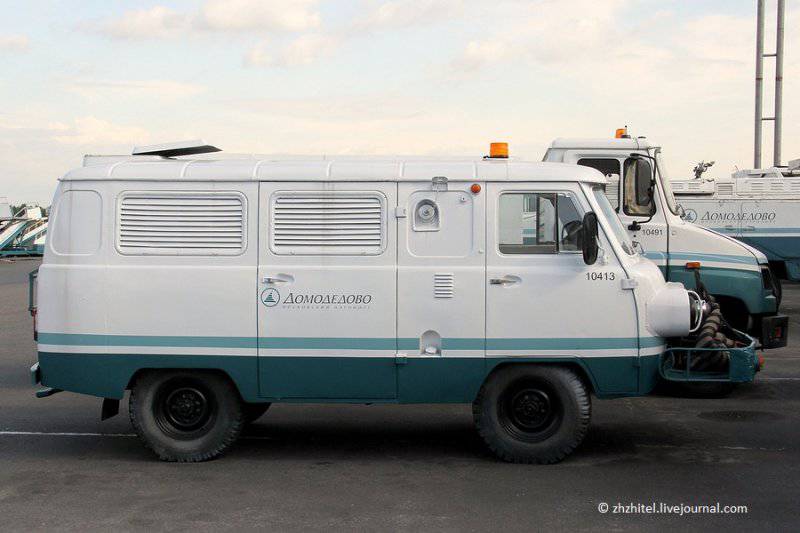 2. The first thing that catches your eye is the front bumper, which serves as a corrugated hose tray, unusual projections under the headlights. The most attentive will notice a raised neck right behind the right door, although there is one more below, like all normal UAZ vehicles. 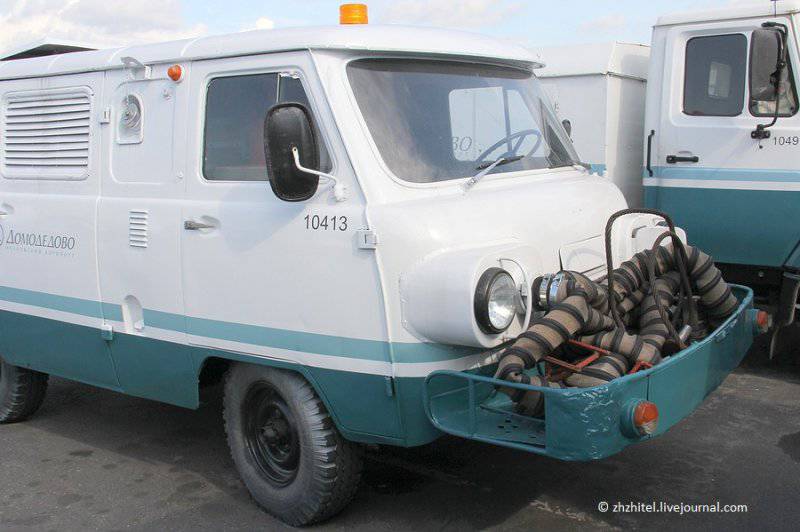 3. Taking advantage of the hospitality of the airport staff, we open the cabin door. This is where the most interesting lies.
Immediately after the driver installed a huge fuel tank. Behind the fuel tank is some kind of device with a bunch of wires, tubes and hoses. 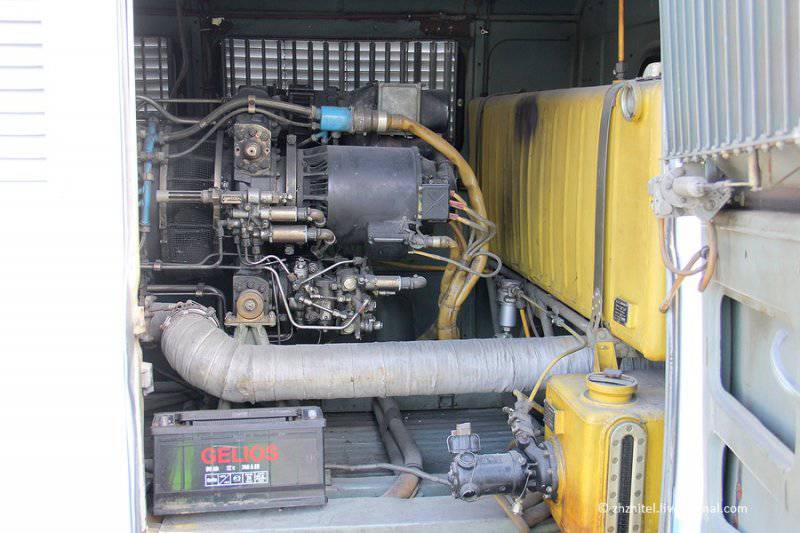 4. The entire cabin of the UAZ car is occupied by a gas turbine engine. What is he doing here? Maybe this is a spare part for repair? No, obviously the engine is connected and can work. Someone decided to set a speed record among UAZ? Also no. 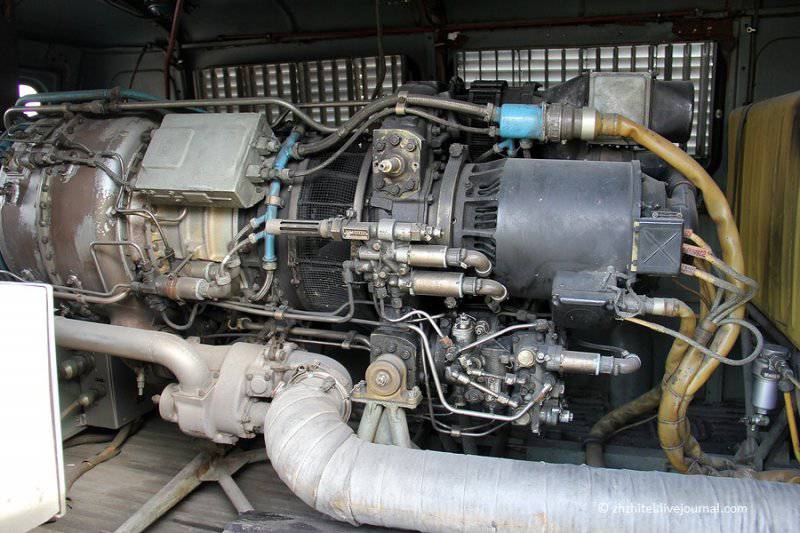 5. Let's take a look at the cabin. To the right of the driver, there is such a control panel for all this farming. So, a little clears up, obviously the engine can rotate the generators. But it is unlikely that in order to make a mobile power station such a complex structure would be built. Correctly, this UAZ has more important tasks besides power generation. 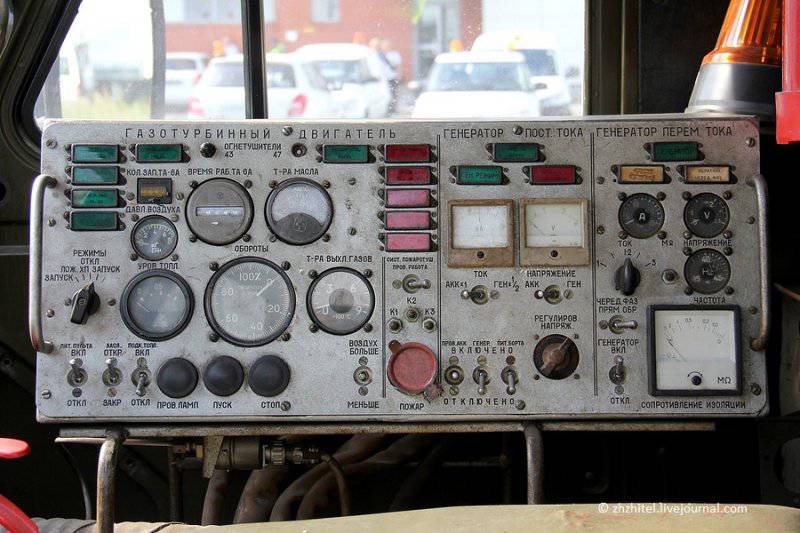 6. Leave the cabin for a while and walk along the airfield. By the way, about electricity, our guess was confirmed. See the power outlet near the headlamp? 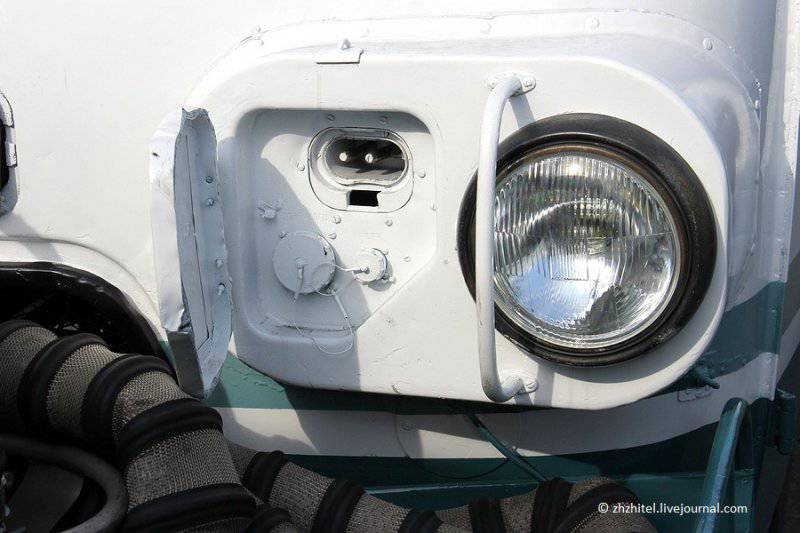 7. Everyone knows that the plane needs engines to fly. On most modern aircraft, they are located on the wings. Most often they are two, like this Boeing-737, or four, like the Boeing-747 or the giant Airbus A-380. But in fact, there are not only main engines on planes. In order for the parking system to work hydraulic systems, air conditioning, electricity and other aircraft systems were provided, it would be extremely irrational to launch powerful and voracious main engines. Therefore, the aircraft has a smaller engine - an auxiliary power unit, abbreviated APU. Usually it is located in the tail of the liner. 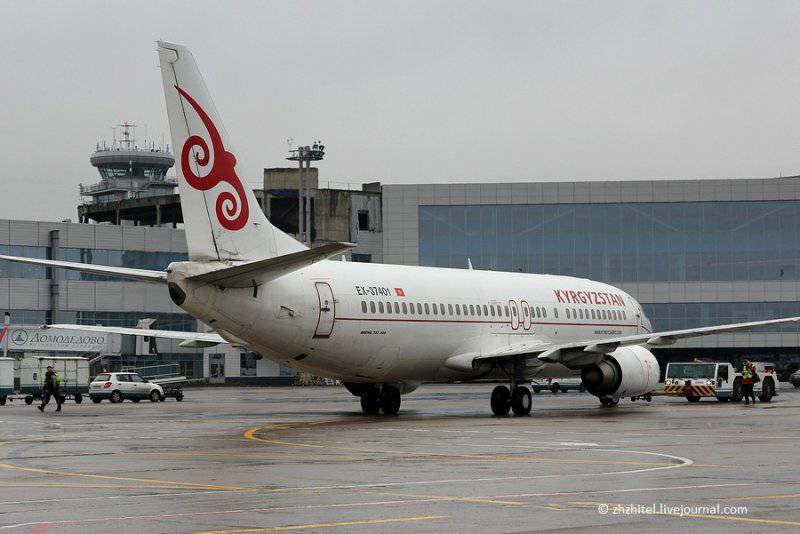 8. Now the plane is towed by a tractor. The main engines are not running, but it is clear that the APU is working. Do you see a stream of exhaust gases? 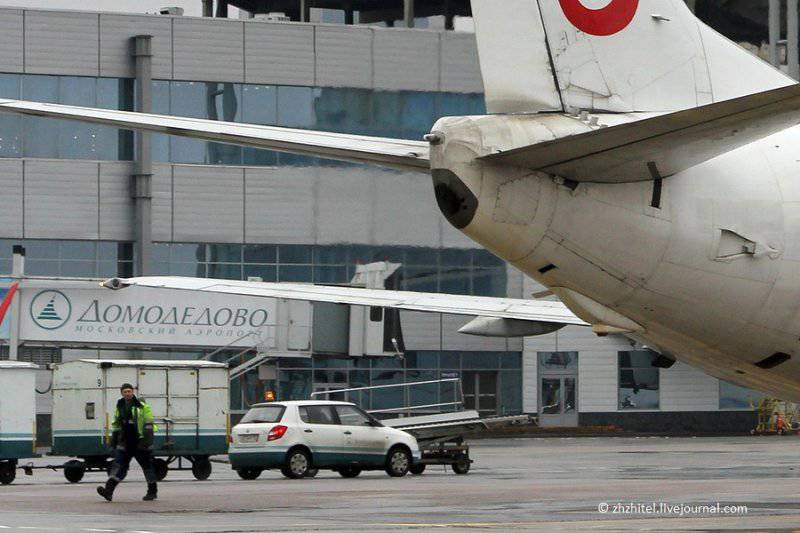 9. The APU is used on virtually all types of aircraft to provide energy to all systems, as well as to start the main engines. Look closely, in almost all aircraft you will see a small hole in the back - this is the APU nozzle. 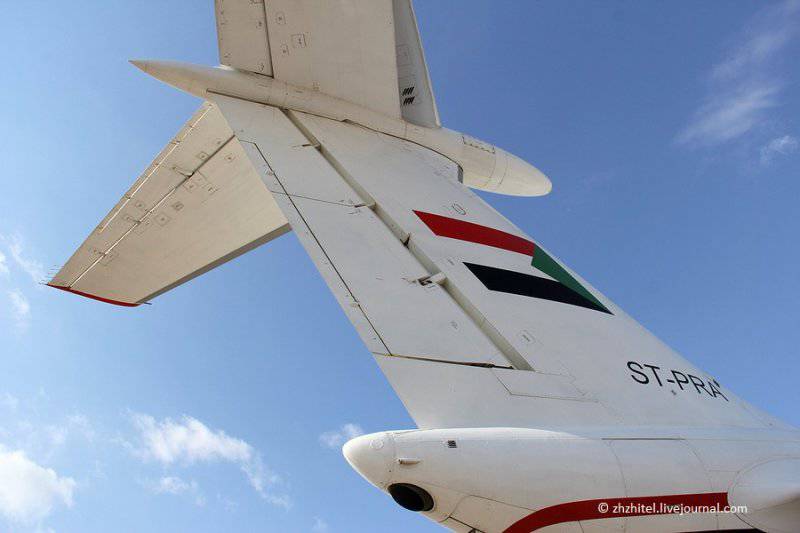 10. Why it is impossible to put any engine easier or a bunch of batteries and a starter like in a car? Of course, the point is the enormous power that is required on the plane. Engines are usually started by a stream of compressed air, which is produced by the turbine. In addition, the APU rotates the generators and can supply air to the salon, of course, not as hot as it leaves the nozzle. 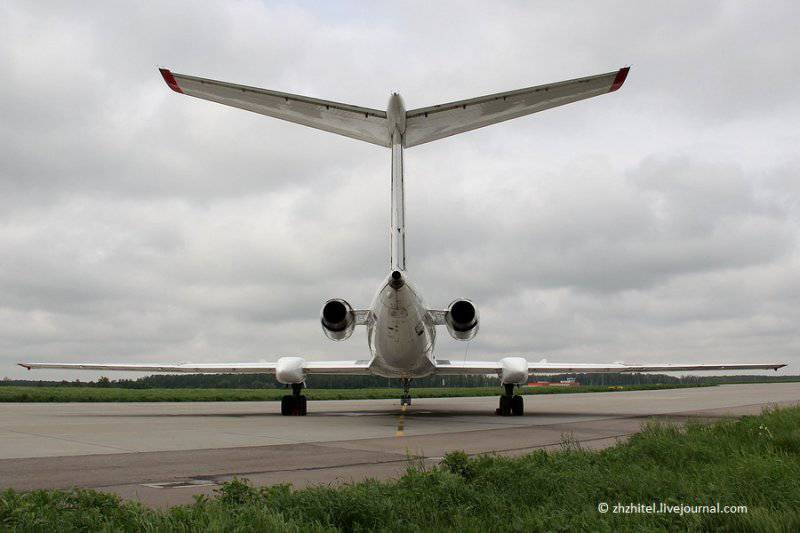 11. Now it becomes clear the purpose of these hoses and this UAZ. The auxiliary power unit may fail, or it may be necessary to provide power, or to quickly warm up the plane after a long winter stay. In these and other cases, the UAZ with a gas turbine engine in the cabin will come to the rescue. By the way, he does not drive at all quickly - the speed of movement on the airfield of the entire 30 km / h, not more. Why so slow? Firstly, for security reasons, secondly, the weight is almost 3 tons. 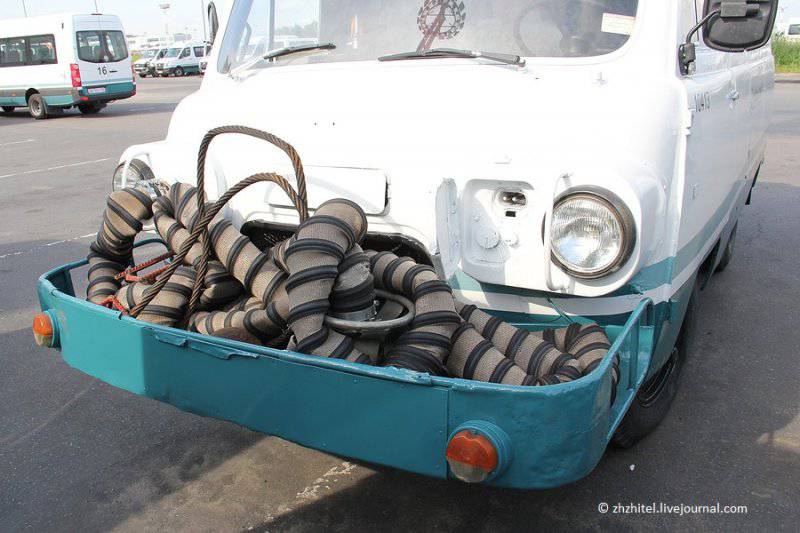 The air launch unit is designed to launch gas turbine aviation engines with hot compressed air and to power the on-board equipment of aircraft with direct and alternating current at the time of launch.

The unit is mounted on the base of the UAZ-37411 vehicle in which are placed:

power point
suction and exhaust system
air system
fire protection system
electrical equipment
means of communication.
The unit can operate at temperatures from -50 ° C to + 50 ° C and relative humidity to 98%.

The power plant and lubrication system is a gas turbine, single-shaft with air extraction behind the compressor, with a TA-6А engine. The unit is equipped with an autonomous fuel supply system for the engine TA-6А. The same engine is used as an auxiliary power unit for Tu-154, Il-62М, Il-76 and Tu-22М, An-22А aircraft.

Total power at generator mode (without air supply), kVA: up to 45
including DC, kW: up to 6.

12. So if you see this strange bug-eyed UAZ at the airport, you know, this is a very important car. 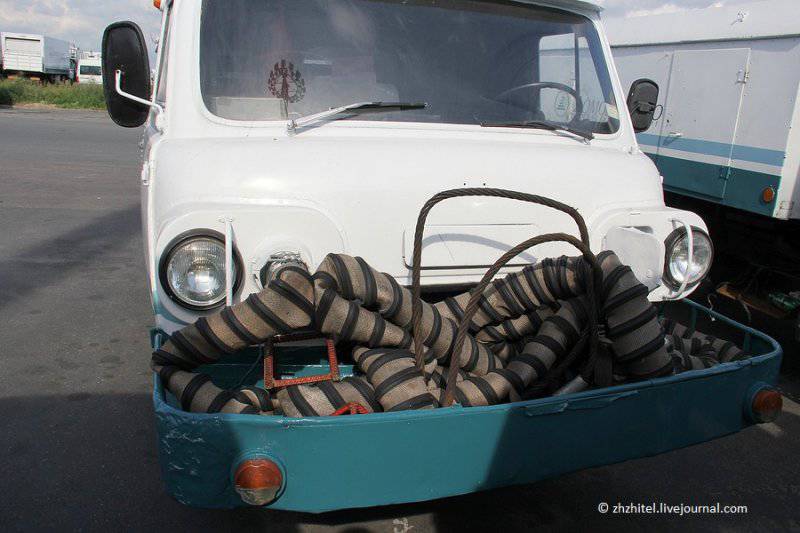 Thank you for the tour and assistance in writing a report on the staff of Domodedovo Airport, the most hospitable airport for Russia.

Ctrl Enter
Noticed oshЫbku Highlight text and press. Ctrl + Enter
We are
Plantations "Carnations" and "Cornflowers". We found in the city a huge arsenal of artillery and small arms, including trophy
18 comments
Information
Dear reader, to leave comments on the publication, you must to register.