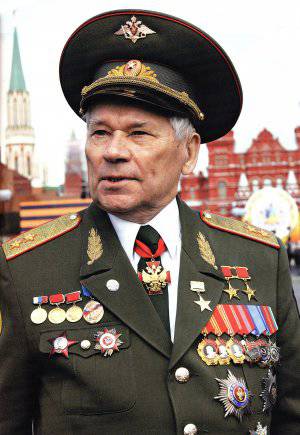 The legendary gunsmith Mikhail Kalashnikov will celebrate his birthday with his family and close friends. The Kalashnikov Concern, part of Rostec State Corporation, congratulates the chief designer of rifle weapons Concern with 94-th birthday.


The general director of the Kalashnikov concern, Konstantin Busygin, emphasized the importance of Mikhail Kalashnikov’s contribution to history Russia in its congratulations:

From the entire team of the Kalashnikov Concern and from myself I personally congratulate you on your birthday! Your birthday is also a holiday of all Russians, for whom your name has become a symbol of a whole arms era. To the factory and its designers, it still remains a guiding star - your invention is equal, your example is a guide for the younger generation of gunsmiths.

Your entire life journey is an example of true valor, honor, selfless labor and patriotism. The weapons you have created for more than half a century remain unsurpassed in their simplicity, reliability and dependability. Your unique talent, your brilliant achievements have greatly contributed to strengthening the defense and authority of our state in the world arena.

Mikhail Timofeevich, we are proud to have the opportunity to work with you side by side, to learn from your experience and wisdom. The entire group of the group is grateful to you for honoring the plant with the honor of bearing your name, to create new, modern weapons under the “Kalashnikov” brand. Your patriotism, faith in the successful future of the enterprise, your support and active participation in the life of the concern admire and inspire us to new achievements!

We sincerely wish you good health, strength and optimism! Happiness and well-being to you and your loved ones! We love and appreciate you. ”

According to the referent, a well-known gunsmith Sergei Nosachev, Mikhail Kalashnikov, are congratulated by representatives of government agencies, leaders of defense enterprises, as well as ordinary citizens from all corners of Russia and the world. Kalashnikov carefully acquainted with all the congratulations - such attention inspires him and adds strength.

The opening of the new museum complex of Mikhail Kalashnikov in the village of Kurya, Altai Territory, in the home of the gunsmith, was timed to coincide with the 94 birthday of the legendary designer. The opening of the museum will take place on November 15 2013, the grandson of the designer Mikhail Kalashnikov and his family will take part in it.

Concern "Kalashnikov" (formerly NGO "Izhmash") - the largest Russian manufacturer of automatic combat and sniper weapons, guided artillery shells, as well as a wide range of civilian products - hunting rifles, sporting rifles, machine tools and tools. The company was founded in 1807. Included in Rostec State Corporation. Kalashnikov united the largest state enterprises of the Russian rifle industry (NPO Izhmash and Izhevsk Mechanical Plant OJSC). In the future, the concern will include the Vyatsko-Polyansky Machine-Building Plant "Molot", the Koshkin Design Bureau, and the Progress NITI. The products are shipped to 27 countries of the world, including the USA, the UK, Germany, Norway, Italy, Canada, Kazakhstan and Thailand.

Russian Technologies State Corporation (Rostec) - Russian corporation, established in 2007 year to promote the development, production and export of high-tech industrial products for civil and military purposes. It includes 663 organizations, of which 8 holding companies in the defense industry complex and 5 - in civilian industries are currently formed. Rostec organizations are located on the territory of 60 subjects of the Russian Federation and supply products to the markets of more than 70 countries. Rostec's revenue in 2012 amounted to 931 billion rubles, net profit - 38,5 billion rubles. Tax deductions to budgets of all levels exceeded 109 billion rubles.

Ctrl Enter
Noticed oshЫbku Highlight text and press. Ctrl + Enter
We are
Concern "Kalashnikov" modernizes production and expands the range of products
28 comments
Information
Dear reader, to leave comments on the publication, you must to register.