November 12 2013
37
The Israeli information portal DEBKAfile reports that at the end of October 2013 was in Cairo to hold secret talks with high-ranking Egyptian military visited by a Russian delegation led by the Deputy Chief of the General Staff of the Russian Armed Forces and Lieutenant-General Vyacheslav Kondrashov. In particular, General Kondrashov met with the Egyptian military leadership, where they discussed the list of weapons that Egypt would like to buy in Russia.


The Israeli newspaper Yediot Ahronot, citing Egyptian military sources, writes that "this visit of the Russian military is not intended to demonstrate Egypt’s refusal from close ties with the West." Nevertheless, the Egyptians themselves comment in the press that they “want to cooperate more actively with other countries, for example, with Russia,” against the background of the official announcement of the American administration about partial reduction of military aid to Egypt.

For the first time since 1972, when Soviet military advisers at the request of President Anwar Sadat left Egypt, there are reports of Egypt’s possible acquisition of Russian weapons. According to DEBKAfile, the Egyptian side expressed the wish for Russia to prove its intention to restore close bilateral relations by supplying weapons that the United States refused to supply.

Earlier in October 2013, the Obama administration froze the supply of 4 Lockheed Martin F-16 fighters, 10 Boeing AH-64 Apache attack helicopters and 125 assembly kits tanks General Dynamics Land Systems M1A1, along with a tranche of $ 260 million from the annual $ 1,3 billion of military assistance (Egypt is the second largest recipient of US military assistance after Israel).

According to DEBKAfile, Cairo is most of all allegedly interested in receiving intercontinental medium-range ballistic missiles that can hit targets in most countries of the Middle East and Iran. The Israeli site makes the assumption that the Egyptians most likely meant a mobile modification of the SS-25 (Topol-M) missile complex. P.2 believes that if we talk about missiles, then we could rather talk about Iskander-E OTRK, which has been actively promoted to the region in recent years.

According to DEBKAfile, the director of the Russian-Egyptian rapprochement is Saudi Arabia. According to DEBKAfile, the Saudi side intends to distance itself from Washington and carry along the Egyptian military, led by defense minister al-Sissi. The site claims that a big deal for the supply of Russian arms to Egypt was agreed upon during the July visit to Moscow of Saudi Prince Bandar and his meeting with President Putin - apparently with payment due to Saudi funds.

According to DEBKAfile, during the visit of the GRU Chief, the Egyptian side was sent a request for the deployment of a Russian naval base, since the MTO post in Syrian Tartus, firstly, is not suitable for this role, and secondly, Russia may be lost. DEBKAfile believes that since the 16 ships of the Russian Navy, including Peter the Great, Varyag and Moscow, are now in the Mediterranean, it would be much more convenient to have such forces in the presence of a base.

DEBKAfile names four possible points where such a base could be created: the port of Alexandria, the port of Dumyat on the eastern arm of the Nile, Port Said at the confluence of the Suez Canal into the sea and Rosetta (Rashid) on the western arm of the Nile, 65 km east of Alexandria .
According to the Israeli site, the appearance of a Russian naval base in any of these four points gives Russia control over the world's most important transport artery, i.e. Suez Canal. Which, moreover, is used by the United States, whose fleet is present both in the Mediterranean Sea and in the Persian Gulf.

At the same time, Moscow, according to DEBKAfile, is ready to offer Cairo long-term loans to finance the package. This would save Egypt from having to look for money to pay for supplies and not turn to Saudi Arabia and the United Arab Emirates for help.

Against the background of sharply increased Russian-Egyptian contacts, the unexpected recent visit by US Secretary of State John Kerry to Cairo to "strengthen ties with the main ally in the region, as well as to make sure that Egypt is moving towards the restoration of democracy" looks remarkable. During the visit, John Kerry held talks with interim President Adley Mansour, Foreign Minister Nabil Fahmy, as well as the country's defense minister Abdel Fattah Al-Sissi. At a press conference, Kerry said that the US authorities intend to continue cooperation with the Egyptian interim government. 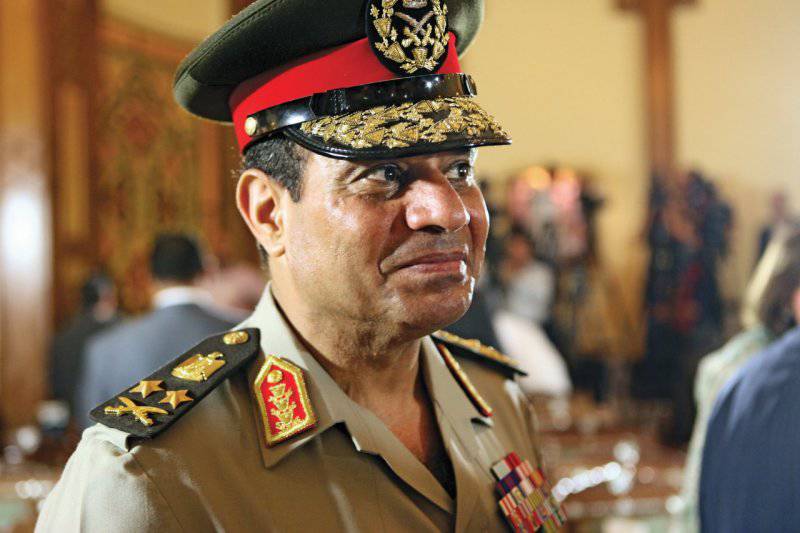 All this is happening against the background of the trial against the former president of Egypt, initiated as part of the investigation into the death of demonstrators outside the presidential palace at the end of 2012. stories Of Egypt. At the end of August, a state of emergency was introduced in the country, as a result of mass clashes between Mursi’s supporters and law enforcement agencies. Now Islamists are threatening to disrupt court sessions with desperate protests. Mursi and the Muslim Brotherhood are charged with a list of charges, if he and the other defendants in the case are found guilty, they face life imprisonment or even the death penalty. The authorities are intensively preparing for possible unrest, while supporters of the Islamists, stating that they do not recognize the jurisdiction of the court, are planning protest actions and even disrupting court hearings.

Washington’s relations with Cairo have also deteriorated noticeably lately. The Egyptians blamed the US administration for the overt support of the Muslim Brotherhood. Immediately after the overthrow of Mursi, in July of this year, the administration of Barack Obama announced the cancellation of joint annual exercises, the suspension of supplies to Egypt of military equipment and financial assistance. According to the press, during his visit, the US Secretary of State explained to the Egyptian partners that "a temporary reduction in US aid to Cairo is not a punishment of Egypt, but actions dictated by US law." It is also reported that he conveyed to the Egyptian President "a message from Barack Obama proposing to intensify the dialogue between the two countries."

Presumably, the recent visit to Cairo and Riyadh by the US Secretary of State was also connected with an attempt to prevent them from coming closer to Moscow in the context of the upcoming meeting in Cairo in mid-November in the format of two plus two foreign and defense ministers of Russia and Egypt.

According to DEBKAfile, the specifics of the visit of Secretary of State Kerry was his intention to meet with representatives of the entire political spectrum of Egypt, including, of course, the Muslim Brotherhood and other opposition groups. This probably weakens the position of the United States, since the delegation headed by the head of the GRU of the General Staff of the Russian Federation did not show plans to meet with someone outside the military, in the center of which is the Egyptian Minister of Defense.

Ctrl Enter
Noticed a mistake Highlight text and press. Ctrl + Enter
We are
What you didn't want to know about England
37 comments
Information
Dear reader, to leave comments on the publication, you must to register.