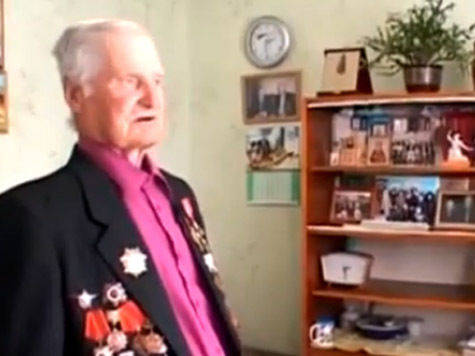 The legendary soldier of the Great Patriotic War, the gentleman of many military and labor awards, died 4 November.


During the four years of the war, Alexei Skurlatov was considered to be killed at the front three times; a funeral came to the parent’s house twice. Russian soldier Alexey Skurlatov reached Bulgaria and returned home in November 1946.

Alexey Skurlatov, forever imprinted in the image of the Soviet warrior-winner Alyosha, whose monument was erected in Bulgarian Plovdiv, volunteered to the front in September 1941 of the year. Baptism of fire took near Moscow near the village of Kryukovo. During the four years of the war, Alexei Skurlatov was considered to be killed at the front three times; a funeral came to the parent’s house twice. Russian soldier Alexey Skurlatov reached Bulgaria and returned home in November 1946. During the war, he participated in the Battle of Kursk. Among the awards - the Order of the Red Star, the medal "For Courage", "For the victory over Germany in the Great Patriotic War 1941-1945."

It is noteworthy that Sergeant Skurlatov was introduced to the Order of the Red Star twice - in February and September 1944. But they awarded him only one - for the September exploits. A hitch came out with the February award. However, the award sheet of Sergeant Skurlatov, the intelligence officer of the 3rd Division of the 234th Artillery Regiment of the 188th Rifle Nizhnedneprovsk Red Banner Division, dated February 8, 1944, was preserved: “On January 30.01.44, 30.01.44, Comrade Skurlatov showed courage and courage during the breakthrough of the enemy’s defense. Moving in battle formations of the infantry and not paying attention to shelling, did not stop monitoring the enemy for a minute, timely detecting his firing points. During the offensive from 03.02.44/XNUMX/XNUMX to XNUMX/XNUMX/XNUMX they discovered: an artillery battery, an easel and a light machine gun of the enemy, which were destroyed by the fire of the division on a reconnaissance tip. At the time of the counterattack of the infantry and tanks Skurlatov adversary from his personal weapons destroyed two German soldiers. Being wounded, he refused to leave the battlefield, but continued to fire at the enemy even more intensively. ”

After the front, returning to his native land, he worked as a foreman of the MTS, a combiner, a mechanic-fitter, a senior engineer, a master of the motor section. In 1983, he retired, but for a long time he worked as a mechanic at the Ovchinnikovsky repair plant. A well-deserved military award — the second order of the Red Star — found the hero in the year of his jubilee. December 25 2012 in the newly built school in Nalobikh Governor of the Altai Territory Alexander Karlin presented the order to the former front-line intelligence officer Alexei Ivanovich Skurlatov. The solemn event took place in the Museum of the Soldier of the Great War. Among its participants were not only a veteran and his guests, but also young residents of the village - museum guides and cadets of the military-patriotic club "Irbis".

It should be noted that the Governor Alexander Karlin and the cadets of the military-patriotic clubs of the Altai Territory Alexei Ivanovich Skurlatov’s open hospitality house often visited - they remembered his military background, advised on what needed to be done to make life in our region more comfortable.

In the year of the anniversary, the highest award of our region, the Order of Merit for the Altai Territory, I degree, was added to the military and labor awards of Alexei Skurlatov.

The legendary Russian soldier Alexey Skurlatov will be buried in his homeland - in the village of Nalobikh of the Altai Territory.

Ctrl Enter
Noticed oshЫbku Highlight text and press. Ctrl + Enter
We are
Famous veteran Alesha was awarded the order in 68 yearsThe legendary scout, who became the prototype of "Alyosha", decided to hand over the order, which was forgotten 68 years ago
18 comments
Information
Dear reader, to leave comments on the publication, you must to register.