The border of Kyrgyzstan and Uzbekistan: the disputed land and the prospects for appeasement 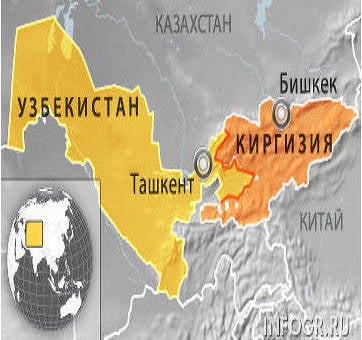 On the border between Kyrgyzstan and Uzbekistan - a new series of conflicts. The reason for one of them was the TV tower, broadcasting the transfer of BBC. And quite recently the republic did not share the oil well located in the disputed territory.


Conflicts on the Kyrgyz-Uzbek border are not uncommon. At times, they result in gunfights, deaths and riots. Meanwhile, the status of these conflicts in the near future may change. After Kyrgyzstan joins the Customs (and in the future Eurasian) Union, Tashkent will deal with one of the allied states, which is also a member of the CSTO.

Who owns the TV tower

At this time, the cause of the confrontation was the belonging of a relay tower located in a disputed border area in the Aksy region of Kyrgyzstan. The tower, which amplifies the television signal, is located on the mountain Ungar-Too, which Kyrgyzstan considers its own and Uzbekistan its. The delimitation and demarcation of the state border in this area are not completed, which allows both sides to claim it. 20 September 15 of Uzbek border guards, who unexpectedly arrived by helicopter, checked the personnel of the tower and put up two posts near it. The Kyrgyz border guards who took the object under their protection also arrived.

The actions of border guards, as often happens in this area, caused the mobilization of the local population on a group (ethnic) basis. Near the building of the Akimat (administration) of the Aksy district of Kyrgyzstan, about 150 local residents gathered. Rumors began to circulate among the Kyrgyz population that the Uzbek border guards had captured a television tower and even used Tanks.

Both sides were quick to declare that the territory of the Ungar-Too mountain belongs to them. However, its status has not yet been determined. According to the Kyrgyz Internet resource “Vesti.kg”, 1959 cards of the year are located on the territory of Kyrgyzstan, and Uzbekistan’s 1985 maps. In this case, the station itself is valid from the 1967 year. A version appears in the media that the transmitter of the British radio station Bi-bi-si, which broadcasts not only to Kyrgyzstan, but also most of the Namangan region of Uzbekistan, is causing the conflict, causing discontent in Tashkent. However, all appeals of Uzbekistan on this issue remained unanswered.

October 2 conflict was resolved. Both sides removed their border posts, and the relay tower, along with Ungar-Too, returned to its former status as a disputed territory. However, the border conflicts of Uzbekistan with Kyrgyzstan, as well as with other countries in the region are not over.

The total length of the Kyrgyz-Uzbek border is 1 378 kilometers. The described and consistent ones are 1007 km, and 371 km (which is 27%) remain controversial. Differences cause 58 sites, 28 of which are located just on the territory of Ala-Buka and Aksy areas. The borders between the republics during the Soviet period were administrative, the generally accepted line of their passage did not exist, and it is not easy to delimit them in the conditions of mountainous terrain. The current situation creates the ground for border conflicts that regularly arise between Tashkent and Bishkek since the collapse of the USSR.

Conflict situations on the border - a constant phenomenon. On September 23, Kyrgyz border guards wounded a citizen of Uzbekistan who, together with two other women, “penetrated deep into the territory of Kyrgyzstan” in the Zhide-Aryk area of ​​the Kadamzhai district of the Batken region. Application cases weapons with a fatal outcome are not uncommon from the Uzbek side. 4 January this year, Uzbek border guards shot dead a Kyrgyz citizen who, according to their version, illegally crossed the border to commit a smuggling transaction. Recently, Uzbekistan unilaterally closed 8 checkpoints in the south of Kyrgyzstan, without notifying Kyrgyzstan. Enhanced pass mode, which allows you to cross the border, only having an invitation from a citizen of Uzbekistan, a plane ticket to a third country or the news of the death of a close relative, was introduced on August 8.

Particularly acute problem are the enclaves inherited by the republics of the region from the USSR. In total, there are 8 enclaves in the Fergana Valley, which is divided between Kyrgyzstan, Uzbekistan and Tajikistan. In Kyrgyzstan, there are Uzbek enclaves of Sokh and Shakhimardan, administratively related to the Fergana region of Uzbekistan. The largest enclave is Soh, where in the territory of 352 square. km are 19 settlements and live almost 60 thousand people, 99% of which are Tajiks. It also houses the Tajik enclave of Vorukh, which belongs to the Sogd region of Tajikistan. In Uzbekistan, the Kyrgyz village of Barak is located with an area of ​​4 square. km with a population of several hundred people. The borders of the enclaves, cut off from the territory of the "metropolis", are a zone of constant conflict.

At the beginning of the year, one of these conflicts escalated into riots. On January 6, residents of the Uzbek village of Khushyar, located on the territory of Sokha, dissatisfied with the installation of power transmission poles on their territory by Kyrgyz border guards, attacked the neighboring Kyrgyz village of Chabrak. Having seized several dozen hostages, they forcibly took them to the enclave territory. In response, the Kyrgyz blocked all roads connecting the enclave with Uzbekistan, and it was blocked. The next day, the hostages were released, and the Uzbek side pledged to compensate for the cars burned during the riots and moral damage. But the roads around Sokh remained blocked for several more days, causing a rise in prices for food and essential goods. Moreover, not only the residents of Sokh experienced difficulties, but also the neighboring Kyrgyz villages, as the roads connecting them to the “mainland” run through the Uzbek enclave.

Periodically, the borders of the enclaves and closes Uzbekistan. Thus, in August, the authorities of the republic in connection with the celebration of Independence Day (1 of September) restricted travel to Sokh and Shakhimardan, and also closed three checkpoints on the southern border of Kyrgyzstan. As a result, residents of the Kyrgyz enclave Barak began to experience problems, deprived of the opportunity to visit Kyrgyzstan. Trying to at least partially solve the problem of enclaves, Kyrgyzstan is laying new transport routes. In September, the construction of a road around Sokh was completed, which will allow the residents of the village of God to get to the district center, bypassing the enclave.

The problem of borders and enclaves remains one of the most pressing issues in Kyrgyzstan’s relations with Uzbekistan and Tajikistan. After joining the Customs Union, it will cease to be only an internal affair of the republic and will acquire an all-union character. Border control is one of the key conditions for the efficient operation of a common economic space. The inevitable, in particular, is the creation of customs posts on the external borders of Kyrgyzstan. The Allied states should think about this problem even before the republic becomes a member of the union, importing its own border problems into it.

Ctrl Enter
Noticed oshЫbku Highlight text and press. Ctrl + Enter
We are
The sleeping giant of Central AsiaBorder conflicts: Blood education
83 comments
Information
Dear reader, to leave comments on the publication, you must to register.