November 1 2013
37
At the end of the twentieth century, an interesting trend emerged - many states, even very small ones, are trying to organize the production of their own military products, at least ammunition and small arms. weapons. At the same time, they begin to move from licensed and screwdriver production to their own and joint development, self-modernization of foreign technology. And even offer their products for export.


In this regard, the experience of creating a multi-caliber RPG-32 “Nashshab” (“Hashim”) grenade launcher is interesting. Developed in Russia by order of the King of Jordan, it is assembled at a joint venture in Jordan mainly from Russian components. And will be sold throughout the Middle East.

In the post-Soviet space, Ukraine, Azerbaijan, Belarus and Kazakhstan are actively developing the design and production of weapons. One of the latest developments presented by Ukraine is the UAG-40 universal automatic grenade launcher for NATO’s standard grenade 40х53 mm in metal М16 (USA).

Last September, the final version of the UAG-2013 universal automatic grenade launcher was shown at the exhibition “Arms and Security - 40” in Kiev. This machine-mounted grenade launcher was developed at the KB "Precise Mechanisms", as the management of the company modestly notes, with the participation of specialists with foreign experience in weapons development. However, it is no secret that the UAG-40 was created in Belarus. And in its promotion on the world market, the foreign trade organization “Belspetsvoentekhnika” participates. 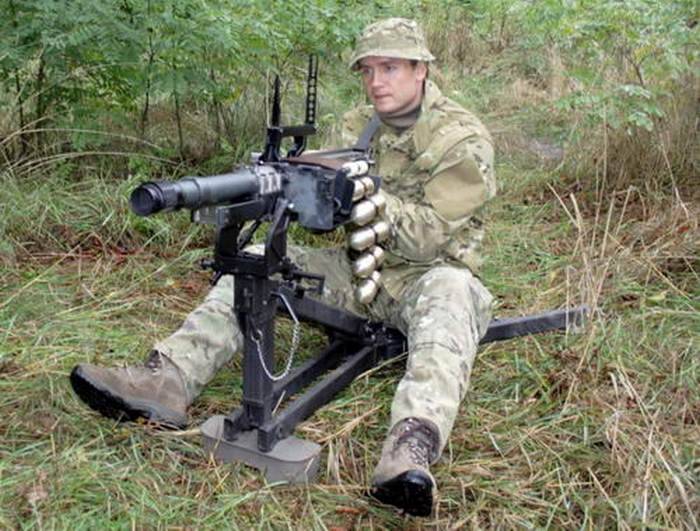 A three-stage cutting of the barrel, a friction shutter damper consisting of cantilever springs located on the inner surface of the body, and a muzzle brake reduce recoil. The design of the muzzle brake is such that the powder gases flowing out during a shot not only reduce the recoil momentum by half, but also reduce the toss of the barrel. Since the gases are almost not beating down, there is no cloud of dust unmasking raised from the ground.

To control the fire on the back of the case there are two handles with a variable position - vertically or horizontally, adjustable by a grenade thrower. Or one handle and shoulder rest. On the right-hand grip there is a release button, switched to a single fire or firing bursts. Special fuses-latches on the shutter and the release key exclude a random shot. Both latches are connected to a common lever, therefore, they are locked and, conversely, opened in one motion. 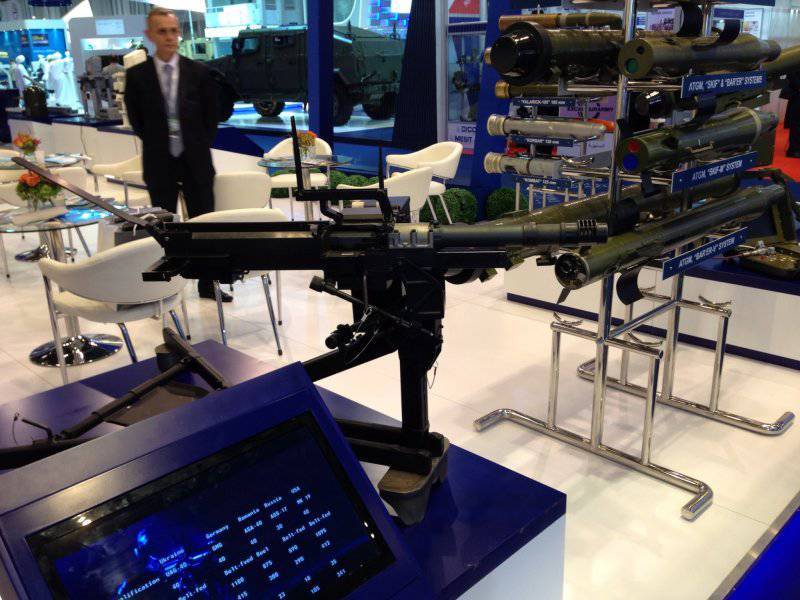 The mechanism of UAG-40 is based on automation with a free gate. Nakol cap and shot are made in the reel of the shutter. The mechanical sight is mounted in a handle for carrying a grenade launcher on top of the body. In preparation for the shooting two aiming strips rise to the top.

Pilot production began at the shipbuilding enterprise of Leninskaya Kuznya OJSC in 2010. Enterprises in Kiev (“Satmash”), Kharkov, Chernigov and Sumy are involved in industrial cooperation. This year, shipbuilders manufactured a pre-production batch of 12 grenade launchers. By the end of the year, mass production of 500 units per year can be launched.

Since the UAG-40 for TTX is an analogue of the American grenade launcher Mk.19 mod.3 and HK GMG of the German company Heckler-Koch, he has nothing to do on the European armament market. It is assumed that the Ukrainian "stanker" may be of interest to the army of some countries in Asia, Africa and Latin America. It is positioned primarily as a weapon for highly rugged terrain or for installation on armored personnel carriers, jeeps and other wheeled and tracked vehicles. It is believed that it does not require prepared positions.

But there is one problem - the UAG-40 machine is so high that the operator is in a sitting position. Lying can not shoot. And the design of the machine does not allow, for example, to put it on the window sill. Therefore, the creators of the grenade launcher do not say anything about its use in urban or industrial buildings. And now it is one of the main trends in the use of such weapons.

Another important issue is the competitive price. The long-established US Mk.19 mod.3 costs 14 thousand dollars, Heckler-Koch is not cheaper. Produced in small batches of UAG-40, according to experts of the Russian OJSC “Plant named after V.A. Degtyarev ”will cost about 20 thousand dollars. Although the leaders of the“ Precise Mechanisms ”and“ Leninskaya Forge ”claim that their products will be cheaper than their foreign counterparts, they do not even give an approximate price.

It is hoped that the Ukrainian army will acquire the UAG-40. But they require the mandatory production of their own ammunition. So now there is a development of the Ukrainian, and perhaps Belarusian, 40-millimeter grenades. When she passes the test and receives a certificate of validity, then we can talk about purchases

In turn, Russia presented the final version of the AGS-2013 “Balkan” automatic caliber 40 mm at the international weapons exhibition IDEX-40 in the UAE. This is an innovative weapon in which a new principle is applied - a mortar shot with a departing sleeve.

Oleg Chizhevsky, General Director of the Pribor company, said of him: “No one has this. This principle makes it possible to almost double the use of the mass of explosives and, accordingly, increase the fragmentation due to the more dense layout of the projectile. Thus, a significant reduction in mass and an increase in the power of the weapon are provided. ”

According to him, the mass of explosive in the shells to the "Balkan" brought to 90 grams instead of 40 grams. The firing range of the new grenade launcher was increased to 2500 m. Its mass is almost equal to the mass of 30 mm AGS-17 “Flame” grenade launcher, which is in service with the Russian army - about 32 kg. "Balkan" is regularly equipped with an optical sight.

Now the Balkan is undergoing state tests, which should end before the end of this year. If there is a state order, production will begin in conjunction with the Izhmash plant, that is, with the Kalashnikov concern.

Ctrl Enter
Noticed oshЫbku Highlight text and press. Ctrl + Enter
We are
Su-30M arrived in Kazakhstan!"Supergranatomulet" UAG-40 still can not oust the Soviet AGS-17 from the Ukrainian army
37 comments
Information
Dear reader, to leave comments on the publication, you must to register.